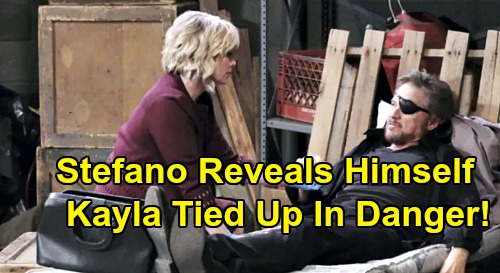 Days of Our Lives (DOOL) spoilers tease that Kayla Brady (Mary Beth Evans) will push Stefano DiMera (Stephen Nichols) to his limit. He’ll finally get so fed up with Kayla that he blurts out the truth at the hideout.

“Steve Johnson” will admit that he’s not the man Kayla once loved so much – and will love forever if she’s being completely honest with herself. He’s the great Stefano DiMera.

Of course, Kayla will think that’s crazy talk. She just won’t buy his news, but Stefano will work to convince her. Days of Our Lives spoilers say Stefano will have detailed updates about how his “essence” was put into Steve’s mind and body.

Stefano’s mind took over and now the real Steve is gone. Stefano will even take off his patch and show Kayla his two working eyes as further proof.

Days spoilers state that Kayla will finally believe Stefano, especially once she considers all of “Steve’s” bizarre behavior. “Steve” signed the divorce papers like they were nothing and has been quite cold to Kayla since he returned to town. He also skipped Adrienne Kiriakis’ (Judi Evans) funeral and has become just an all-around jerk.

“Steve” even made a major memory gaffe recently, so DOOL spoilers say it’ll all click into place for Kayla. She’ll accept that this is Stefano – or at least a version of him. In some ways, it’ll be a relief since Kayla will know there’s a reason “Steve” has been acting so nasty.

In other ways, it’ll be horrifying since Kayla will be trapped with Stefano. He’s proven that he’s a very dangerous man when he wants to be.

Kayla will naturally want the real “Steve” back – both because she adores him and because he’s not a threat like his new persona. Days of Our Lives spoilers say Kayla will think she can bring Steve back to the surface with the power of her love.

She’ll make a passionate speech in hopes of coaxing the real Steve to push through and make his return.

Sadly, Kayla’s plan won’t work, so she’ll try to make a desperate escape. Days of Our Lives spoilers say Stefano will thwart that plan and get menacing as he restrains Kayla. She’ll be left wondering what terrifying move Stefano’s going to make next!

Days spoilers say Kayla will fear for her life during the week of February 17-21, so don’t miss what’s in store. More updates and news will emerge as this DOOL storyline gets even hotter, so be sure to check CDL frequently for exciting posts.