Days of Our Lives Spoilers: Stefano’s Wild Deal With Justin – Trades Marlena In Exchange For Kayla

BY hellodrdavis on February 17, 2020 | Comments: one comment
Related : Days of Our Lives, Soap Opera, Spoiler, Television 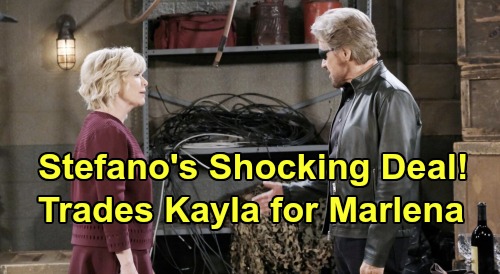 Days of Our Lives (DOOL) spoilers tease that Kayla Brady (Mary Beth Evans) will soon find herself in a very dangerous situation. As DOOL viewers know, she’s currently in a warehouse with Stefano DiMera aka Steve Johnson (Stephen Nichols) and she’s under the belief that she’s dealing with Steve.

Kayla reluctantly agreed to help him, not knowing that he was actually Stefano or that she’d end up in grave danger.

Well soon, it seems that Stefano will get fed up with Kayla and all of her griping about Steve’s behavior and decisions over the past year. He’ll finally reveal himself as Stefano, and Kayla will be absolutely stunned. In fact, it looks like she won’t believe the whole story of how Stefano’s “essence” was put into Steve’s brain at first.

But as she thinks about how strange Steve has been lately, it will eventually make sense to her, especially when she factors in that Wilhelm Rolf (William Utay) has been involved in the whole thing. DOOL spoilers say that Stefano will rip off his eye patch, informing Kayla that Rolf even gave him a new eye.

While this will all make some sense to Kayla, she’ll soon find herself in a difficult spot. Realizing that she’s alone with the dangerous Stefano, she’ll want to flee, but it seems that Stefano will restrain her and ultimately hold her against her will. And since Stefano has sabotaged Kayla’s phone, she won’t be able to call for help.

Well, while all of this is going on, there will be people frantically looking for Kayla. Justin Kiriakis (Wally Kurth) will be beside himself with worry, especially as he gets updates from Marlena Evans (Deidre Hall), John Black (Drake Hogestyn), and Roman Brady (Josh Taylor) about what Kayla’s up against…the Phoenix himself.

But the trick will be actually finding Kayla and Stefano, which it doesn’t seem like anyone will be able to do. Of course, Stefano can’t hold onto Kayla forever, and after a while he’ll decide to make a move.

According to DOOL spoilers, he’ll suddenly appear on Justin’s doorstep with a big offer – he’ll want to make an exchange. It looks like a stunned Justin will hear that Stefano wants Marlena in exchange for Kayla.

Of course, that’s a deal that it’s hard to imagine anyone agreeing to, but those will be Stefano’s terms. Stefano might even threaten to harm Kayla unless he gets his “Queen of the Night” in return.

But what will Justin’s next move be? Would he actually consider giving up Marlena to get Kayla back? Under normal circumstances he probably wouldn’t, but given that he recently lost Adrienne Kiriakis (Judi Evans), he might want to prevent another major loss.

The more likely solution is that Justin might go directly to John and Roman and spill that he’s just had an interaction with Stefano. From there, they’ll need a plan for how to get Kayla back without putting Marlena directly in harm’s way.

It looks like we’re going to see some exciting scenes as Kayla struggles with Stefano, while Justin and the rest try to get her back safely without sacrificing Marlena in the process. Keep checking back with CDL for all of your Days of Our Lives updates, news, and spoilers – we’re your source for DOOL!