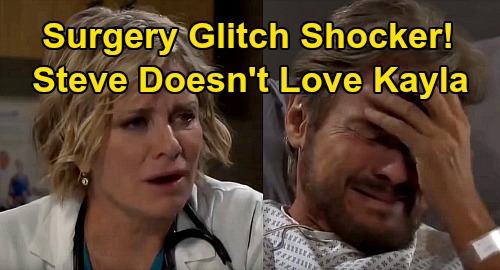 Days of Our Lives (DOOL) spoilers tease that Stefano DiMera aka Steve Johnson’s (Stephen Nichols) dangerous surgery will move forward. There are risks with any procedure like this, but those risks are especially high when you’re trying to undo Dr. Wilhelm Rolf’s (William Utay) wild sci-fi breakthroughs.

That’s why Kayla will proceed with caution as she preps Stefano for his operation and hopes for the best. Since it appears Dr. Rolf will be unwilling to betray Stefano, Kayla will have to perform the surgery herself. It’s fitting for the fate of Kayla’s true love to be in her hands.

Unfortunately, there’ll be an unexpected snag during this surgery. Sarah Horton (Linsey Godfrey) will help Kayla as they tackle this emergency complication together. There could be some scary moments in that operating room, but Kayla will try to stay focused and strong. Steve’s life depends on it!

Days of Our Lives spoilers say Kayla will manage to pull off the procedure in the end. Steve will survive having his chip removed, but it’ll still be a waiting game. As Steve remains unconscious following the surgery, Kayla will sit by his bedside and most likely reflect on happy memories. Steve and Kayla had a wonderful relationship once upon a time, so part of Kayla may wonder if they could get back to that.

However, Days spoilers say there’ll be another snag during the recovery process. When Steve first awakens, he won’t remember his love for Kayla. It sounds like DOOL fans could see something similar to what happened with Marlena.

Since Marlena wasn’t completely transformed, John Black (Drake Hogestyn) was able to snap her out of her trance for the most part. Even so, Marlena still had moments of concern for Stefano. She grew frustrated with herself for still caring, but John and Brady Black (Eric Martsolf) reassured her it was due to the microchip.

Stefano talked about it taking some time for his “essence” to sink into Steve, so it may take some time to pull it out as well! There may be some Stefano elements that have steeped deeper into Steve’s consciousness. Those elements could be masking Steve’s buried feelings, which will be waiting to rise to the top with a little help.

After Marlena receives her own successful surgery, she’ll step up to help Steve. Days of Our Lives spoilers say Marlena will hope to jog Steve’s memory – and it looks like it may work.

Regardless, DOOL viewers can expect Steve’s love for Kayla to come flooding back during the week of April 13-17. Steve will be overwhelmed as he remembers their beautiful love story, but will he be able to continue it?

That’s what Steve will want to know soon, but the ball will be in Kayla’s court. A “Stayla” reunion is coming, but Kayla will have to decide when she’s ready to make the leap. We’ll offer updates as other Days news emerges.

Are you glad Steve’s getting back to normal? Are you rooting for Steve and Kayla’s romantic future? Be sure to check out CDL frequently for other hot Days of Our Lives spoilers, news and updates.