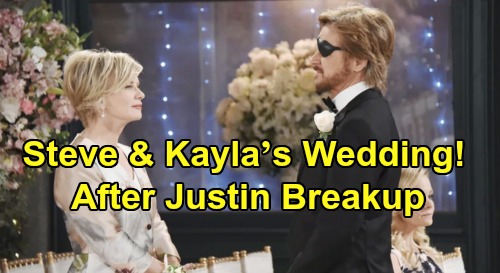 Days of Our Lives (DOOL) spoilers tease that Steve Johnson (Stephen Nichols) and Justin Kiriakis (Wally Kurth) will fight for the woman they want. While Steve was out of the picture, Justin found love with Kayla Brady (Mary Beth Evans). It caught them both by surprise, but it was exactly what they needed when they needed it.

Justin thought he’d never get over losing Adrienne Kiriakis (Judi Evans) – and the loss still stings. However, Kayla gave Justin hope for a bright future again. Justin certainly doesn’t want to let go of that hope, so he’ll cling to it and count on his plan to pay off.

Justin will feel like he can keep Kayla by his side if he shows her the depth of his love. Although Justin may score a brief victory, it’s not going to last. Days of Our Lives spoilers say “Stayla” will reunite sooner or later, which is the way it should be. Justin’s a nice guy, but he isn’t Kayla’s true love. She belongs with her soulmate, which is definitely Steve.

What happens once Steve and Kayla ultimately get back together? Technically, those divorce papers Steve signed should be meaningless. Steve wasn’t in his right mind when he signed them; he wasn’t in his mind at all! DOOL viewers know Steve was transformed into Stefano DiMera, so he was the one who ended Steve’s marriage to Kayla.

Of course, Days seems to be ignoring this issue for the most part. There could be a good reason for that since it gives Steve and Kayla the opportunity to get married again! Everyone loves a heartfelt soap wedding, right?

Days recently delivered some great flashbacks of “Stayla’s” old nuptials, so it’d be fitting for them to tie the knot again. Kayla and Steve deserve a chance to recommit in front of their loved ones. After everything they’ve been through, this would be an excellent way to cap off all the drama.

Steve and Kayla could say some sweet vows as they start a new beginning. It’d serve as a fresh start for “Stayla,” so Kayla and Steve fans are certainly rooting for it. Let’s hope a beautiful wedding follows this inevitable reunion. As other Days updates emerge, don’t forget to check back often for more DOOL news.