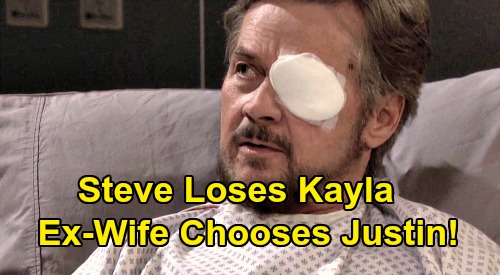 Days of Our Lives (DOOL) spoilers tease that Kayla Brady (Mary Beth Evans) has a big decision on her hands. As DOOL viewers know, her ex-husband Steve Johnson (Stephen Nichols) just made it through brain surgery, and he’s awakened but currently had no memory of who he is or who Kayla is. That’s left Kayla crushed and seriously worried that she might have caused Steve’s brain damage during surgery.

But the good news here is that Steve will soon be Steve again. According to DOOL spoilers, Steve will soon get his memories back, including his memories of his love with his “Sweetness.” And once Steve is back and he and Kayla have shared some tender moments together, Kayla is going to realize that she’s got a major decision to make.

As DOOL viewers know, Kayla has been living with Justin Kiriakis (Wally Kurth) for a while now, and the two have been very happy together. Kayla truly loves Justin, but now she’s going to have to decide who she wants to be with.

It’s going to be a rough road for Kayla, with Steve basically waking up and thinking that no time has gone past since his capture. As far as Steve knows, he’s still married to Kayla, and she should welcome him home with open arms.

Well, Steve will have a lot to catch up on, since a lot has gone on since he was last awake and conscious as himself. Steve’s going to learn that Kayla was led to believe that he abandoned her and that he wanted a divorce.

Steve will learn all about his sister Adrienne Kiriakis’ (Judi Evans) death, and how Kayla is now with Adrienne’s widower Justin. It’s going to be a lot for Steve to deal with all at once.

It seems, however, that one thing will ring true for Steve, and that’s his love for Kayla. He’ll tell Justin in no uncertain terms that Kayla’s his wife and that he wants her back.

But sooner or later, Steve will see that Kayla’s really torn up about being stuck between two men that she loves. And, according to Days of Our Lives spoilers, Steve will reach a shocking decision regarding Kayla.

DOOL viewers know how strong Steve and Kayla’s love is, and Steve could decide that in light of what’s happened, he needs to step back and let Kayla stay on the course she’s currently on.

It would be a heart wrenching decision for Steve, but his love for Kayla could cause him to let her go, thinking that she needs to let her relationship with Justin run its course for the time being.

Steve could be playing the long game here, thinking that he and Kayla will eventually be together, but that he needs to stop pressuring her for now. It would be a decision of love, and it totally sounds like something Steve might do for his true love.

And ultimately, it might make Steve seem like an even more attractive option relative to Justin in the end!

We’ll see what happens here, but Steve’s big decision is going to be a shocker. Do you think that Steve will tell Kayla that he’ll let her go if it’s what she wants? Stick with Days of Our Lives, and remember to keep CDL bookmarked for all your latest soap news and updates. We’ve got you covered for all the hot DOOL spoilers!