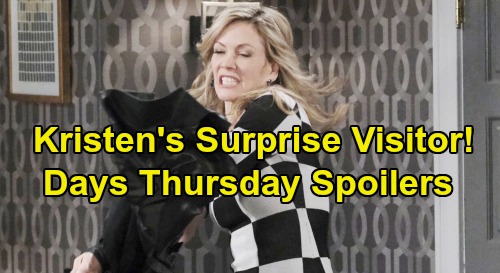 Days of Our Lives (DOOL) spoilers for Thursday, January 9, tease that Xander Kiriakis (Paul Telfer) will deliver a fierce warning. He’ll tell Ciara Brady (Victoria Konefal) to stay away from Victor Kiriakis (John Aniston) and stop stirring up trouble. Xander holds Ciara responsible for Victor’s medical crisis, so he thinks she’s done more than enough. He’ll feel like Ciara will back off if she knows what’s good for her.

Of course, Ciara can’t rest until Ben Weston (Robert Scott Wilson) walks free, so she’ll hold out hope that she can get some answers from Victor. She also wants her grandpa to recover, so she’ll have another reason to stay close.

Meanwhile, Brady Black (Eric Martsolf) will have a decision to make. When he finds out about Nicole Walker’s (Arianne Zucker) latest lie, Brady will have to decide whether to back her up or not.

Days of Our Lives spoilers say Brady will play along and act like he’s in love with Nicole. He’ll worry about Kristen DiMera (Stacy Haiduk) making Nicole a target, but he’ll ultimately take the risk and count on Nicole’s plot to work.

Brady clearly still has feelings for Kristen, but he’ll want to keep her at a distance and Nicole could help him achieve that.

Other Days of Our Lives spoilers say Jack Deveraux (Matthew Ashford) will unleash his wrath. He’ll confront “Steve Johnson” aka Stefano DiMera (Stephen Nichols) and wonder what in the world he was thinking.

Jack will be furious with “Steve” for his harsh treatment of Kayla Brady (Mary Beth Evans). He’ll feel like “Steve” hurt Kayla more than he can even imagine.

“Steve” will insist that Kayla moved on with Justin Kiriakis (Wally Kurth), so it all worked out. However, Jack just won’t see it that way. He’ll think “Steve’s” actions are simply inexcusable – especially since “Steve” skipped Adrienne Kiriakis’ (Judi Evans) funeral as well.

Jack just won’t even recognize his brother anymore, and there’s a good reason for that. DOOL fans know “Steve” has Stefano’s memories at the moment, so he’ll continue to scheme on Thursday. Days spoilers state that Kristen will get a visit from someone surprising. It looks like “Steve” will show up on Kristen’s doorstep and prepare to test her loyalty.

Some great drama’s coming up in Salem, so don’t miss all the action. We’ll give you updates as other Days news emerges. Stick with DOOL and don’t forget to check CDL often for the latest Days of Our Lives spoilers, updates and news.