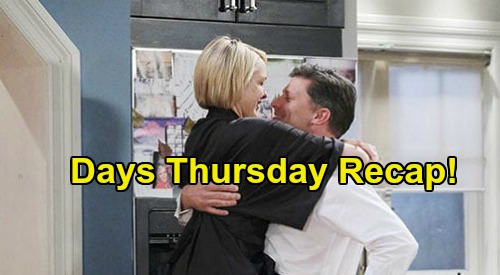 Days of Our Lives (DOOL) spoilers recap for Thursday, July 16, reveal that Ivan Marais (Ivan G’Vera) confirmed that Jake Lambert (Brandon Barash) was Stefan DiMera’s (Brandon Barash) twin brother. Ivan explained most of the story off-screen, adding that Jake was born very small and sickly, and that he went into an incubator immediately. Ivan said that he never told Vivian Alamain (Louise Sorel) about the second baby so she wouldn’t grieve a baby needlessly.

Gabi DiMera (Camila Banus) looked horrified, and Jake called the adoption agency and verified Ivan’s tale. Gabi cried, “So you’re not my Stefan?” “No, I’m afraid not,” Jake said. Gabi put her head down on the table, and Jake kneeled down next to her.

“You really loved him, didn’t you?” Jake said. Gabi nodded. Jake said he was sorry, and that Stefan was lucky to have someone love him the way that she did.

Vivian inappropriately chimed in that there was something to celebrate – she had a new son! Gabi ran out, upset, and Jake took off after her. Vivian lamented, saying that she wanted to get to know Jake, but Ivan suggested that they try to figure out how to get her off of her attempted murder charges.

Vivian just wanted to talk about her suave Stefan, and how he compared to this “lump” Jake. Suddenly, Vivian got an idea, prompting a worried look by Ivan.

At the DiMera mansion, Gabi spoke to Stefano DiMera’s (Joseph Mascolo) portrait, saying that she’d lost Stefan again. Jake showed up to offer her comfort and noticed Stefano’s portrait. “Is that my father?” Jake said. 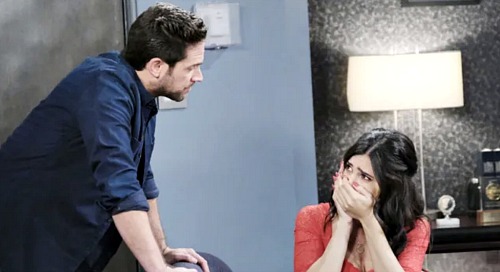 Gabi confirmed, then yelled at Stefan to leave after accusing him of being there for the money. Gabi lamented that she never wanted to see “that face” again.

Talk soon turned to Eric Brady (Greg Vaughan) and Nicole Brady’s (Arianne Zucker) wedding, and “WilSon” explained that they spent time with Justin rather than go to the wedding.

Will told Sonny that he was a bit afraid to go to the wedding, out of fear that Sami Brady (Alison Sweeney) would show up. Will said that he was hoping to keep a low profile so that Sami wouldn’t find out that he knew about Allie Horton’s (Lindsay Arnold) pregnancy.

Meanwhile, in the park, Allie was sitting with Marlena Evans (Deidre Hall) when she got a call from Lucas Horton (Bryan Dattilo) saying that Sami was in town. Allie said that she knew, and that Sami had crashed Eric and Nicole’s wedding.

Marlena and Allie talked, and Marlena pointed out that Allie hadn’t behaved perfectly with Sami, and that Sami cares about Allie. Allie got it, and she agreed that she needs to go back and talk with her mother.

Lucas came along, and together he and Allie left to go see Sami at the Brady Pub. Marlena called Will to say that Sami showed up at the wedding. “Oh, my God,” Will said.

Later, Marlena arrived at the Kiriakis mansion and told Will and Sonny the whole story of the wedding and Sami’s appearance there. “So, another Salem wedding ends up in a bench-clearing brawl,” Will mused.

Will and Sonny wondered if Sami knew that they wanted to adopt Allie’s baby. Marlena didn’t know, but she assumed that Sami was probably about to find out.

Will then had a thought, saying that if Sami thinks that it’s between Rafe Hernandez (Galen Gering) and them to adopt the baby, then Sami would probably prefer that they be the adoptive parents.

But then, Will realized that Sami might want to live with them or visit often. “God help us if that happens,” Will said, as Marlena nodded knowingly.

At the Brady Pub, Nicole told Sami that she didn’t turn Allie against her – Sami did that all on her own. Sami lunged at Nicole again, calling her an interloper. Eric forced Sami to sit down and he told Nicole to go get cleaned up while he talked with Sami.

Eric then turned to Sami and told her that Allie showed up on his doorstep saying that she was pregnant and didn’t want Sami to know. Eric explained that Nicole welcomed Allie into their home, and now Sami ruined their wedding.

Sami apologized, and Eric said, “No you’re not – you’re pleased with yourself.” Eric pointed out that Allie didn’t want to tell Sami about the pregnancy because Sami would make things worse. “You proved her right in spades,” Eric said.

Sami said that Allie didn’t have to give her baby up for adoption now that she knew about it, and Eric told Sami to stop and that Allie had a plan about who was going to adopt her baby.

Sami tried to get Eric to tell her who was going to adopt the baby, but Eric wouldn’t, saying that it was Allie’s call. Allie and Lucas walked in, and Eric took off to go regroup with Nicole at the apartment. Sami then apologized to Allie and wanted to start over. Allie said that she loved Sami, but that she didn’t want Sami anywhere near her baby.

Lucas stepped in and refereed a little, telling Sami to back off when she started coming on too strong about helping Allie raise the baby. Allie said that she didn’t want to raise the baby, and that she was thinking about giving the baby to someone in their family.

Off-screen, Allie told Sami about Will and Sonny wanting to adopt the baby. Sami actually liked the idea, but then Allie disclosed that she had already offered the baby to someone else – Rafe. Sami got wide-eyed.

At Eric and Nicole’s apartment, Nicole walked out in slinky lingerie and kissed Eric. Nicole apologized for the cake brawl and lamented about how the wedding was ruined. Eric disagreed, but he did note that the wedding cake was collateral damage.

Nicole complained, saying that she wanted to save the cake topper for their anniversary. Eric then showed Nicole a box on the table that had their cake topper in it. Nicole was thrilled.

Eric picked up Nicole and carried her to the bedroom, where the two kissed and made love. Afterwards, Nicole said she couldn’t believe they were married. Eric and Nicole declared their love for each other and kissed happily.

There’s definitely a lot going on right now on Days of Our Lives, so stay tuned! We’ll give you updates as DOOL news comes in. Stick with the NBC soap and don’t forget to check CDL frequently for the latest DOOL spoilers, news, and daily recaps.