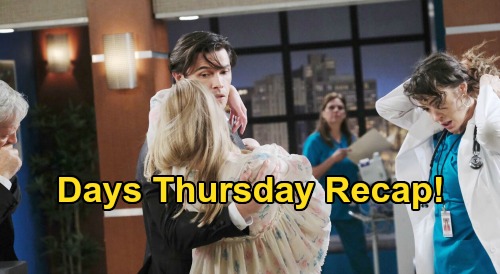 Days of Our Lives (DOOL) spoilers recap for Thursday, July 23, reveal that Ciara Brady Weston (Victoria Konefal) lay in the rubble in the sanctuary as smoke and fire raged around her. Viewers saw quick flashes of scenes, including Xander Kiriakis (Paul Telfer) and Sarah Horton (Linsey Godfrey) trying to make sense of what just happened. Xander said that there was an explosion of some sort, and they separated to start evacuating people.

Nearby, John Black (Drake Hogestyn) called out, “Doc!” Suddenly, Will Horton (Chandler Massey) ran up and said that Marlena Evans (Diedre Hall) was ok and had gotten out of the church.

John wondered where Allie Horton (Lindsay Arnold) was and whether the baby was ok. Elsewhere in the sanctuary, Rafe Hernandez (Galen Gering) and Jake Lambert (Brandon Barash) hauled Gabi DiMera (Camila Banus) out of the building with a sprained ankle.

Lani Price Grant (Sal Stowers) and Eli Grant (Lamon Archey) coughed and Eli wondered if the baby was ok. Lani said that she thought she was fine, and that they needed to find Doug Williams (Bill Hayes) and Julie Williams (Susan Seaforth Hayes).

Shawn Brady (Brandon Beemer) came by and said that Doug and Julie were ok and outside. Shawn went looking for Hope Brady (Kristian Alfonso) and found her, giving her a big hug.

Hope and Shawn found Ciara, who immediately worried about Ben Weston (Robert Scott Wilson). Ciara yelled out for Ben and saw that the vestibule area was engulfed in flames and blocked by rubble.

Shawn and Hope wanted to get Ciara out of there, but she refused. Rafe bellowed out that everyone needed to get out of the church and that it wasn’t safe. Allie fainted and Xander picked her up and carried her out.

Outside the church, Doug and Julie worried about everyone inside. Soon, Jake and Gabi came along, and Julie snarked that “of course” Gabi would survive the blast. Lani and Eli came outside, too, and Doug and Julie took Lani to the hospital to get checked out while Eli went back in the church to help.

At the hospital, John and Will stood by near the nurses’ station while Sarah hurriedly put on a lab coat. Xander walked up carrying Allie, and Sarah told him to put Allie in a room.

Marlena arrived as well and learned that Allie had fainted and was getting checked out. Back at the church, Rafe told Ciara that the front door of the church was locked, and that the only way to Ben was through the rubble. Ciara sobbed in Hope’s arms.

Back outside the church, Gabi lashed out at Jake for bringing her to the wedding and nearly getting her killed. Jake got miffed and went to leave, but Gabi couldn’t walk due to her sprained ankle, so Jake picked her up and carried her to the DiMera mansion, where Gabi apologized for being a jerk earlier.

Gabi admitted that she was mad at Jake for not being Stefan DiMera (Brandon Barash). Jake softened a bit, and admitted he was worried about Ben.

After a while, Gabi schooled Jake about the DiMera family off-screen, and Jake was floored to learn that he has 11 siblings. Jake confessed that he was afraid the explosion might have been his fault and that the mob could have done it.

Gabi laughed and didn’t think so, arguing that everyone in that church had plenty of enemies. Jake continued to worry about Ben.

Back at the hospital, in Allie’s room, John, Marlena, and Will were there when Allie came to. Allie learned that Xander carried her to the hospital. “The hot guy? That’s embarrassing,” Allie said.

Marlena wanted to call Allie’s parents, but Allie refused, saying they should wait for the test results to come back first. Marlena reluctantly agreed. Later, Will brought Allie some gummy bears and told her that whatever she decided about the baby, he’d respect.

In Lani’s room, Lani breathed in some oxygen from a mask while Doug and Julie hovered around. Soon, Sarah came in and gave Lani an exam, revealing that Lani was spotting.

Lani immediately worried about losing the baby, and Sarah told her not to worry, and that she’d run some tests to see what was going on, but that the fetal monitor looked absolutely normal. Lani said that she couldn’t lose this baby.

Julie returned to Lani’s room and have her a pep talk about how she’s part of a family full of love, and that she was not going to lose this child. “Nothing’s going to happen on my watch,” Julie said.

Meanwhile, back at the church, Ciara was beside herself and told Hope that she wasn’t leaving without Ben. Firefighters moved the rubble around, and Ciara finally got to the vestibule door and peered through a hole in the door. Ciara didn’t see Ben, but she saw his shoe sticking out of the rubble.

Ciara and Hope prayed together, and Eli and Rafe moved the rubble with the firefighters. Eli injured his hand and headed to the hospital. At the hospital, Xander and Sarah talked at the nurses’ station.

Xander asked how Allie was, and he said that the whole situation reminded him of what happened with Mackenzie “Mickey” Horton. Sarah seemed touched by this. Nearby, Marlena and John regrouped and hugged tightly.

Back in her hospital room, Allie ate the gummy bears that Will brought her and they talked about the baby. Allie wondered if Will thought that it was weird that she was so concerned about a baby she was giving up for adoption.

Allie admitted that she has grown to care about the baby, but that she still wants to put it up for adoption. Marlena and John entered, and Marlena had Allie’s test results from Sarah – they were all normal and the baby was fine.

Marlena said that it was time to call Sami Brady (Alison Sweeney) and Lucas Horton (Bryan Dattilo) now. Allie groaned. Over in Lani’s room, Julie led Lani through some breathing exercises, and Eli rushed in.

Lani shared that she was spotting, and Eli got worried. Julie wondered if they had found Ben at the church yet, and Eli said that Ben was stuck under a pile of rubble.

Sarah came in with test results, letting Lani know that the baby was going to be fine. Lani and Eli were thrilled and very relieved. Doug came in and learned the good news.

At the nurses’ station, Sarah and Xander regrouped and Sarah shared that both Allie and Lani and their babies were good. Xander asked if Sarah would go to dinner with him, and Sarah surprised Xander by agreeing. Xander and Sarah smiled at each other happily.

Back at the church, Shawn and Rafe continued to lift the rubble that was presumably piled on top of Ben. Ciara rushed over as they were lifting the last piece of rubble and said, “Oh my God. He’s not here. Where could he possibly be?”

That was a fantastic episode of Days of Our Lives, and there’s plenty more in store for tomorrow. Be sure to stay tuned to the NBC soap and remember to check CDL frequently so you don’t miss any of the latest DOOL recaps, news, or spoilers.