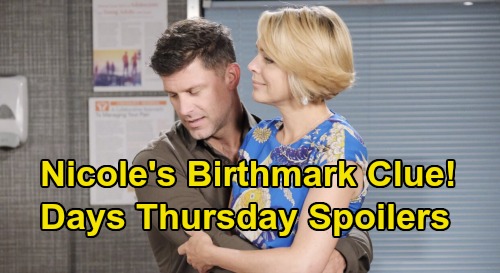 Days of Our Lives (DOOL) spoilers for Thursday, March 12, tease that Will Horton (Chandler Massey) will corner Victor Kiriakis (John Aniston) and unleash his fury. DOOL fans know Will was mistaken about killing Adrienne Kiriakis (Judi Evans), but Victor and Xander Kiriakis (Paul Telfer) had the power to make this right. They’ve could’ve come forward at any time and cleared Will’s name, but that would’ve meant incriminating Maggie Kiriakis (Suzanne Rogers).

Will suffered behind bars for months and watched his marriage to Sonny Kiriakis (Freddie Smith) fall apart. He was separated from Arianna Horton (Sydney Brower) and missed all the usual little moments like recitals – the things that make a childhood memorable and special. Victor at least deserves a good lecture for his part in hiding the truth, so Will’s going to blast him and give Vic something to think about.

Other Days spoilers say Nicole Walker (Arianne Zucker) will grill Xander Kiriakis (Paul Telfer) about the news he’s hiding. She’ll mention Dr. Raynor (Victoria Platt) and remain convinced there’s some secret between them. Naturally, Xander will deny it and push Nicole to back off. He won’t want Nicole getting any closer to the baby swap shocker, but Nicole will indeed take a step toward the truth soon enough.

Over with Kristen DiMera (Stacy Haiduk), she’ll be distraught as she tries to remember her daughter. Kristen only had a few minutes with Rachel Isabella DiMera Black, so she’ll struggle to recall what Rachel looked like. Brady Black (Eric Martsolf) will help Kristen out by remembering some small details – like a tiny birthmark on Rachel’s neck.

Later, Nicole will end up interrupting Brady and Kristen. That’s when Nicole will get updates on this birthmark, which will lay the groundwork for a major revelation. Days of Our Lives spoilers say Nicole will eventually realize Mackenzie “Mickey” Horton has a birthmark in the same place, so the wheels will be turning in overdrive!

Meanwhile, DOOL viewers can expect another heated confrontation between Rafe Hernandez (Galen Gering) and Evan Frears aka Christian Maddox (Brock Kelly). Sonny Kiriakis (Freddie Smith) will join in this time as they keep pushing for David Ridgeway (Caleb and Kyler Ends) info. Both Rafe and Sonny feel guilty for letting themselves get duped, so they’ll be determined to save David from danger.

Days of Our Lives spoilers say Evan will meet up with Orpheus (George DelHoyo) by the time Friday rolls around. Orpheus is Evan’s father, which makes David his grandson. That certainly gives Orpheus a motive to protect David in his own twisted way!

It sounds like some twists and turns are brewing on the NBC soap. As other Days news comes in, don’t miss CDL’s exciting updates. We’ll have lots of Days of Our Lives spoilers to pass along.