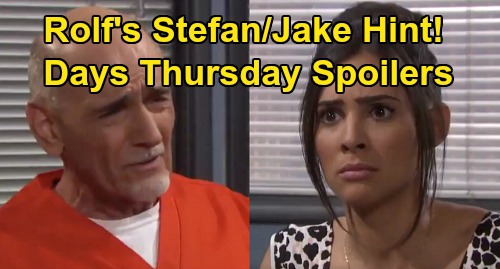 Days of Our Lives (DOOL) spoilers for Thursday, May 21, tease that Sonny Kiriakis (Freddie Smith) will pay Evan Frears aka Christian Maddox (Brock Kelly) a visit behind bars. Now that the truth is out about the Mother’s Day crash, Sonny will think it’s time for honesty. He’ll urge Evan to confess since he already knows the real story.

Whether Evan acknowledges his role in the cover-up or not, Sonny will speak his mind on Thursday. Days of Our Lives spoilers say Sonny will snarl about how much he hates Evan.

After all, Evan could’ve come clean from the get-go and prevented Will Horton’s (Chandler Massey) prison sentence. Instead, Evan made his move and tried to get together with Sonny himself.

Sonny will fume over Evan’s lies and the situation Maggie Kiriakis (Suzanne Rogers) ended up in. Evan watched as his deception snowballed, but he never told the cops what really happened that night.

If it weren’t for Zoey Burge (Alyshia Ochse), no one would’ve known Orpheus (George DelHoyo) caused the accident and hid the truth with Evan’s help.

However, Evan really seemed to care about Sonny despite his horrible secrets. That’s something Evan may insist on Thursday’s episode, but any feelings Sonny might’ve had for Evan are long gone. Even so, Days spoilers say Sonny will manage to get some closure.

These will be Brock Kelly’s final scenes as Evan aka Christian, so stay tuned to see the last of his stint.

Meanwhile, Xander Kiriakis (Paul Telfer) will push Sarah Horton (Linsey Godfrey) to give him another shot. DOOL fans know Sarah just told Xander to leave, but he offered up some shocking info on his way out.

Xander noted that while Sarah was busy in bed with Brady Black (Eric Martsolf), he was off saving her mom from committing suicide.

Sarah and Brady didn’t really sleep together, but Xander certainly rescued Maggie from a grim fate. Days spoilers say Sarah will let Xander stay long enough to spill the details, but her reaction won’t be what Xander was hoping. DOOL fans can expect Sarah to express her gratitude, but she’ll refuse to budge on giving Xander a second chance.

Other Days of Our Lives spoilers say Victor Kiriakis (John Aniston) will agree to what Brady wants. Brady just told Victor to fire Xander, so that’s exactly what Victor will do. Xander will obviously be having a pretty rough day between Sarah’s rejection and getting canned from Titan Industries.

Although Xander will protest, this is fair under the circumstances. The only reason Xander even got the CEO job was because he cooperated in the baby switch. Now it’s time for Brady to reclaim his rightful spot at the top, which means Xander will find himself unemployed.

Back at Statesville, Sarah and Brady will show up to see Maggie. They’ll let her know how glad they are she’s still alive, and Maggie will be grateful for that, too. Maggie might even try to nudge Sarah toward forgiving Xander, but that’s just not something Sarah will be even be willing to think about doing.

Finally, Days of Our Lives spoilers Gabi DiMera (Camila Banus) will be arrested and hauled down to the Salem PD. The lab results showed the drug in the syringe was the same one used to drug Abigail DiMera (Kate Mansi), so that news clearly shocked Gabi.

Lani Price (Sal Stowers) will read Gabi her rights and make sure she’s taken to the station ASAP.

Once Gabi’s in the interrogation room, she’ll find herself sitting across from Dr. Wilhelm Rolf (William Utay). It’ll dawn on Gabi that she walked into Dr. Rolf’s trap, so that’ll bring her back to her crucial question: Is Stefan DiMera (Brandon Barash) alive or not?

It looks like Gabi will remain convinced Jake Lambert (Brandon Barash) is Stefan in the coming weeks, so Dr. Rolf may give her hope. We’ll deliver updates as other DOOL news comes in.