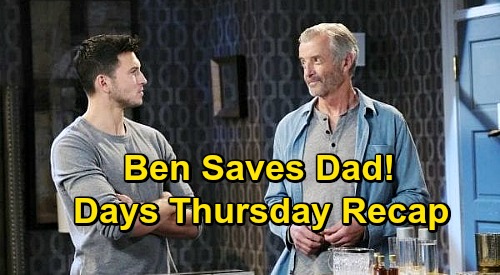 Days of Our Lives (DOOL) spoilers recap for Thursday, October 22, reveal that Shawn Brady (Brandon Beemer) barked instructions to someone via phone at the Salem PD. Lani Price-Grant (Sal Stowers) entered and learned that Shawn was the acting police commissioner.

Shawn was upset about the people of Salem being in danger with the prisoner escape, and he was especially worried that he couldn’t get hold of Belle Black (Martha Madison).

At the Salem Inn, Ben Weston (Robert Scott Wilson) let Eli Grant (Lamon Archey) into his suite while Clyde Weston (James Read) hid in the bathroom. Eli informed Ben about Clyde’s escape and Eli said that he wanted to search the place, which Ben invited him to do.

Eli said that he trusted Ben and didn’t need to search, and he left, asking Ben to let the police know if Clyde reached out.

After Eli took off, Clyde drank some of the hotel room booze and asked Ben to come on the run with him. Ben refused, and Clyde wondered why Ben would want to stay in Salem. Ben picked up the gun and held it in his hand. “For revenge,” Ben said.

At the DiMera Mansion, Gwen Rizczech (Emily O’Brien) and Abigail DiMera (Marci Miller) got impatient waiting in the bedroom for Chad DiMera (Billy Flynn), who was still downstairs. Gwen went down to check on Chad.

Meanwhile, in the living room, Chad argued with Wilhelm Rolf (William Utay), who held him at gunpoint. Chad told Rolf that despite the fact that the microchip was destroyed, the Phoenix would rise again someday, and that Stefano DiMera (Joseph Mascolo) wouldn’t like it if Rolf killed one of his sons.

Chad then overpowered Rolf and got the gun from him.

Gwen arrived in the living room and pretended like she didn’t know who Rolf was. After some back-and-forth, Gwen got Chad to go look for rope to tie up Rolf while she held Rolf at gunpoint.

Down in the living room, Gwen held a tied-up Rolf at gunpoint, and Rolf mused that Gwen had ingratiated herself into Chad and Abigail’s life. Rolf insisted that Gwen help him escape, or else he’d tell Chad all about her true feelings for Abigail.

Gwen balked, saying that Chad wouldn’t believe Rolf, but Rolf pointed out that Chad could check the visitor’s log at the prison, and eventually Gwen agreed to cut Rolf’s ropes with a letter opener.

Back at the Salem PD, Eli returned to find Lani in the squad room. Shawn called Lani, and Lani subsequently revealed to Eli that Rolf was subdued at the DiMera mansion. Lani took off to the mansion to get Rolf and bring him into the station.

Back at the DiMera mansion, Chad and Lani rushed into the living room to find Gwen pretending to be passed out on the floor. Gwen claimed that Rolf cut himself free from the ropes and attacked her, then fled.

Chad was skeptical, and he and Gwen deduced that Rolf must have had the letter opener on him when Chad tied him up. Chad thought it was odd, but he appeared to accept it.

Lani took off to head back to the Salem PD, while Abigail walked into the DiMera living room and learned what had happened with Rolf. Chad wondered exactly when Rolf had time to take the letter opener, while Gwen looked guilty.

At John Black (Drake Hogestyn) and Marlena Evans’ (Deidre Hall) penthouse, Belle arrived to check on her parents in the blackout. Belle learned that Marlena had gone to see Ben, and she decided to stay and keep her dad company in the dark.

Belle opened up to John about how Jan Spears (Heather Lindell) was causing trouble with Claire Brady (Isabel Durant). John heard about how Jan had befriended Claire and tried to bond with her over their mental illnesses.

Belle got upset, thinking that maybe she and Shawn had done something in Claire’s upbringing that caused her to have psychological problems, but John comforted Belle, telling her that wasn’t the case.

Belle said that she just wanted Jan away from Claire at all costs. Eventually, Belle took off, as John left a message for Marlena saying that he was getting worried about her.

Belle went back to Hope Brady’s (Kristian Alfonso) house, where she left Shawn a message via phone. Belle then said to herself that Shawn should hurry back because it was spooky in the dark all alone. Suddenly, Jan walked in with a flashlight, telling Belle that she wasn’t alone.

You won’t want to miss tomorrow’s episode of Days of Our Lives, so stay tuned to the NBC soap! Stick with CDL for all your Days of Our Lives spoilers, daily episode recaps, and news. We’ve got you covered with everything DOOL related!