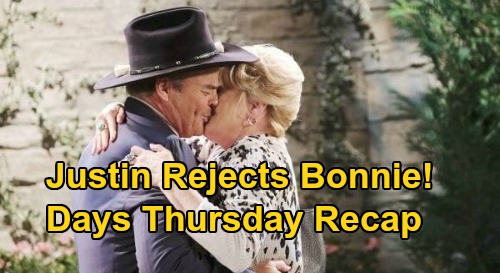 Justin ranted about how he never should have taken Bonnie’s case, and he lashed out at Bonnie for being a con artist and being nothing at all like Adrienne Kiriakis (Judi Evans). Justin threw the cowboy hat at Bonnie and told her to shove it.

At the hospital, Steve Johnson (Stephen Nichols) visited with John Black (Drake Hogestyn) and the men played cards and talked. Steve mentioned Ciara Weston’s (Victoria Konefal) death, and he talked about Marlena Evans (Deidre Hall) and how she was kind and caring.

John suddenly got irate and accused Steve of moving in on Marlena like he did a while back.

Steve was horrified and explained that he wasn’t in his right mind when he went after Marlena earlier this year. John ranted and raved, then he caught himself and told Steve he was sorry and that he was having emotional outbursts as a result of his aneurysm.

Steve said that he could take any outbursts, and that he was just grateful that John was awake and ok.

In Ben Weston’s (Robert Scott Wilson) hospital room, Ben dreamed about the explosion and woke up to find Marlena there with him. Marlena comforted Ben, who thought that he failed Ciara by not finding her in time to save her life.

Marlena urged Ben to lean on the people who cared about him, and Ben urged Marlena to go be with John. Later, Marlena visited Ben again and told him that he was being released.

Gwen awkwardly made some cracks about Abigail and her mental illness, which Jack and Jennifer didn’t appreciate.

Upstairs in Chad DiMera (Billy Flynn) and Abigail’s room, Abigail looked at a photo of herself and Chad and got agitated. “Who is this?” Abigail asked, holding up the picture. “What are you talking about – that’s you,” Chad said.

Turns out, Abigail had a mini hallucination during which she “saw” another woman (who happened to be Kate Mansi, the actress who previously portrayed Abigail) in the picture with Chad.

Abigail and Chad went downstairs to the living room, where Gwen poured Abigail some coffee and drugged it. Suddenly, Chad proclaimed that Abigail couldn’t have caffeine with her meds, and Abigail said that’s right.

Chad went to drink the coffee, and Gwen stopped him, “accidentally” spilling the coffee all over Chad. Soon, Gwen took off, and Abigail and Chad canoodled together.

In town square, Bonnie sat and cried over her coffee. Jennifer came along and gave Bonnie a napkin, which Bonnie promptly blew her nose in. Jennifer asked Bonnie what was wrong, and Bonnie lamented about kissing Justin.

Jennifer listened as Bonnie said that she had really appreciated Justin’s kindness and it made her think that she could forgive herself for what she did to Adrienne. Adrienne kept crying, and Jennifer eventually took off.

At the Brady Pub, Justin sat at the bar doing shots and drinking beer, when Jack came along and wondered what was going on. Justin said that he felt confused, foolish, pathetic, and sorry for himself.

Jack assumed Justin was upset about Kayla Brady (Mary Beth Evans), but Justin soon explained that Bonnie had kissed him. Justin denied having feelings for Bonnie, but he was upset that he betrayed Adrienne.

At Statesville, Gwen arrived to see Wilhelm Rolf (William Utay). Rolf walked into the visiting room and said that this was a surprise. “What’s up, doc?” Gwen asked.

Finally, Ben arrived back to his room at the Salem Inn, and he found the door ajar. Ben warily walked into the room, and he saw Ciara’s suitcase on the bed. “This is her bag,” Ben said, then he heard someone in the bathroom. “Ciara?” Ben called.

There’s definitely a lot going on right now on Days of Our Lives, so stay tuned! Stick with the NBC soap and don’t forget to keep CDL bookmarked for the latest Days of Our Lives spoilers, daily episode recaps, and news.