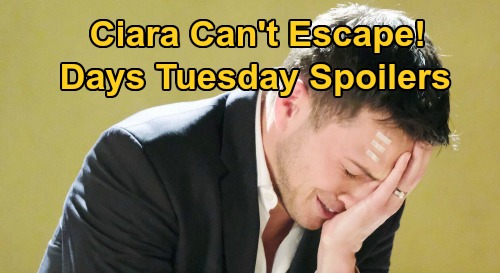 Days of Our Lives (DOOL) spoilers for Tuesday, August 25, tease that Ben Weston (Robert Scott Wilson) will be at war with his own deadly desires. Now that Vincent (Michael Teh) has given Ben the final drug dose and delivered horrific instructions, all that’s left for Ben to do is kill Ciara Weston (Victoria Konefal).

Ben will claim this is something his new shrink suggested – a way to finally get past his nightmare and move on with his life.

However, Ben will experience terrible memory flashes that leave him upset and unhinged. As Ciara sees Ben start to lose it, she’ll decide they both need to get out of there immediately.

Days of Our Lives spoilers say Ben will slam the door when Ciara tries to bolt. That’s when Ben will admit the truth: he brought Ciara there to kill her.

In the cemetery, Eve Donovan (Kassie DePaiva) will remain stunned by her unexpected visitor. Paige just showed up, so Eve will jump to the wrong conclusion about her deceased daughter.

Days spoilers say Eve will believe Paige has returned from the dead, but Paige won’t be there in the flesh. This is just a vision, but Paige will still have some guidance for her distraught mom.

While Eve listens to what Paige has to say, Rafe Hernandez (Galen Gering) and Hope Brady (Kristian Alfonso) will make a huge decision – one that affects their future together.

Since they both seemingly want a fresh start and just shared a kiss, Hope and Rafe will probably be on the same page about moving forward with a “Rope” reunion.

Unfortunately, this reunion isn’t going to pan out for long. After Hope and Rafe part ways, Rafe will return home to a shocking intruder. Eduardo Hernandez (A Martinez) will be lurking around in a hoodie, so Rafe will pull a gun before he realizes it’s his dad.

It turns out Eduardo’s out of prison and in big trouble with his enemies, so his loved ones are in grave danger.

Other Days of Our Lives spoilers say Belle Black (Martha Madison) will get some infuriating news. Nicole Brady (Arianne Zucker) will reveal what she just overheard at the hospital, so Belle will learn the details of Sami Brady’s (Alison Sweeney) confrontation with John Black (Drake Hogestyn).

Once Belle finds out all the awful things Sami said to John before his collapse, she’ll hit the roof!

When Belle meets back up with Sami, she’ll blast her sister for treating John like he wasn’t part of their family. Belle will rage over Sami’s hateful words potentially being the last ones anybody ever said to John.

DOOL fans can expect Belle to take herself off Sami’s custody case, so Sami will be on her own at the upcoming custody hearing.

We’ll pass along updates as other Days info comes in. DOOL has some exciting twists and turns ahead, so stay tuned! CDL’s your one-stop source for fantastic Days of Our Lives spoilers, updates and news, so don’t forget to stop by again soon.