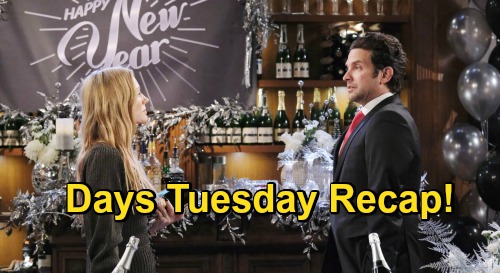 While he was there, Chloe asked Philip if he’d rent Basic Black space in Titan’s warehouses. Philip balked, but then he couldn’t say no to Chloe, so he agreed.

Chloe then offered Philip two tickets to the DiMera New Year’s Eve bash so that he could take Sarah Horton (Linsey Godfrey). Philip was disappointed that Chloe didn’t want to go with him, but Chloe said that she figured he’d want to take Sarah since he and Sarah were an item.

At the Kiriakis mansion, Sarah was busy downloading more financial data off of Philip’s laptop when Brady Black (Eric Martsolf) walked in and interrupted her.

Brady had just dropped Maggie Kiriakis (Suzanne Rogers) off at the house after a meeting, and he wondered why Sarah was working on New Year’s Eve. Sarah covered, and when Brady left, she got back to downloading files.

Later, Philip walked in, after Sarah was done with his laptop. Philip said that he had two tickets to the DiMera New Year’s Eve bash, and he asked Sarah to go with him, but Sarah refused, saying that she just wasn’t ready for another relationship and that she had plans.

Sarah thought that perhaps Philip could find someone else, and she took off.

Back at Basic Black, Brady arrived to find Chloe working, and he chided her about working on New Year’s Eve. Brady was impressed that Chloe got Philip to let them rent Titan warehouse space, and he eventually got around to asking Chloe to come to the DiMera New Year’s Eve bash with him.

“Why don’t we go together?” Brady asked.

Xander disclosed that Jack’s advice helped him get Sarah back, but then they broke up again.

At the Horton house, Abigail DiMera (Marci Miller) brought Jennifer a dress saying that she was going to come to the DiMera New Year’s Eve bash.

Abigail and Jennifer talked about Jack, and Jennifer relayed the story about how Kate was sleeping with someone whose name started with a “J” but that it wasn’t Jack. Abigail realized that Kate must be sleeping with Jake DiMera (Brandon Barash).

Abigail said that this would explain why Chad DiMera (Billy Flynn) thinks that Jake’s having an affair with her. Abigail said that she’d tell Chad tonight at the party that Jake and Kate were the ones having the affair.

Abigail left, instructing her mom to get dressed and meet her at the party. Later, Jennifer stood alone and gazed at the hourglass that Jack gave her for Christmas.

At the DiMera mansion, Kate caught Chad griping at someone on the phone, and afterwards Chad said he was in a terrible mood because Jake was trying to steal his wife.

Kate said that wasn’t true, and Chad grumped about the present that Jake had given Gwen Rizczech (Emily O’Brien) and how it was probably supposed to be for Abigail.

Kate nearly told Chad the truth about her affair with Jake, but she stopped short when Chad exploded and said that he didn’t want to hear her defend Jake. Instead, Kate tried to tell Chad that she hadn’t seen any sign of anything going on between Jake and Abigail. Chad wasn’t buying it.

Upstairs in Gwen’s bedroom, Gwen tried to make a reservation at the Salem Inn under Abigail’s name, but Jake barged in and interrupted. Jake was mad about Gwen’s bracelet stunt, and he called Gwen out on wanting Chad to think there was something going on between him and Abigail. Jake demanded the bracelet back, and Gwen refused.

“You know I bought it for Kate,” Jake fumed. “What would Chad say?” Gwen cooed, prompting Jake to get mad and manhandle Gwen for the bracelet. Finally, Gwen forked the bracelet over, and Jake left.

Gwen got back on the phone and ordered a room at the Salem Inn, complete with the romance package. There was a knock on the door, and it was Chad.

Chad wondered where Gwen’s bracelet was, and she claimed to have thrown it away. Chad didn’t fall for it, and eventually Gwen pretended to reluctantly admit that Jake took it back so he could give it to the person he bought it for.

“He bought it for Abigail,” Chad said. “I’m sorry, Chad,” Gwen said, turning around and smiling to herself.

Down in the living room, Jake and Kate talked, and Kate was pleased that Jake was wearing the tie that she got him for Christmas. Jake wanted Kate to wear the bracelet he bought for her, but Kate said that she couldn’t wear it tonight because Chad might see it.

Jake didn’t like that, but he agreed to continue to keep their relationship a secret.

At the party locale, Jake walked in to find Abigail setting up. Jake said that the place looked great, and he wondered if he could help with anything. “You can tell me the truth,” Abigail said. “Or maybe I’ll tell you the truth,” Abigail continued. “You and Kate are sleeping together.” Jake laughed nervously.

That was a terrific episode of Days of Our Lives, and there’s more action coming tomorrow, so stay tuned! We’ll be sure to keep you up to speed on all the latest Days of Our Lives spoilers, updates, and news. We’ve got you covered!