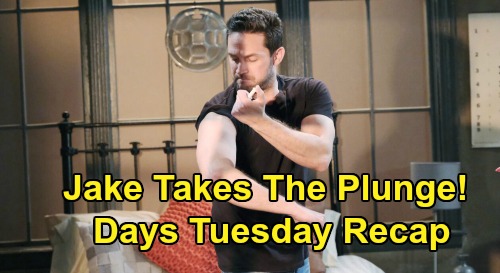 Meanwhile, at Nicole Walker (Arianne Zucker) and Eric’s apartment, Nicole and Allie Horton (Lindsay Arnold) welcomed Marlena Evans (Deidre Hall) and Holly Jonas (Elin Alexander) back from getting Holly a manicure ahead of the wedding.

Marlena and Nicole spoke privately, and Nicole admitted she was nervous about the wedding. Marlena said that it was clear that Nicole made Eric very happy.

At the Salem PD, Vivian Alamain (Louise Sorel) sat in the interrogation room awaiting her arraignment. Kate Roberts (Lauren Koslow) arrived and announced that she got the memory serum from Wilhelm Rolf (William Utay).

Kate whipped out three syringes from her purse, and Vivian said that they needed to test the serum on a guinea pig. Vivian then jabbed one of the syringes into Kate’s arm.

Kate messed with Vivian, pretending to hallucinate, then for real Kate said that she remembered where she had put her favorite pen that had gone missing. Kate and Vivian deduced that the serum must be real, and Vivian was thrilled because now Jake Lambert (Brandon Barash) would get his memory back and be Stefan DiMera (Brandon Barash) again. Kate took off with the remaining two syringes to go give them to Jake.

Later, Vivian was alone when someone came in the interrogation room. Vivian looked up and gazed at the person, then said, “Oh, thank God you’re here!”

At Julie’s Place, Gwen (Emily O’Brien) sat with Chad DiMera (Billy Flynn) polishing off what appeared to be her fourth Bloody Mary. Gabi DiMera (Camila Banus) walked in and bickered with drunk Gwen.

Gwen needled Gabi about having slept with Jake, and Gabi said that Jake had promised not to sleep with Gwen again until he got his memory back. Gwen snagged a celery stalk and left, upset.

Gabi then needled Chad about having a thing for Gwen, which Chad totally denied. Chad accused Gabi of still being jealous of him and Abigail DiMera (Kate Mansi).

Gabi sat down and drank a shot, explaining to Chad that she was going to get Jake to get the serum from Rolf, and that Jake would soon become Stefan again. Chad mused that Jake has probably researched Stefan and realized what a horrible human being he was.

Over at Jake’s apartment, Jake looked up Stefan online, and he was dismayed to see an old article titled, “Was It Rape?” detailing how Abigail’s encounter with Stefan wasn’t consensual. “Woah,” Jake said to himself, as he gulped a beer.

Gwen then showed up, peeved after her talk with Gabi. Gwen tried to seduce Jake, but he refused, saying that he wanted to take a break and he was too weirded out about Stefan having a nonconsensual encounter with Abigail.

Gwen took off upset, bumping into Gabi on her way out. Gabi floated her idea of getting Jake to go see Rolf, but then Kate showed up and presented the syringes to Jake and Gabi. Gabi was thrilled.

Kate left, and Gabi bickered with Jake about whether he was going to take the serum. Jake initially refused, but then in a sudden fit, he took one of the syringes and jabbed himself with it. Gabi was shocked.

Gwen headed back to Julie’s Place where she found Chad. Gwen was nearly falling over drunk, so Chad said they should go. “Where are you taking me?” Gwen said. “I promise, I’ll be a perfect gentlemen,” Chad said. Gwen and Chad left.

Abe hugged Nicole, saying that Fay Walker (Valerie Wildman) would be proud of her if she was here today. Nicole was touched. John and Roman each hugged Nicole, and Nicole thanked John, Marlena, and Roman for raising Eric to be the wonderful person that he is.

Soon, Nicole and the rest of the women went to another room, while Eric are out and joined Roman and John. Roman and Eric hugged, and Roman asked if Eric was ready. Eric said he was born ready.

The wedding started, with Holly as flower girl and Marlena and Allie as bridesmaids. Abe officiated, saying some beautiful words about how the Brady Pub was a special place, and he referenced Shawn Brady (Frank Parker) and Caroline.

Eric said some personal words, saying that he has known Nicole over 20 years and that he’s realized that he can’t live without her. Eric talked about Holly and wanting to raise her with Nicole, and he thanked Nicole for being his family and his wife.

Nicole spoke, too, thanking Eric for forgiving her in the past and saying that they’ll get through whatever the future holds. Then came the traditional vows and the rings, with Eric and Nicole nearly in tears of happiness.

Finally, Abe pronounced Eric and Nicole to be husband and wife, and everyone applauded. Abe introduced everyone to Mr. and Mrs. Eric and Nicole Brady. Happiness ensued, until someone suddenly said, “My deepest condolences.” Everyone looked in the direction of the voice, and it was Sami Brady (Alison Sweeney) standing in the doorway of the pub!

That was a terrific episode of Days of Our Lives, and tomorrow should be exciting too, so stay tuned! Stick with CDL for all the latest DOOL spoilers, news, and daily recaps. We’ve got you covered!