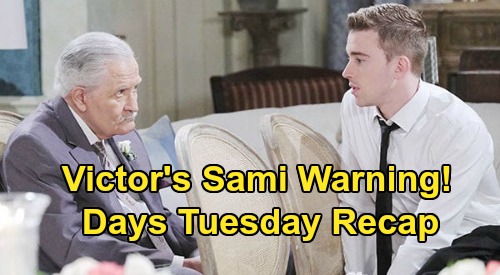 Days of Our Lives (DOOL) spoilers recap for Tuesday, July 7, reveal that Steve Johnson (Stephen Nichols) and Jack Deveraux (Matthew Ashford) sat outside the Brady Pub. Jack asked his brother whether he could live with Kayla Brady (Mary Beth Evans) marrying Justin Kiriakis (Wally Kurth), and Steve wasn’t sure about that at all. After some reminiscing about Adrienne Kiriakis (Judi Evans), Steve took off, saying he wasn’t going to mess up this day for Kayla.

Meanwhile, at Kayla’s condo, Kayla reminisced about her first wedding to Steve. The phone rang, and it was Joey Johnson (James Lastovic) calling from prison to wish Kayla well on her wedding day. Kayla got choked up talking to Joey, as she told him that it meant the world to her that he was happy for her and Justin.

In the park, Jennifer Deveraux (Melissa Reeves) and Hope Brady (Kristian Alfonso) continued to talk about how Kayla didn’t know that Steve still loved her and wanted her back.

Jennifer left, and Justin appeared, having overheard the whole thing. Justin quizzed Hope, and Hope was honest with Justin, saying that Steve wanted Kayla back but was choosing not to tell her so that she could be happy with Justin.

Justin reeled, saying that he just talked to Steve, and that Steve had wished him well on his wedding to Kayla. Hope revealed that Steve wasn’t planning on acting on his feelings, but that he was about to tell Kayla the truth when Justin proposed to her.

Justin looked completely gutted about this. Hope left, and Justin thought for a moment, then left the park.

At the Kiriakis mansion, Will Horton (Chandler Massey), Victor Kiriakis (John Aniston), and Sonny Kiriakis (Freddie Smith) chatted. Victor stated that Justin deserved to be happy, and that Kayla was better off without “the one-eyed wonder.”

Sonny mentioned Allie Horton (Lindsay Arnold) to Will, and Victor piped up, wondering if they were talking about Will’s sister. Will and Sonny confirmed, and then they mentioned the adoption situation.

Victor immediately crabbed about how Will and Sonny should stay out of Sami Brady’s (Alison Sweeney) grasp. “You adopt the kid, and she’ll suck you right back in,” Victor said. “She’ll make your life a living hell.”

Sonny got outraged and started fussing at Victor, but Will intervened, saying that they needed to stay positive for Justin and Kayla’s wedding.

Will left the room and Justin came in, saying that he had visited Adrienne’s grave. After some ruminating about weddings and life, Justin, Victor, and Sonny shared a warm moment and a toast over the wedding.

Back at Kayla’s condo, Jennifer walked in to find Kayla in tears, having just hung up with Joey. Jennifer gave Kayla a blue topaz bracelet, which was something old, borrowed, and blue, and it had been given to Jennifer by Adrienne when Abigail DiMera (Kate Mansi) was born. Jennifer said that the blue stones represented love, friendship, honesty, loyalty, and clarity of feelings.

Hope showed up, followed shortly by Steve. Kate fussed at Steve for not wearing a suit, then Hope rushed over to Steve and told him that Justin had overheard her and Jennifer talking in the park. Steve was horrified.

The ceremony got underway, and while Abe was introducing Steve, Steve daydreamed about the day of his first wedding to Kayla. After the ceremony, Abe and Kate talked, and Abe was utterly amazed that the ceremony was getting hundreds of thousands of hits on social media. Kate was thrilled, and Abe thanked her for all her hard work.

Hope, Steve, Marlena, and John went to the Brady Pub together, and John told stories about his adventures with Steve, but Steve was distracted over his chowder. Steve moped while everyone tried to convince him to go tell Kayla how he feels.

Steve said that he wanted to go help Shane Donovan (Charles Shaughnessy) overseas with a case – something that would take him out of Salem indefinitely.

Back at the Kiriakis mansion, Kayla was ready to enter the living room and walk down the aisle, when her heel broke. Jennifer rushed up to her, and while they were trying to figure out what to do, Jack came out to see what the holdup was.

Jennifer told Jack to go in and stall, so Jack went in the living room and recited some tragic poem that seemed totally inappropriate but did kill some time. Soon, Kayla was ready, and she walked barefooted into the room, with no one the wiser.

Kayla walked up the aisle smiling at Justin, and Justin smiled back but was clearly conflicted. Will started the ceremony, sailing through the objections without any issue. But suddenly, Justin said, “Wait!” Everyone looked aghast, as Justin said that there was something he needed to say.

That was a great episode of Days of Our Lives, and you won’t want to miss tomorrow’s episode, so be sure to stay tuned. Here at CDL, we’ve got all your soap news and updates, as well as your daily Days of Our Lives recaps. We’ve got you covered!