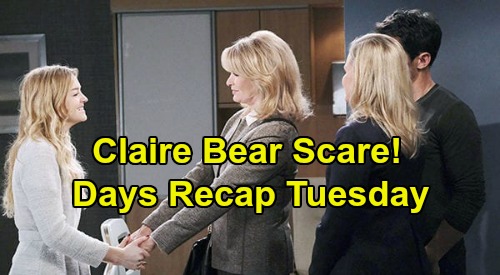 Days of Our Lives (DOOL) spoilers recap for Tuesday, June 9, reveal that Claire Brady (Olivia Rose Keegan) told her parents that there’s no way she’s going to Hong Kong with them once she’s released from Bayview. Belle Black (Martha Madison) and Shawn Brady (Brandon Beemer) told Claire that her release required supervision by a legal guardian, which upset Claire. Claire then insisted that her parents move back to Salem.

When Belle and Shawn refused to do that, Claire insisted that Salem was her home and that she needed to be there to make amends to Ciara Brady (Victoria Konefal) and to Ben Weston (Robert Scott Wilson).

Shawn then accidentally let it slip that Ciara and Ben were engaged, and Claire pretended to learn about the engagement for the first time. Claire said she was super happy for the couple.

Claire went on, trying to persuade her parents to let her stay in Salem, then she got the bright idea that she could stay with her Grandma Marlena Evans (Deidre Hall). Shawn and Belle reluctantly decided that they’d talk things over with Marlena and see what she thought about that arrangement. Claire was thrilled.

In town square, Hope Brady (Kristian Alfonso) was talking with Ciara when Rafe Hernandez (Galen Gering) came along. Hope asked if there was any news from the judge in David Ridgeway’s (Kyler Ends) custody case, and Rafe said he was waiting on Justin Kiriakis (Wally Kurth) to call with an update.

Rafe told Ciara that Hope had testified for him at the hearing and that she had done a stellar job against Zoey Burge’s (Alyshia Ochse) questioning.

Rafe then asked if either Ciara or Hope had seen Gabi DiMera (Camila Banus). Turns out, Rafe had a breakfast meeting with Gabi and she didn’t show. Rafe said that it was the day before Gabi’s court date, and he hoped to talk with her about her case.

Ciara nearly told Rafe about Gabi’s kidnapping, but she thought better of it and left.

Hope and Rafe talked about Claire’s release from Bayview for a bit, then Rafe asked Hope if she thought it was possible that Wilhelm Rolf (William Utay) had set up Gabi.

Hope said that where Rolf was concerned, anything was possible, and that he could have had one of his minions drug Abigail DiMera (Kate Mansi) while he was in jail. Rafe decided to go question Rolf, then he got a call from Justin saying the judge had a decision in the custody case.

At Jake Lambert’s (Brandon Barash) garage, Will Horton (Chandler Massey) and Sonny Kiriakis (Freddie Smith) quizzed Ben and Jake about Gabi’s disappearance. Ben and Jake tried to busy themselves fixing a car, but “WilSon” kept firing questions at them.

Neither Ben nor Jake admitted to knowing where Gabi was. Will and Sonny eventually left, and Ciara appeared, angry over Jake not wanting to get the cops involved.

Jake and Ciara argued, and Jake insisted that their best shot at this point was to find Gwen (Emily O’Brien). Ben decided to give Gwen a couple hours to call Jake back, and then they were going to go tell Rafe what was going on. Jake looked displeased.

Outside the Brady Pub, Will and Sonny talked about Gabi, and they concluded that there’s no way Gabi would willingly disappear and leave Ari Horton (Sydney Brower) behind, nor would she leave when she truly believes Stefan DiMera (Brandon Barash) is alive.

Will said he got vibes from Jake and Ben, and that he suspects they both know something about Gabi that they’re not telling.

Marlena balked at first, wondering if Nicole really wanted to go there, but Nicole said that she did. Marlena agreed to do whatever she could to get Sami there.

Marlena, Belle, and Shawn then went to Bayview where Claire was gazing at Ciara and Ben’s “save the date” card. Claire quickly hid the card under her pillow, and Marlena soon shared that Claire would be able to come home…with her. Claire was thrilled, while Belle and Shawn looked a bit worried still.

At Eric and Nicole’s apartment, Abe Carver (James Reynolds) talked with Eric. Eric wanted Abe to marry him and Nicole the moment Nicole came home. Abe questioned whether that’s really what Eric wanted, and it was.

Nicole arrived home from Marlena’s, and Eric sprung the idea of an impromptu marriage ceremony on her. Nicole said that it wasn’t happening, and that she wanted to wait.

Abe left to give the couple some privacy, and Nicole told Eric the she wanted his family to be at their wedding…including Sami. Eric wasn’t sure that was such a great idea, but Nicole insisted, saying that his twin sister should be there.

As Eric and Nicole were talking, there was a knock at the door, and Eric answered. Eric’s eyes got huge, and Nicole was stunned as they gazed at the person who was standing at the door. “Oh my God,” Eric said.

At the DiMera mansion, Kate DiMera (Lauren Koslow) barged in and tried to strong-arm Jack Deveraux (Matthew Ashford) and Jennifer Deveraux (Melissa Reeves) into persuading Hope and Steve Johnson (Stephen Nichols) to agree to receive a key to the city in a special ceremony with Abe.

Kate came on strong, but Jack and Jennifer refused to pressure Steve and Hope, saying that they’re adults and can make their own decision.

Kate wasn’t happy about this, and she tried to make a case for how it would be good for Steve and Hope to participate in the ceremony. Jack and Jennifer agreed to cover the event for the Spectator assuming Steve and Hope say yes, but they flatly refused to pressure their friends into doing something they didn’t want to do. Kate left in a huff.

Finally, at the police station, Will and Sonny encountered Abe and wondered if he had seen Rafe. Abe thought that Rafe was likely at the courthouse for David’s custody hearing, and he asked Will and Sonny what was wrong. “Gabi is missing, and we think she could be in trouble,” Will and Sonny told Abe.

That was a great episode of Days of Our Lives, and there’s plenty more in store this week, so stay tuned! We’ll give you further updates as more DOOL news comes in. Stick with the NBC soap and keep CDL bookmarked for the latest Days of Our Lives spoilers, daily recaps, and news.