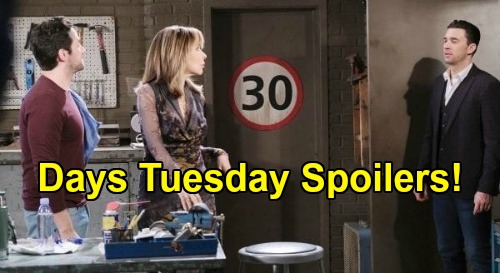 Days of Our Lives (DOOL) spoilers recap for Tuesday, October 13, reveal that Chad DiMera (Billy Flynn) showed up in Jake Lambert’s (Brandon Barash) workshop to give Jake a break.

Chad said that he had been taking stuff out on Jake that wasn’t his fault, and Jake said that he knew from Kate DiMera (Lauren Koslow) about how Stefan DiMera (Brandon Barash) slept with Abigail DiMera (Marci Miller). Chad then offered Jake a role in the family business.

Jake interrupted, suggesting that he and Chad become Co-CEOs, but Chad scoffed, saying that Jake could enter the executive training program. That upset Jake, and Jake and Chad proceeded to get into a shouting match, with Jake getting right up in Chad’s face.

Kate caught up to Chad at Julie’s Place, and Chad blasted Kate for telling Jake about what Stefan did. Chad said that Jake really bothered him, and that he couldn’t get along with him. Kate warned that Jake wasn’t going away anytime soon.

In the DiMera mansion, Gwen Rizczech (Emily O’Brien) and Abigail talked about throwing a party to celebrate the anniversary of Jennifer Deveraux (Melissa Reeves) waking up from her coma.

Gwen offered to help Abigail plan the event, and ultimately Abigail agreed. Gwen and Abigail seemed to be becoming closer with each other, and they even dissed Gabi DiMera (Camila Banus) a little, as Gwen remembered having been the one who put the harmful drug into Abigail’s champagne all those weeks ago.

Later, Gwen spoke to Stefano DiMera’s (Joseph Mascolo) portrait, saying that the night of the big party will be a night that everyone will remember. Gwen walked away, as Jake walked in, having overheard Gwen’s words.

They all talked at length about Kristen DiMera’s (Stacy Haiduk) upcoming hearing, and Brady got a call from Marlena Evans (Deidre Hall) saying that she couldn’t watch Rachel Black during the trial. Jack and Jennifer offered to watch Rachel, and Brady agreed.

Later, Jack and Jen babysat Rachel in the square. Jennifer remarked about how Abigail used to act when she was a baby, and Jack lamented that he wasn’t there then, and that he regretted having left Jennifer and Abigail at that time.

Soon, Abigail came along and told her mom and dad about the party that she and Gwen were going to throw to commemorate Jennifer waking up from the coma.

At the police station, Lani Price-Grant (Sal Stowers) arrived to see Melinda Trask (Tina Huang). Lani sat down and appealed to Melinda as a mother, pointing out that both she and Melinda know what Kristen was going through at the time she accidentally pushed Haley Chen (Thia Megia) down the stairs.

Lani talked about her own son, David Abraham, and about his loss. Melinda was clearly affected by this, and she recounted how she had to hand over Haley at birth.

Lani told Melinda that if she sent Kristen to prison, she was going to separate a mother from her child, and she started to get through to Melinda. Melinda ended up crying, and Lani cried too, telling Melinda that it wasn’t too late to drop the charges.

Melinda and Lani were embracing and crying together when Brady walked in and wondered what on earth was going on.

At the Salem Inn, Eli Grant (Lamon Archey) told Kristen that he had a recording of her confession, and that Melinda found out that Lani had helped Kristen flee. Eli explained that Lani was going to prison unless he turned the confession over to Melinda…unless Kristen did the right thing and confessed.

Eli said that it was the only way to preserve his marriage to Lani, but Kristen balked.

Kristen said that she’d just leave town, but Eli said that Lani would still go down. Eli appealed to Kristen, even offering to get on his knees and beg.

Kristen wouldn’t let Eli do that, and she eventually relented and said that she couldn’t let Lani suffer, and that she’d confess.

Eli left Kristen’s room and went to the park, where he deleted her confession from his phone.

Back at the police station, Lani told Brady that there was something that Melinda wanted to tell him. Just then, Kristen barged in the room and blurted out that she wanted to confess to the attempted murder of Victor Kiriakis (John Aniston). Brady and Lani were horrified.

There’s definitely a lot going on right now on Days of Our Lives, so stay tuned! Remember, CDL is your go-to place for all the latest Days of Our Lives spoilers, updates, and news. We’ve got you covered!