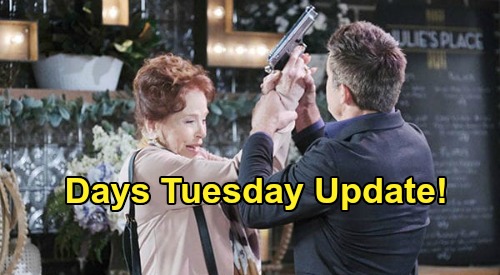 Days of Our Lives (DOOL) spoilers update for Tuesday, June 30, teases that Brady Black’s (Eric Martsolf) emotions will lead to an inner battle. Kristen DiMera’s (Stacy Haiduk) latest return will leave Brady confused, overjoyed, panicked and furious! Brady will feel everything all at once since Kristen’s showing up out of the blue and putting her freedom at risk.

Kristen will tell Brady the reason for her return trip to Salem. DOOL fans know Kristen wanted to come wish Lani Price (Sal Stowers) well before her big day. Although Brady should understand that on some level, he’s still going to object.

Brady will be grateful for this brief time with Kristen, but he’ll also worry she could get arrested at any moment.

Days of Our Lives spoilers say Kristen won’t be as fearful. She’ll probably suggest she’s been careful so far and hasn’t seen any signs of the cops. Kristen will even want to do some partying with Brady, so she might offer to accompany him back to his room at the Salem Inn. Of course, Kristen’s idea of a party would be hitting the sheets and just enjoying each other.

Days of Our Lives spoilers say Brady and Kristen will bicker comically, but things will ultimately take a steamy turn. Kristen and Brady will lock lips as they prepare to say goodbye once again.

However, Brady’s about to make an impulsive choice that’ll change both their lives. Brady won’t think he can handle the distance again, so he’ll insist on running away with Kristen.

That’ll mean Brady won’t get to see Tate Black (Colin and Kyle Schroeder), but it’s not like Brady sees his son much anyway. This is Brady’s opportunity to have a solid family unit with Kristen and Rachel DiMera Black, so Brady will refuse to let it pass him by. Kristen will be excited about this new chapter as she prepares to sneak out of town with Brady.

Other Days of Our Lives spoilers say Hope Brady (Kristian Alfonso) will get updates on Gabi Hernandez DiMera’s (Camila Banus) “not guilty” verdict. Hope will be happy for Rafe Hernandez (Galen Gering), who was desperately hoping his sister would get off the hook.

Rafe’s life has been pretty empty ever since Zoey Burge (Alyshia Ochse) took David Ridgeway (Kyler Ends) away from him. If Gabi had been sent to prison, that would’ve piled on the pain.

Hope will be glad it all worked out as she shares a pizza with Rafe. There’ll also be some hand touching, which could be another sign that these two will reconnect as a couple eventually.

In the meantime, Gabi and Chad DiMera (Billy Flynn) will spar over the court outcome. Chad will fume over Gabi getting off scot-free, but Gabi will think justice was served. DOOL viewers know Gabi’s innocent just this once, so maybe we shouldn’t hold her gloating against her!

Alas, Gabi just tried can’t help herself when it comes to raining on Lani and Eli Grant’s (Lamon Archey) parade. Gabi will head over to Julie’s Place to cause a scene, but let’s talk about Tamara Price’s (Marilyn McCoo) fainting spell first. Tamara just passed out, so Lani will make sure her mom’s all right on Tuesday.

Eli and Valerie Grant (Vanessa Williams) will pitch in, but Tamara will come to and insist this wedding’s still happening. Although Tamara will return to her hotel room, she’ll think Lani and Eli should go ahead without her.

That’ll be difficult for Lani, who really wanted her mother to watch her tie the knot. Nevertheless, Lani will agree to get married and fill Tamara in on the ceremony later.

Gabi will come bopping in next, so Lani will immediately lash out at her rival. Julie Williams (Susan Seaforth Hayes) will also fly into a rage, so Gabi will be forced out the door.

Back with Gabi, she’ll arrive the hospital and meet up with Jake Lambert (Brandon Barash). Gabi will spar with Jake as usual, but there’ll be another kiss thrown in the mix. Days spoilers say the moment of truth is coming up later this week. It won’t be long until Gabi opens up the DNA results and reveals a shocker!

As other news comes in, we’ll keep you posted. DOOL fans won’t want to miss all the Salem surprises, so stay tuned. CDL’s the place to be for scorching Days of Our Lives spoilers, updates and news, so check back frequently.