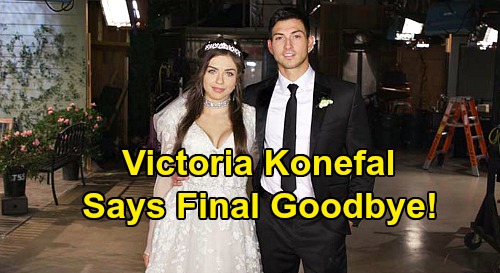 Days of Our Lives (DOOL) spoilers has some news to pass on about Victoria Konefal, who portrays Ciara Brady on the NBC soap and is one-half of “Cin” along with Robert Scott Wilson (Ben Weston). Victoria, who has been playing Ciara on DOOL since 2017, has confirmed her departure from the show.

As you’re probably well-aware, DOOL has been on hiatus from filming due to the coronavirus pandemic, and now we know that Victoria won’t be returning as Ciara when filming resumes on September 1st.

Victoria made her statement to Deadline, saying: “I cherish every moment I have spent working on Days of Our Lives. It is an honor and a privilege to work in an environment filled with so much talent and passion in every direction. The experience and knowledge I’ve accumulated over the past three years is irreplaceable, and I’m forever grateful for it. I would love the opportunity to continue working with my castmates in the future, but at this time I will not be returning as a full-time cast member.”

Victoria’s statement continued: “To the cast and crew, it was an absolute pleasure working with you. To the loving and unwaveringly supportive fans, thank you. Thank you for joining me on my journey of finding Ciara Brady. It was a beautiful one. Cheers to some of the best days of my life.”

Of course, there are scores of fans out there who are wondering exactly what will happen with the character of Ciara now. As you might know, DOOL has historically filmed months in advance, which means that episodes through October are already filmed. As CDL first reported, Victoria has filmed her last episodes as a full-time cast member, so one wonders how the show will handle her departure.

There are, of course, various options here. The role could be recast with another actress, or Ciara could be written out in some way, with the possibility of Victoria returning as Ciara for brief stints, much like Alison Sweeney appears from time to time as Sami Brady without being a full-time cast member.

Right now, it all seems up in the air, and we’ll be sure to let you know how things develop as we hear more.

At any rate, Victoria Konefal is out as Ciara Brady, and she’ll be missed by “Cin” fans for sure. Do you think that the role of Ciara will be recast once Victoria leaves?

Stick with the NBC soap and be sure to keep CDL bookmarked so you don’t miss any of the latest Days of Our Lives spoilers, updates, and news. And check out our daily DOOL recaps, too!