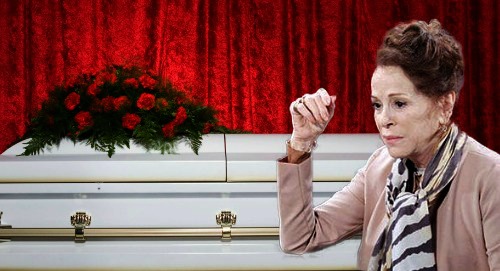 Days of Our Lives (DOOL) spoilers tease that a long-awaited funeral is finally set to hit the screen. DOOL fans have probably heard by now about the show’s “Four Weddings and a Funeral” theme. There’s been plenty of talk about all the couples getting married, but who’s dying? That’s been the big mystery – and it remains a bit of one.

However, there are some new clues to consider in Days of Our Lives spoilers. On July 20, Gabi Hernandez DiMera (Camila Banus) will give Jake Lambert (Brandon Barash) some tragic updates. That same day, a surprising funeral will bring complicated emotions.

Of course, there’s no guarantee those Days spoilers are related, but they seem to be. It sounds like Gabi will tell Jake that someone died and then there’ll be a funeral for this person.

The only deaths that might bring complex emotions for Jake would be Gwen (Emily O’Brien) or Vivian Alamain (Louise Sorel) – and we know Gwen was still on set before production was suspended.

That leaves Vivian, who would certainly benefit from a faked death right about now. Vivian is facing a pile of charges she can’t get off the hook for – and her loyal manservant, Ivan Marais (Ivan G’Vera), will soon be right by her side. Ivan has schemed for Vivian many times in the past.

Days spoilers say Ivan will reveal that Jake and Stefan DiMera (Brandon Barash) are twins during the week of July 13-17. Will Ivan also help Vivian fake her death? DOOL insiders insist this funeral isn’t a massive loss. Everything we’re hearing suggests it won’t be some shattering thing for viewers.

There are a lot of Vivian fans who’d be upset if she were actually killed off, but a faked death is fine. Naturally, we should note that any funeral Vivian got would be tiny! Not many people in Salem would care, so it might just be Jake wishing he could’ve known his mother while Gabi supports him.

That moment of connection could be why Jake asks Gabi to be his date for Ben Weston (Robert Scott Wilson) and Ciara Brady’s (Victoria Konefal) wedding. If that’s how this Days storyline plays out, it’ll be interesting to see how Ivan and Vivian pull off their plan! As other news pops up, we’ll fill you in.