Days of Our Lives Spoilers: Wednesday, June 3 Recap – Claire Wants To Attend Ciara’s Wedding – Jake’s Got 24 Hours To Save Gabi 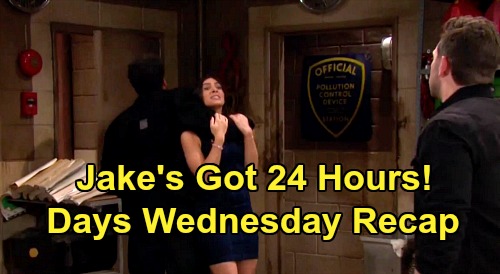 Days of Our Lives (DOOL) spoilers recap for Wednesday, June 3, reveal that Claire Brady (Olivia Rose Keegan) begged Marlena Evans (Deidre Hall) to help her to come home from Bayview. Marlena was hesitant, but Claire insisted that Marlena could say the right thing to the right people and get her released. Marlena thought this all seemed a little rushed and desperate, and she wanted to know what’s happened to make Claire want to be released right away,

Claire argued that it wasn’t sudden at all, since she’s been locked up for two years. Claire noted that she had made a lot of progress, and that she’s been the perfect patient.

Plus, Claire argued that Ben Weston (Robert Scott Wilson) had been released from Bayview, so why shouldn’t she? Marlena said that Claire couldn’t compare her situation to Ben’s.

Claire then told her grandmother that she wanted to make amends for what she had done to Ciara Brady (Victoria Konefal), and she noted that Ciara hadn’t visited her once in the past two years.

Marlena eventually agreed to talk with Claire’s doctors to see what they thought. Claire was overjoyed, and after Marlena left, she pulled out Ciara and Ben’s “save the date” card, saying that maybe she’d make it home for the wedding.

At the Salem Inn, Ben thanked Jake Lambert (Brandon Barash) for telling him the truth about his mob ties. Jake wanted Ben to return to work, but Ben balked, saying those guys would be back and that he didn’t want anything happening to Ciara. Jake lamented about how his ex, Gwen (Emily O’Brien), has the thing he owes the mob guys.

Ben offered to help find Gwen, saying that he has special sills that could help in that regard. Jake thanked Ben, and Ben said he’d get started right after he dropped in on Ciara over at Titan Industries.

In Jake’s room at the garage, the burly mob guy prevented Gabi DiMera (Camila Banus) from leaving, and he demanded to know what Gabi had stashed in her bag. The guy grabbed Gabi’s purse and found the toothbrush, scoffing as he did.

The guy demanded to know where Gabi’s boyfriend was, and Gabi said that Jake was her husband. The guy liked the sound of that, and he decided that Gabi would make a good hostage.

Gabi protested and tried to explain about Jake possibly being Stefan DiMera (Brandon Barash) but the guy didn’t want to hear about it. The guy demanded that Gabi call Jake, handing her his phone.

At Titan in the CEO office, Brady Black (Eric Martsolf) threw Ciara’s business proposal in the trash, then got a message saying that Maggie Kiriakis (Suzanne Rogers) was freed.

Nicole Walker (Arianne Zucker) walked in, all upset because Brady left Basic Black to return to the Titan CEO position. Nicole blasted Brady because she heard the news from a janitor. Brady tried to apologize, and he alluded to “a plan,” but he wouldn’t elaborate.

That left Nicole frustrated, and she quizzed Brady about making moves on Sarah Horton (Linsey Godfrey). Brady brushed off Nicole’s concerns, saying that he just needed a fresh start.

Nicole found this all to be very odd, and she continued to question Brady about why he’d go back to work for Victor Kiriakis (John Aniston), but Brady wouldn’t discuss it, and he left in a rush, leaving Nicole behind.

At the Kiriakis mansion, Sarah and Xander Kiriakis (Paul Telfer) faced off at the door. Sarah didn’t want to talk with Xander, as she was there to see Maggie. Sarah burst into the living room, but Maggie and Victor had stepped out of the room.

That left Xander and Sarah in the living room alone. Xander tried to talk with Sarah and tell her how sorry he was and that he loved her, and he seemed to be getting to Sarah a little.

But then Brady walked in and Xander told him to leave. Brady refused, and Xander turned to Sarah, saying that he had made mistakes, but everything was out in the open. “Everything?” Brady mused. “Hey…are you also sorry about trying to take her baby away before it was even born?” Sarah reeled, and asked what Brady was talking about.

After some back and forth, with Xander trying to prevent the truth from coming out, Brady blurted out that Xander was going to have Sarah’s embryo stolen out of her body and implanted into Kristen DiMera’s (Stacy Haiduk) womb. Sarah exploded at Xander.

They argued, and Xander said, “You were going to have an abortion, it’s not like you actually wanted the baby.” In response to that, Sarah slapped Xander silly.

Sarah fumed, telling Xander that his words were meaningless and all that mattered were his actions. “You and I are done,” Sarah yelled. Brady and Sarah then left, with Xander looking totally defeated.

At the Brady Pub, Ciara grabbed some coffee to go for herself and Brady, and she ran into Eric Brady (Greg Vaughan). Ciara learned about Eric and Nicole’s wedding, and the two shared congratulations with each other.

Through their conversation, Ciara expressed her concern about Brady, who she thought was off his game and wasn’t listening to her ideas about Titan. Eric took note of that.

Ciara then returned to the CEO office with coffee for Brady, but Brady wasn’t there. Ciara noticed her proposal in the trash and got miffed. Ben then walked in with flowers for Ciara and learned about the proposal being in the trash.

Ben encouraged Ciara, saying that Brady was probably just threatened by her ideas. Off-screen, Ben told Ciara about looking for Gwen, and Ciara cautioned him since they have a wedding to plan.

At Nicole and Eric’s apartment, Nicole walked in to find Eric there. She mentioned to Eric about how strange Brady was acting, and Eric said that Ciara said basically the same thing, Eric told Nicole that she would do great running Basic black on her own.

Nicole then noticed Ben and Ciara’s “save the date” card on the table, and she got downcast when she realized that their wedding was in July.

Nicole surmised that she and Eric could marry in August or September, but Eric said he wanted to get married before then, and that he didn’t need a big wedding – he just needed her. Nicole and Eric kissed happily.

Back at Jake’s garage, Jake walked in the place to get to work, when Gabi and the burly mob guy came out from the back room, with the guy holding Gabi at gunpoint. Jake reeled and told the guy to let Gabi go. The guy told Jake to give “it” back, and then he’d let Gabi go.

Gabi pleaded with the guy, saying that she had a daughter at home, but the guy didn’t care. He told Jake that he had 24 hours to return “it” or else his little wife dies. The guy then dragged Gabi out of the place, while Jake watched in frustration.

There’s definitely a lot going on right now on Days of Our Lives, so stay tuned! We’ll give you updates as DOOL news comes in. Stick with the NBC soap and be sure to read CDL frequently for all your Days of Our Lives spoilers, updates, and daily recaps.