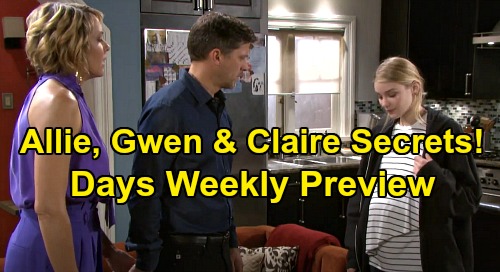 Days of Our Lives (DOOL) spoilers preview tease that the action is going to heat up on two major storyline fronts on the NBC soap. The new DOOL preview for the week of June 8th is all about two young ladies who will be returning to Salem, and the far-reaching consequences of their arrivals. It looks like it’s going to be a great week, so let’s get right into it!

First off, the new DOOL preview promo features Claire Brady (Olivia Rose Keegan), who is heard saying, “I’m a different person now.” That’s the tune that Claire is singing these days, but should her Grandma Marlena Evans (Deidre Hall) believe her?

Claire seems to be pretty fixated on Ciara Brady (Victoria Konefal) and Ben Weston’s (Robert Scott Wilson) wedding, but she insists that her reasons for wanting to see Ciara again are pure.

Well, according to Days of Our Lives spoilers, Claire will indeed get released from Bayview thanks to Marlena, and the promo shows Shawn Brady (Brandon Beemer) and Belle Black (Martha Madison) emotionally telling Claire that she’s coming home.

The promo also shows Claire staring at Ciara and Ben’s “save the date” card, which she stole from one of Ben’s old therapists at Bayview. Claire rushes to hide the card as Shawn enters the room.

Clearly, Claire doesn’t want her family to know that she’s hoping to attend Ben and Ciara’s wedding – she just wants them to think it’s a happen-so that she’s wanting to be released now.

In fact, Shawn and Belle will want Claire to come back to Hong Kong with them, but Claire is going to put the kibosh on that plan pretty quickly, as she’ll convince everyone to let her stay with Marlena and John Black (Drake Hogestyn).

But it looks like Claire is going to leave Bayview with a secret that only her friend on the inside – Gwen (Emily O’Brien) is going to know. The promo shows Claire and Gwen sealing their secret with a pinky swear, as Claire says, “You keep my secret and I’ll keep yours.” Of course, this indicates not only that Claire has something to hide, but so does Gwen.

As DOOL viewers know, Gwen might just have possession of a certain something that the mob guys who are after Jake Lambert (Brandon Barash) want back, so that could be Gwen’s secret that Claire is referring to.

We’ll see what happens here, but something tells us that whatever Claire’s secret is could come back to bite once mischievous Gwen gets released from Bayview.

Next, the Days of Our Lives preview promo turns to the situation with another character who will be returning to Salem during the week of June 8th, and that’s Allie Horton (Lindsay Arnold).

As shown in the promo, Allie unzips her hoodie to reveal her pregnant belly to Eric and Nicole Walker (Arianne Zucker), and from the looks of it, she’ll be due to give birth sometime very soon. Eric and Nicole look stunned, and Eric has a particularly pained expression when Allie says, “Promise not to tell my mother.”

Of course, that’s an impossible promise to ask, but it looks like Eric and Nicole might respect Allie’s wishes and keep her secret for the time being. Ongoing DOOL spoilers say that Allie will give birth sometime this summer and that Nicole will be in the delivery room as her coach, and that will surely cause some bad feelings between Sami and Nicole.

At any rate, the promo ends as someone knocks on the door as Allie is standing in Eric and Nicole’s living room. Chances are, Allie might slip into the back room while whoever is at the door come in. We’ll see what happens there, but one thing’s for sure – eventually Sami and Lucas are going to find out about Allie’s pregnancy.

It looks like we’re in for an exciting week on the NBC soap, so stay tuned! As always, we’ll give you updates as more DOOL news comes in. Remember, CDL is here for you with all the latest Days of Our Lives spoilers, updates, and news.