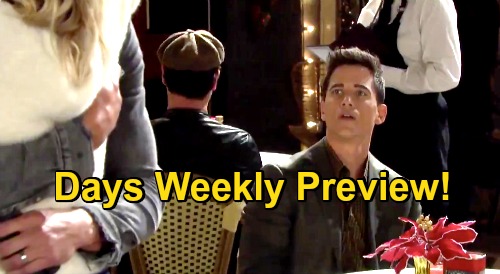 First off, Charlie Dale (Mike C. Manning) and Claire Brady (Isabel Durant) will continue to get to know each other. Charlie and Claire make a cute couple, but soon something will happen to give Charlie pause…again.

As DOOL viewers know, Charlie has already encountered Claire kissing one of her exes, and that really threw him for a loop. Well, now that’s behind Claire and Charlie, but someone else will come along and get some of Claire’s affections.

It seems that Ben Weston (Robert Scott Wilson) will end up giving Claire one of Ciara Weston’s (Victoria Konefal) necklaces, and it will of course be treasured by Claire.

Charlie is shown in the new promo noticing the necklace, and Claire says, “Ben gave it to me.” That’s going to lead Charlie to wonder what on earth Claire is doing getting jewelry from some other guy. Well, Claire will probably explain everything sufficiently, and Charlie will learn that Ben is Ciara’s husband.

That would probably smooth everything out, but then the promo shows Claire rushing into Ben’s arms for a big hug right in front of Charlie. That’s probably not going to sit well with Charlie, who will surely want to know from Claire what’s going on and why she’s running around flinging herself into some other guy’s arms.

It looks like Claire may have to put up with some possessiveness on Charlie’s part, as he struggles to deal with Claire’s way with Ben.

Of course, the interesting thing here is that Claire used to be overly possessive and jealous of her boyfriends’ friendships with other women.

Days of Our Lives viewers will remember when Claire tried to get rid of Haley Chen (Thia Megia) by getting her deported so that she’d be away from Tripp Dalton (Lucas Adams). Now it seems that Claire may get a taste of her own medicine!

Next, the new Days of Our Lives promo shows Gabi DiMera (Camila Banus) walking in on Jake Lambert (Brandon Barash) and Kate DiMera (Lauren Koslow) in bed together.

It won’t be long before Gabi is rushing in and demanding to know what is going on, although the situation will be pretty obvious. Now Gabi is going to need to have a conversation with Jake about how she wants him back, and that’s going to get awkward.

Of course, from Jake’s perspective, he’ll point out that Gabi pushed him away with hurtful words before she left town, so what was he supposed to do – never sleep with anyone again?

Finally, the new Days of Our Lives promo shows some scenes from the return of Chloe Lane (Nadia Bjorlin). Chloe is shown reuniting with Brady Black (Eric Martsolf) outside the Salem Inn, and that should be a warm reunion, since Brady and Chloe have always been close.

Brady is shown asking Chloe about whether she’s got a man in her life – we’ll see what Chloe’s answer is.

Viewers of the DOOL app series “Last Blast Reunion” will remember that Chloe and Philip Kiriakis (Jay Kenneth Johnson) were interested in spending some time together at that point, but it looks like that may never have come to fruition.

Interestingly, Philip is shown in the promo also reuniting with Chloe and smiling big as he encounters her in town square. Will a romance blossom?

It looks like we’re in for an exciting week, so stay tuned! Stick with the NBC soap and don’t forget to check CDL regularly for the latest Days of Our Lives spoilers, daily episode recaps, and news.