Days of Our Lives Spoilers: When Will DOOL Begin Filming New Episodes – Will Production Start This Week? 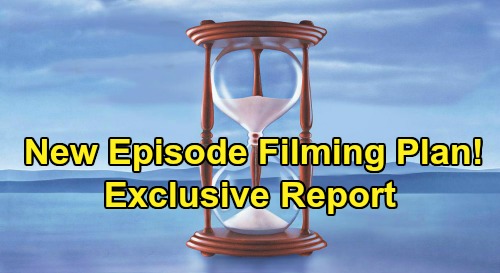 Days of Our Lives (DOOL) spoilers tease that the news out of Los Angeles County sounds optimistic when it comes to the prospect of DOOL filming new episodes soon. As you probably know, the show has been on hiatus ever since the coronavirus lockdown started. The good news here is that because DOOL tapes so far in advance, we’ve been seeing new episodes on our screens throughout the lockdown. But still, the show is anxious to get back to filming.

So, when could DOOL realistically get back to taping new episodes? Well, as you might have heard, LA County, which is where DOOL films, opened up for TV and film production to begin last Friday, June 12th.

But that doesn’t mean that DOOL is instantly back to filming this week, and it could be a while before filming starts again, despite the go-ahead from the county.

First off, there will be a host of safety regulations that DOOL will need to put into place before filming can start – and one of those requirements is that everyone involved in the show will need to be tested for COVID-19. That’s a big job right there, and it will take some time to complete.

And then it’s possible that someone could test positive for COVID-19. Of course, no one wants that to happen, but it’s always possible that one of the actors, for example, will test positive and then re-writes or even the abandoning of entire stories could be necessary…which will take more time before filming can begin.

There will also be precautionary measures such as set sanitization, hand washing stations, persons to perform safety and health checks, and this will take time to get into place and running as well. There will be personal protective equipment to get into place as well, and it will be a lot to organize.

And this isn’t even considering the fact that work permits for filming will need to be applied for and issued. Surely, DOOL will have to certify that it’s able and willing to meet all the new safety protocols to prevent the spread of the virus. How long will all of this take? It’s really an open question at this point, but it seems likely that it won’t be a quick process.

So, when should DOOL viewers expect for filming to begin? It’s truly difficult to imagine filming starting this week, when one considers all of the safety precautions that we’ve discussed so far that will need to be implemented, checked, and double-checked before filming.

And then there are issues such as union sign-offs, waivers, and insurer stamps of approval that will need to happen as well. Of course, all of this isn’t to say that DOOL won’t be up and filming relatively soon, but it does seem unlikely that the process will be up and running smoothly as early as this week.

We’ll keep an eye on the process and will let you know how things progress behind the scenes as we hear information. Stay tuned to Days of Our Lives and don’t forget to check CDL often for the latest DOOL spoilers, updates, and news.