Days of Our Lives Spoilers: Will A Xander Near-Death Experience Brings Sarah Back – Only Way to Win Back True Love? 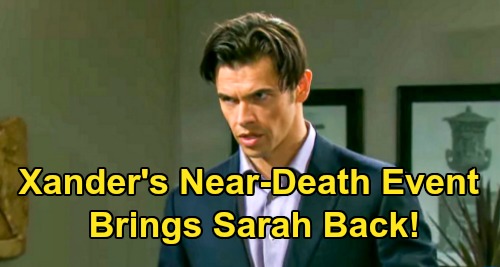 Days of Our Lives (DOOL) spoilers tease that Sarah Horton (Linsey Godfrey) will remain cold when it comes to Xander Kiriakis (Paul Telfer). Xander saved Maggie Kiriakis’ (Suzanne Rogers) life, but that didn’t do much to curb Sarah’s anger. When Xander tried to warn Sarah away from Brady Black (Eric Martsolf), that really pushed Sarah to her limit.

Sarah just wants Xander to stay out of her life at this point, but it’s hard when he’s still so madly in love with her. Of course, Days writers are doing exactly what they should be doing with Xander right now.

Xander’s heart was in the right place when he carried out the baby swap, but that doesn’t make it right. He has to pay for the things he’s done, so that’s what this period of suffering’s all about.

It’s easy for Xander to say he switched the babies to help Sarah and Maggie Kiriakis (Suzanne Rogers) avoid pain, but what about everyone else’s pain? Kristen DiMera (Stacy Haiduk) was so distraught over her daughter’s “death” that she accidentally killed Haley Chen (Thia Megia)! Brady Black has suffered and continues to suffer due to the baby swap Xander was part of.

Xander also delivered some harsh threats to Nicole Walker (Arianne Zucker) and Dr. Amanda Raynor (Victoria Platt) before the secret was exposed. Dr. Raynor truly thought Xander might kill her – and he seemingly came pretty close. Despite Xander’s impressive love for Sarah, this isn’t something that should be brushed under the rug.

Xander has to fall into the pit of despair before he can be built up again. Days is off to a nice start! Xander grew to love Rachel Black like she was his own daughter, but he’s lost her for good. DOOL fans know Xander’s also lost Sarah and his job at Titan Industries, so how much lower will Xander go?

Days of Our Lives spoilers say Sarah will spend this summer pushing Xander away. Sarah will stick to her plan and try to cut Xander out of her life completely. Goodbye, good riddance as far as Sarah’s concerned.

Xander prevented the death of Sarah’s own mother, but that barely registered with her. If that didn’t change Sarah’s mind, what will? Is there anything that could convince Sarah to give Xander another shot? Days may have to keep up this suffering theme with Xander. They could keep up the rescue theme as well and put Xander in a harrowing situation.

Would a brush with death help win Sarah over? Could Xander land in some jam where it looks like Sarah might lose him forever? Right now, Sarah’s choosing to shut Xander out. If fate’s making that choice for her, it could be a very different story.

We know a funeral’s coming up at the end of July, which implies that there’ll be a death. Naturally, that could be after someone’s presumed demise instead of the real deal. Xander might be a good option in that case. If Sarah thinks Xander’s dead, it might make her realize just how much he means to her.

Then again, Xander could just face a hospital crisis that finally breaks Sarah’s resolve. Regardless, it seems like it’ll have to be something pretty huge if Sarah’s ever going to forgive Xander. At the same time, Sarah and Xander seem destined for a reunion eventually. They just need some shocker to change Sarah’s mind and get them there!