Days of Our Lives Spoilers: Xander Gets Sarah Advice From Jack – Words of Wisdom Help Win True Love Back? 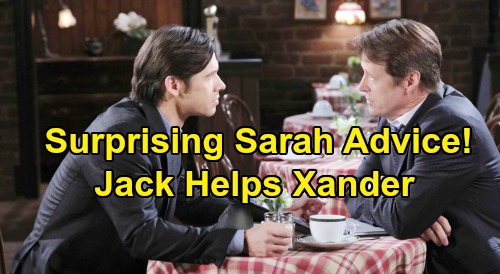 Days of Our Lives (DOOL) spoilers tease that Xander Kiriakis (Paul Telfer) has been an emotional wreck lately. As DOOL viewers know, Sarah Horton (Linsey Godfrey) is furious with Xander for a plethora of reasons. As if the baby switch wasn’t enough, Sarah has just learned from Brady Black (Eric Martsolf) that Xander nearly helped Kristen DiMera (Stacy Haiduk) steal her embryo back when Sarah was about to terminate her pregnancy.

Of course, Sarah got that news just as she was beginning to soften toward Xander slightly, and she promptly hauled off and slapped Xander when he tried to defend himself by saying that Sarah was going to terminate the pregnancy anyway. It was a bad scene.

At this point, Xander has pretty much lost everything – Sarah, his CEO position at Titan, and soon he’ll have the return of Philip Kiriakis (Jay Kenneth Johnson) to contend with. It’s possible that Xander could lose his position as Victor Kiriakis’ (John Aniston) right-hand man in pretty short order, and that would really leave Xander with virtually nothing.

Let’s face it, Xander doesn’t have real friends other than Maggie Kiriakis (Suzanne Rogers), and even Maggie is iffy on Xander right now, given what he did with respect to the baby swap.

It looks like Xander needs someone to confide in and maybe offer a little advice for his next steps with Sarah – that is, assuming that Xander can get Sarah to ever be in the same room with him again.

Well, according to DOOL spoilers, Xander will soon encounter someone who will listen and offer him some advice…Jack Deveraux (Matthew Ashford). Exactly how Xander and Jack will end up in the same airspace remains to be seen, but it seems that Xander will open up to Jack about his problems with Sarah, and Jack will weigh in.

While this might seem to be an unlikely pairing at first, it does make sense in a way. Decades ago, Jack had some truly awful things that he needed to deal with about himself – for example his rape of Kayla Brady (Mary Beth Evans).

It’s something that Jack struggled with for years, but he eventually put his life back together and found love with Jennifer Deveraux (Melissa Reeves).

Perhaps Jack will draw on his own experience and make some parallels to “coming back” from doing truly awful things in his own life and the awful things that Xander has done.

Whatever the case, it seems that Xander will need a friend, and Jack will happen to be there to offer his two cents. Perhaps Jack will tell Xander that only time can heal some wounds, and that other wounds can never be truly healed, yet life goes on.

Or maybe Jack will offer some advice to Xander about what he should do or say with respect to Sarah. We’ll see what happens here, but we’re definitely looking forward to the conversation between Jack and Xander.

What advice do you think Jack will offer to Xander? Stick with the NBC soap and know that you can rely on CDL for all of your soap updates. We’re here for you with the latest Days of Our Lives spoilers, daily recaps, and news.