Days of Our Lives Spoilers: Xander’s Crimes Exposed – Sarah Must Give Up Mickey, Kristen and Brady Get Baby Back 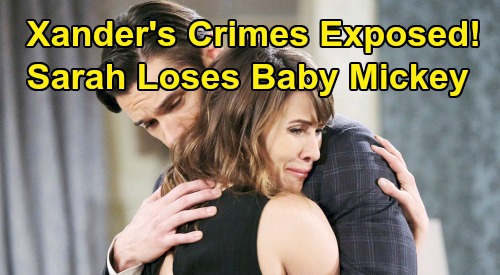 Days of Our Lives (DOOL) spoilers tease that Xander Kiriakis (Paul Telfer) has some terrible secrets, and they’re definitely not going to score him any points with Sarah Horton (Linsey Godfrey) – at least not initially.

DOOL fans know Xander’s done some awful things during his run on the show. Telfer brings a certain charm to the role, but we can’t forget that Xander’s been a murderous menace at times.

Xander’s caused so much pain, particularly to Eric Brady (Greg Vaughan) and those closest to him. It’s easy to see why Sarah put up so many walls with Xander and made him work so hard to win her over.

However, Xander’s unwavering devotion seems to have paid off. Although Eric pushed Xander out of the picture, Sarah has kissed Xander passionately and clearly cares about him.

Unfortunately, secrets have a way of getting out on Days of Our Lives. It turns out Xander’s hiding some real doozies from Sarah – ones that’ll change her life forever.

This will just serve as proof to Sarah that Xander hasn’t really changed. She adores her mother, but she won’t like hearing that Xander sent innocent Will to prison for this.

Poor Will’s been consumed with guilt and sadness. What about Arianna Horton (Sydney Brower), who’s stuck without her daddy on the outside? Will’s missing recitals and crucial moments of Ari’s childhood, which is Xander’s fault.

However, Sarah could probably get past all that knowing that Xander did what he did to protect her mom. She deceived Eric about Mackenzie “Mickey” Horton’s paternity, so she knows what it’s like to be backed into a corner and make a wrong decision that somehow feels necessary.

Unfortunately, it’s what Xander did to protect Sarah that could be the bigger problem. Xander switched Sarah’s dead baby for Kristen DiMera’s (Stacy Haiduk) on that fateful night.

If Xander hadn’t followed Victor’s orders, Sarah would’ve learned her daughter was gone and grieved accordingly. It would’ve been difficult, but she would’ve worked through that grief in time.

Sarah would’ve moved on despite the pain – just as many moms who have lost children do. Loss is a difficult part of life, but that doesn’t mean you start stealing babies and passing that loss on to someone else.

Days of Our Lives spoilers say Sarah will eventually be hit with a serious shocker. She’ll find out that Mickey isn’t really her daughter, so devastation is inevitable.

Not only that, Sarah will realize this man she’s truly fallen for is responsible. Losing Mickey after all this time will be so much worse than grieving a baby she didn’t bond with.

Sarah’s sure to be livid with Xander and could really go off the rails. This could bring Xander’s worst fear of Sarah turning against him and perhaps reuniting with Eric as she mourns.

Sarah will have to accept that she lost a child she’ll never get to know. She’ll also have to give up the one she did connect with. Sarah has been Mickey’s mom in every way that counts from day one.

After playing that role, she’ll hate that Xander robbed Kristen of all the mother-daughter moments Kristen could’ve had otherwise.

Once it’s time to hand Mickey over to Kristen and Brady Black (Eric Martsolf), Sarah’s going to be shattered. It’ll be tough for Xander to come back from this, but soap couples have come back from worse! Days of Our Lives fans probably shouldn’t count on “Xarah” being over for good.

It sounds like some hot drama’s ahead, so stay tuned. We’ll give you updates as other Days news comes in. Stick with DOOL and don’t forget to check CDL often for the latest Days of Our Lives spoilers, updates and news.