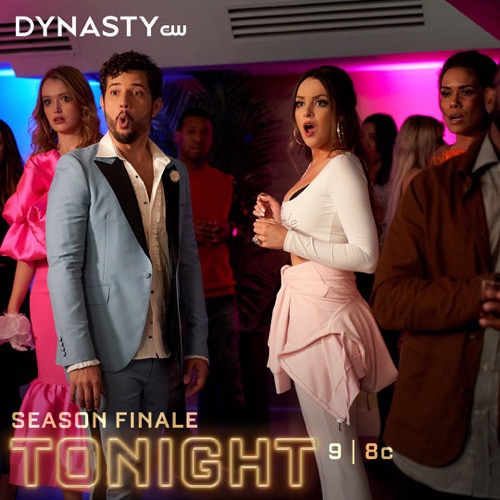 Tonight on the CW Dynasty the reboot of the 1980 series that followed the Carrington family airs with an all-new Friday, May 8, 2020, episode and we have your Dynasty recap below.  In tonight’s Dynasty season 3 episode 20 “My Hangover’s Arrived,” as per the CW synopsis, “In the season finale, it’s time for Fallon’s surprise Bachelorette Party and things go exactly as one would expect in the world of Carrington.”

Fallon tells Kirby that is upset that Liam kept the kidnapping from her, it means he doesn’t trust her. Fallon says she is smart, her lawyers have worked on a prenup, thank goodness. Fallon goes to leave and someone puts a hood over her.

Anders walks in the house and he asks Kirby what has been going on, she doesn’t say.

Alexis is with Adam and he tells her that Blake is a cruel and heartless monster, which is why he is prepared to continue this battle. He has good news for her, guess who Blake has named second in command for Carrington Atlantic, him.

Fallon is on a plane, Sam, Krystle, Kirby are there, along with her assistant, they are going to whisk her away for her bachelorette party. They arrive at a hotel in Vegas, they have a private bartender in their room and she prepares drinks for them. The next morning, they wake up and the place is a mess. Fallon wakes up with a blow-up doll, and she is missing her engagement ring. And apparently, she got married, and she is assuming it was not to Liam.

Anders walks in Blake’s office while he is speaking to Adam. The press got wind of his stealing oil from a small nation of Moldavia. The department is launching an investigation. Until this investigation is over, all Carrington Atlantic operations are suspended.

Fallon shows everyone a torn marriage license that she has in her hand and she says this is not good. Sam says his head hurts. Fallon is in a flaming pink dress with a diamond necklace and diamond earrings on. Krystle looks like she got punched in the face. Nobody can find their purses or wallets, or their cell phones. Fallon says this is the part where they say this is a joke. They head to a bar that is printed on a Bide To Be sash, they head there and they do find Kirby’s phone.

Adam comes in the speak to Blake and tells him that he has been thinking about him stopping the investigation, what if he gets caught doing this, maybe he should go. Blake says he’s got this.

Alexis walks into Culhane’s place and barges right in, she goes right to his bedroom and finds him and Mia in bed together. Later, he tells her that he didn’t want her to find out like that. But since the cat is out of the bag, he wants a divorce. She tells him that there is still a way that they both can get what they want. He says he has a new liver and a new lease on life, he really likes Mia. She says they had a deal, one year of wedded bliss in exchange for her testimony.

Next, Kirby, Fallon, and Sam head into a store and find out that Fallon was talking about a wedding to Scorpio – and he has surveillance video; they robbed the store. The manager says he hit the silent alarm as soon as he saw them coming back, the police take them out of the store. Kirby turns to Fallon and tells her that she has a new name for her, Felon.

Anders tells Blake that it is hard to write a nice profile for Adam when he has violent outbursts. Meanwhile, Kirby, Krystle, Fallon, and Sam are in jail. They all start arguing when Culhane arrives. Kirby called him. He bails out everyone, but they realize that they don’t know where Allison is. Fallon tells Kirby that Allison is probably the person that has been calling her all day. They call the number and it is Allison, she is in the hospital.

Alexis meets with Mia, she says she is so happy that Jeff has found someone. She asks if she is stepping on her toes, she says no.

Blake goes to Olivia to get the investigation stopped and a smoke bomb is thrown through the window, it says Moldavia on it, Olivia freaks out and tells him that she is not helping him. Blake tells Adam what happened, he says that Olivia was shaken and really upset, but he was able to turn things around, he blackmailed her.

Alexis sets up Mia, makes Jeff think she is an escort. While Anders finds flowers in the house with a card, it is from Adam to Kirby, now he knows who her love interest is.

Jeff figures out that Alexis set up Mia, he asks her why she did it, she says because she is her wife. He tells her that he has had enough of this he is filing for divorce in the morning.

They arrive in the hospital to see Allison, she is there because she hurt herself when she fell off a mechanical bull. Krystle goes to help Allison change and finds that she has written on her back the name of a strip club, that is their next stop. The bouncer at the club tells them that they were banned from the club the night before. Allison flashes the guard and runs in, the rest run inside as well.

Adam is with Alexis, he tells her about Blake. He tells her that she is the one that told him to never give up. He says he has a new plan and all he needs is her trust and a little money.

At the club, Scorpio comes on stage, and he is wearing Fallon’s ring. She goes up on stage to get it, he sits her down on a chair and strips in front of her. Fallon drags him off stage, he says he was wondering when they were coming back. Fallon says they got married last night, Scorpio says he didn’t marry her, he married Sam.

Alexis goes to speak to Jeff and tells him that there is something between them and she wants to stay married. He tells her that he doesn’t like the stunt that she pulled on Mia. Alexis says Mia is boring. Jeff grabs her and kisses her.

Scorpio tells Fallon that Sam and he got married at an all-night chapel. He gives Fallon her ring back. Sam and Scorpio are alone, Scorpio asks him if he can call him if he is in Atlanta because last night was pretty cool.

In the plane, Fallon says that she now realizes that the prenup was silly. Sam finds photos on his phone of their night in Vegas.

Anders tells Kirby that he knows she is dating Adam and he is not happy about it.