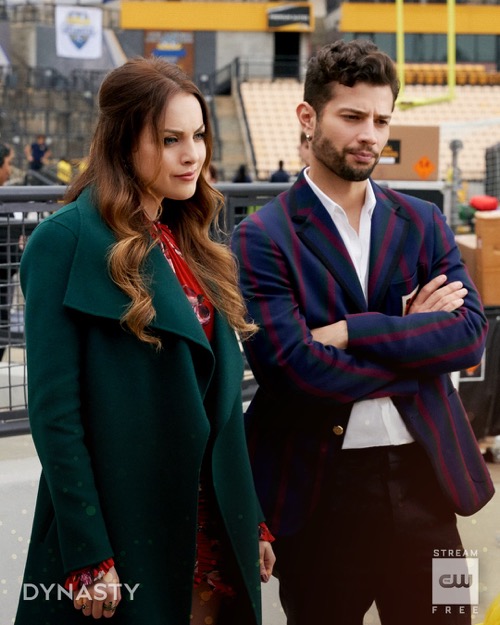 Tonight on the CW Dynasty the reboot of the 1980 series that followed the Carrington family airs with an all-new Friday, January 31, 2020, episode and we have your Dynasty recap below.  In tonight’s Dynasty season 3 episode 11 “A Wound The May Never Heal,” as per the CW synopsis, “With Alexis back in the picture, Blake attempts to comfort Cristal while he also works to reestablish himself. Fallon decides to expand her empire and seeks a favor from Culhane. Sam’s love life continues to heat up, and Colby is forced to consider lesser options for his plan. Kirby and Adam form an unlikely friendship.”

Blake is ripping apart his office in rage and Alexis walks in. She tells him it is quite a tantrum even for him. Blake tells her that he doesn’t want to talk to her and she better not apologize. Alexis says she has nothing to apologize for. Blake is surprised, he tells her that she shot and killed Mark Jennings while aiming at his wife. Alexis blames him because he made her desperate and she had no choice but to resort to desperate actions. Blake grabs her, throws her on the desk and strangles her – then he wakes up. Krystle is beside him, she asks him how they can get Alexis out of their lives, he says there is no use trying, she is like a whack a mole and just keeps turning up. Blake tells her that he has a big day planned and he doesn’t want Alexis ruining it.

Fallon is at lunch with Kirby, she says they are calling her the forgotten Carrington. Fallon tells Kirby she is taking Fallon Unlimited international. Kirby tells her that she has plenty of ideas for content if she needs help.

Alexis finds Adam in the guest house, she tells him that she hopes he is not waiting for Blake to forgive him because it is not going to happen. Maybe, he can help her and Jeff, and it would mean the world to her if her husband and son could get along. Adam wants no part of it, he says he is going to remain neutral.

Fletcher and Sam are in bed, Sam is trying to rush off to get to work.

Kirby sees Adam at the door to the main house, she tells her not to mention that he is there, he has to get something from his room. Kirby asked what he did, he says just a little arson.

Fallon goes to see Michael and pops a bottle of champagne, he is confused. She tells him that half of Spain will be watching the soccer game, she wants in during the half time game. Michael tells her this is not the Superbowl, nobody watches the half time show. Fallon pouts, Michael gives in, she takes whatever she can get.

Jeff is on the phone, his third offer is rejected, Alexis is there, he tells her. Alexis tells him that they need to move fast, they did their homework and they have to use it. Jeff says no way, he is not comfortable with blackmail. Alexis says she has a solution, Adam. Jeff calls Adam a whack job and says he can’t work with him, he walks away from her. Alexis picks up the phone and calls Tony, says she needs a favor, someone needs to tell Blake there is an intruder on the property.

Fallon goes to see Blake and asks him why he has to find the one thing she is working on and sabotage it. Blake says it is just a coincidence. Blake says he thought she would be eager to rise to the challenge and not act like a little girl.

Adam is with Alexis, he says he can’t believe that Blake is doing this to him. Alexis says don’t worry, she has his back, and she is going to make sure that he stays on the property. Adam says he is ready if she still wants his help.

Krystle goes to see Alexis, who is working out. She asks her if she has any remorse for what she did. Alexis throws the workout ball at Krystle and says she doesn’t have to pretend any longer that she likes her.

Adam jumps in Jeff’s car, he is surprised. Adam asked if can put aside their differences just for today. Adam asks him if he will feel better if he punches him in the face, Jeff punches him and says he feels better.

Adam goes into disguise and does the job. Jeff later meets with Alexis and tells her that he can’t believe that she would make him work with Adam when he poisoned him, and they have to be on the same page or this is not going to work.

Michael and Fletcher ask Fallon what she did to the half time show, she runs.

Blake is home, Krystle is there and she looks upset. She says she doesn’t know why he is attacking Fallon. Blake says Fallon likes him to look like a bad guy, Krystle says maybe he is a bad guy, he likes to manipulate people’s emotions to serve his own selfish needs. She then says she also saw Alexis, and want to know that if they knew it was her and not Mack that caused the death of their unborn child, would she have received the same punishment. He tells her to stop torturing herself with what-ifs.

At the game, Sam is in a mascot suit, fireworks are going off and he is on fire. Somebody uses a fire extinguisher to put the fire out and the banners overhead get burned, the only thing people can see is F U Spain. Michael and Fletcher look like they are going to faint and Fallon says that is unfortunate.

Kirby made dinner for Adam, they are sitting down enjoying a drink and talking. She tells him that maybe they can get to know each other a little bit better, he pours another glass of wine.

Fletcher is furious and blames Sam for ruining the half time show. Fletcher says he really likes him a lot but he is wondering if he is purposely sabotaging their relationship.

Krystle walks in to see Adam and slaps him across the face for trying to poison Jeff. She tells him that she is a package deal with her husband and if he doesn’t makeup with him, she will have to side with Blake.

Michael tells off Fallon for ruining the half time show.

Krystle goes home to Jeff with Adam, she tells Jeff that they need all the help they can get to take down Blake.

The next day, Fallon sits down to lunch with Krystle, she says she will not have her life defined by Blake. Fallon offers to pay for lunch, Krystle says she is rich now, Fallon agrees but says for now.

Sam goes to see Fletcher and brings him flowers, says he is sorry. Boyfriend is one step closer to husband, and he is sorry. Fletcher says he should have called before coming. A man calls Fletcher and asks who he is speaking to, he says nobody, just a salesman.

Fallon goes to see Michael and says despite the halftime show going a little crazy, it still did some good. Kortland was so impressed with their numbers, they have decided to re talk merger, and leave Blake in the dust. She throws a paper on his desk, an offer for the official naming rights for the stadium. Here on out, she says she is not going live in the shadow of Blake.

At breakfast, Blake and Krystle are apologizing to each other. Krystle says anger leads to more anger, she is going to break the cycle.

Meanwhile, Jeff changes his mind on bribery, he and Krystle are in the Carrington Atlantic office forcing them to sell.

Krystle is on the phone with someone and speaking Spanish, she tells them that she wants Alexis Carrington dead.