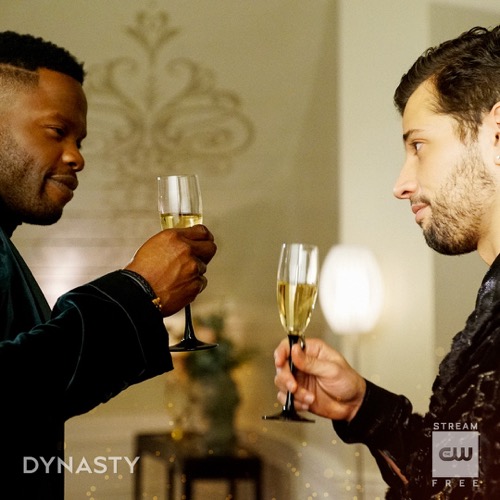 Tonight on the CW Dynasty the reboot of the 1980 series that followed the Carrington family airs with an all-new Friday, February 28, 2020, episode and we have your Dynasty recap below.  In tonight’s Dynasty season 3 episode 15 “Up A Tree,” as per the CW synopsis, “Fallon offers to keep an eye on Connor while Liam follows a lead on his baby mama.

Dominique and Vanessa put the wheels in motion for a reality show and get Culhane to play along, while Cristal looks after Beto.”

Blake comes down to breakfast to find Dominique in his chair filming a reality show as Vanessa throws something at her head for sleeping with her boyfriend. Blake tells her that this isn’t happening in his house and kicks them all out of the room.

Crystal is visiting Beto in the hospital. He is still in rough shape. Meanwhile, Jeff tells Alexis at breakfast that it was probably a blessing they didn’t get the pharmaceutical company. They’re years away from the cure for his disease.

Vanessa visits Michael and tells him that she just wants to move forward. She isn’t gonna let this define her. She starts to talk about her reality show and documentary. He cannot believe that she’s moving forward with this. The least he could do is make an appearance, she tells him.

Alexis visits her son at the hospital and tells him that Jeff is getting worse. He confused the sugar and salt this morning. He needs a real doctor.

Liam comes home to tell Fallon that he has a lead on Heidi. The two of them are still caring for Conner as Heidi is missing. It looks like she’s been seen in Alabama, possibly. Liam said he’s going to go there and asks Fallon to care for Connor. She isn’t happy about it but she’ll do it.

Blake and Crystal wake, he’s so happy to have her with him. She doesn’t want to go but she has to pack for Mexico. She tells him that she is going to a bridal shower.

Fallon is having a hard time keeping Connor entertained and fed. He won’t stop eating. Meanwhile, Crystal gets on the jet with Beto. Blake makes a surprise visit and is shocked to see Beto. I would’ve anger found let’s drop that Connor‘s mother ran away. He becomes very upset, running into house and away from Fallon.

Crystal explains that Beto was injured at Fallon‘s engagement party. He doesn’t remember anything but she knows if the police question him that they will probably pin it on him. Blake is supportive, telling her that they are a team.

Michael and Vanessa are filming her show in front of a fireplace will they have drinks. She starts to sing to him. Sam enters the scene but yells cut because he isn’t happy with his shirt. Off-camera Vanessa invite Michael to her album release party. He looks confused.

Adam comes to tell Alexis that the treatment Jeff needs is available at his hospital because it’s still going through trails. He could steal it but he could get in trouble. Alexis comes out into the yard to find Fallon looking for Connor. Fallon pretends that they’re playing hide and seek. After searching for a bit, Fallon comes clean with her mom about what’s really going on. She tells her she doesn’t need her help, she didn’t help when she was a kid and she’s not going to help now. Seconds later, Fallon finds Connor in a very high tree.

On the jet, Beto starts to choke. Blake gives in the Heimlich. He spits out a bunch of pills. Crystal becomes very emotional.

Alexis goes home to tell Jeff about the medication she spoke to Adam about. After Adam tried to poison him there’s no way he’s trusting him. Alexis doesn’t know why he’s so hung up on this.

Oh and the yard, Liam arrives to see Connor in a tree and Fallon somewhat frantic. Liam whispers to Fallon that he just missed Heidi while trying to console Connor.

On the Jet, Crystal admits to Blake that Beto planted a bomb in Alex‘s car. The explosion was a mistake. She wants to kill Alexis because of what she’s done to her and Blake. Blake tries to console her, nobody died.

Adam brings Alexis the medication. The to talk about dragging Jeff behind his back. Meanwhile, Michael shows up at the launch party.

Fallon manages to get Connor to agree to come out of the tree by sharing her own story of her mother and disappointment. As he attempts to get down, he falls into the river. Liam jumps in. Michael arrives out of nowhere to help. They save him.
While at the launch party, Alexis drugs Jeff’s drink with the pills but it looks like Sam may have drank it instead. Back at the hotel.Fallon, Liam and Connor comes face to face with Heidi.

Blake and Cristal return home. He kicks everyone out of his house there to attend Vanessa’s launch party.

Heidi shares that she needed some time to cool off, figure things out. Liam cannot believe she would do this. She apologizes. Fallon tells Liam they cant just hand him over and give up. They are going to fight.

Vanessa tells Michael they could try and give it another shot. Meanwhile, Cristal wants to do more in her life and help others. Vanessa tells her stepmom that Michael is in for the show. Back at home, Jeff tells Alexis he isn’t feeling well. He collapses.