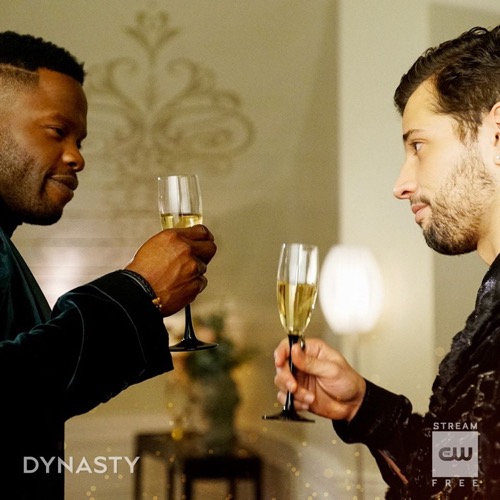 Tonight on the CW Dynasty the reboot of the 1980 series that followed the Carrington family airs with an all-new Friday, February 28, 2020, episode and we have your Dynasty recap below.  In tonight’s Dynasty season 3 episode 15 “Up A Tree,” as per the CW synopsis, “Fallon offers to keep an eye on Connor while Liam follows a lead on his baby mama.

Dominique and Vanessa put the wheels in motion for a reality show and get Culhane to play along, while Cristal looks after Beto.”

Blake and Krystle are jogging, the took look very happy together. She tells him that they still need to get the hospital board to give them the green light, he says he is already on it, Anders has arranged a walk through this afternoon with the hospital Chaplain, father Kelley. One word from him and it will be approved.

At breakfast Sam tells Kirby that he is really busy, she says she is bored. Then, Kirby tells him he should get an assistant, her. She tells him that she has planned lots of events and would be great. He gives in, but just a trial run this weekend.

Fallon is with Liam, they are talking about Connor. Laura comes in and Fallon tells her to feel free to skip the wedding. Liam tells the two to calm down. The lawyer, Randall has arrived. He tells them that Liam gave away his parental rights a long time ago.
Alexis is with Jeff in the hospital, he is awake, she tells him that he fainted after the party. Adam tells Jeff he will be monitoring him himself. Jeff asks who is going to monitor him.

Outside the room, Alexis and Adam speak, he tells her that they should tell the doctor that they dosed Jeff so they can medicate him properly. Alexis says no way.

Fallon and Liam go to see Heidi, she is packing up. Fallon asks what about her plan to stay in Atlanta, Heidi says it wasn’t real it was just to see how they felt about having a kid around. Liam tells her that he wants her to say and will pay all costs for her and Connor not to leave. Liam says he wants an opportunity to spend time with his son, Heidi says they have a life back in California and she is looking forward to getting back to it. Liam tells her it is easier to stay there where there are people who are willing to help her.

Fallon goes to see Blake and tells her that she needs to learn how to take kids from their mothers and she wants him to show her how since he is an expert.

Anders found the place where Heidi stayed when she disappeared, he tells Fallon, then she asks Blake if he is up for a day trip.

Adam is in the hospital, he goes to check Jeff’s file to see what was ordered for him.

Sam is with Kirby showing around a client when Ramie shows up at the door to the venue. Sam tells her to take the clients to the VIP room while he deals with Robbie.

Adam tells Jeff that he is suffering from acute liver failure, they just need a donor and the best donor would be a family member. Jeff asks Adam what he was doing looking at his file. Alexis is there and she tells Jeff that Adam gave him Copophine, the experimental cure. Jeff is furious, he tells Adam that he better find a way to make him better or he is going to prison.

Sam asks Ramie what he doing there, Ramie needs to crash, he has nowhere to stay. Kirby walks up asks what Ramie is doing there, he says he is a friend.

Adam is with Alexis, he tells her that the only one who is a match is him. He already donated to his adopted mother and the chance of a donor surviving a second transplant are very low. However, there is someone at the hospital who is a match and is going to die any day now is not a registered donor.

Fallon and Blake arrive at the place where Heidi stayed, they are told that it is a female-only retreat. They are greeted by a woman who tells them that Heidi couldn’t get out there fast enough, she was just looking for a signal so she could call her son.

Krystle calls Blake to see where he is, he is in a plane with Fallon and assures her that they will be home soon. He tells her that he couldn’t say no to his daughter. She tells him that the chaplain wants to meet, he says she is a good catholic girl and she can do the meeting alone. Blake tells Fallon that there are no skeletons in Heidi’s closet. Fallon tells him it is time to buy some bones and build their own.

Krystle in a rehabilitation center looking for father Kelley, she is told that he retired a week ago and she should speak to father Collins, the new hospital priest. But, he just happens to be a guy she snubbed at the center the day before. He basically tells her, she is not getting his help.

Fallon goes to see Heidi since Connor and Liam are doing their night out at the arcade, they could do their own mom’s night out. Heidi is in.

Adam asks the wife of the man who dies who is a liver match for Jeff. He mentions to her that he has a patient that will not make it through the night unless he gets a liver. Alexis bursts into the room and says, “is the woman whose husband is going to save my husband’s life.” Alexis thanks her and tells her that she is internally gratefully. The woman tells Alexis that donating an organ is against their religion and she will not forsake his soul for her. Adam takes Alexis to the side and tells her to calm down, they are going to steal the liver.

At the event, Michael and Kirby are talking when the commissioner walks up and says somebody stole his Rolex. He was in there to wash his hands, he turned around for a second and somebody stole it. The commissioner says he made a mistake when he decided to hold the venue here. Ramie shows up at the party and Kirby accuses him of stealing the watch.

Kirby is outside with Heidi and pretends to forget her phone upstairs, she tells Heidi to take the car and meet her around the side of the building. When the valet brings the car and calls for Mrs. Carrington, Heidi says that it is her and takes the car.

Adam is trying to take the man’s dead body and Krystle shows up and wants to talk about the clinic. He tells her that he has bigger things to do and unless she wants him to block the vote, she better leave. Unfortunately, Krystle’s visit causes the body to be brought down to the morgue and spoils Adam’s chance to take it.

Heidi is pulled over by the police, the valet says the car was stolen.

Later, Adam tells Alexis that because the body was brought down to the morgue, when he finally got to the liver it was deemed useless. Alexis asks him to tell Jeff.

Blake arrives home and Krystle is upset that he shows up in a valet outfit and he is helping Fallon while there is a new chaplain and he won’t help her.

Adam goes to see Jeff, he tells him that nobody in his family is a match, he is already showing early stages of liver failure and once that starts, there is no going back. He has about 3 or 4 days. Jeff says he doesn’t want to see anybody, he doesn’t want them to see him like this, he just wants them taken care of. He asks Adam to write down some things for him.

Ramie arrives in his room, Sam found the Rolex in his room. Sam is upset and says he is lucky he doesn’t call his parole officer. Ramie says he never opened his mouth and if he did, Sam could have ended up in there with him. Ramie says he is sorry and asks for another chance.

Heidi and Fallon arrive back in their apartment, Liam is there, Fallon tells him about the car that she jacked. Liam tells her that this can go all the way, she just needs to agree to a couple of things. Heidi tells Liam that Connor is not his son, she had an affair with his father. Connor is his brother. Heidi says she promised that she would keep the identity of Connor’s father a secret.

Liam goes to see his mother, she knew about Connor being his brother. She says that she did it for Liam. Fallon says that someone who loves him would never do that to him, he can’t trust her. Liam tells his mother to not bother showing up at the wedding.

Sam gives the watch to Michael, tells him it was found on the floor. Michael tells Sam that Kirby did a great job with the party.

Adam goes to see Alexis, he tells her that he has decided to go ahead with surgery, he took a vow to do no harm and he can’t let Jeff die. He says he realized how many people Jeff is leaving behind and if he dies, the only one that would notice would be her.

Alexis goes to see the new chaplain, she confesses to him that the clinic was supposed to be her absolution. She says she can’t do anything to repair the harm she has done but she can only do good moving forward. He says that he will help her, she apologizes for getting off to a rocky start.

Connor and Heidi are packed up and ready to go. Connor asks Liam if he will come and visit him, he says yes.

Fallon goes to see Blake, she thanks him for helping him with Heidi. Then she tells him that she and Liam are moving back into the manor. Blake welcomes her back.

Jeff and Adam are prepped for surgery.

Blake has a visitor, it is Laura. Anders offers her tea, coffee or a horse tranquilizer. Laure tells Blake that she has her way, they will never be inlaws. She says she is the final approval if VKI needs to send Carrington Atlantic to Jeff Colby. If he has Fallon terminate the wedding, she will block the sale and make sure the company is sold to him.