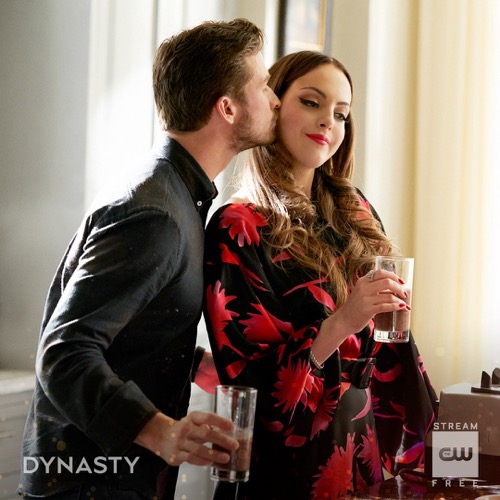 Tonight on the CW Dynasty the reboot of the 1980 series that followed the Carrington family airs with an all-new Friday, April 10, 2020, episode and we have your Dynasty recap below.  In tonight’s Dynasty season 3 episode 17 “She Cancelled,” as per the CW synopsis, “Fallon’s world turns upside down when she becomes the internet’s new queen of mean and her relationship with Liam is tested.

Culhane’s birthday becomes the main event, but Dominique’s new project has him questioning Vanessa’s true intentions. Cristal and Blake hit a rough patch, while Alexis finds herself in demand as the new advice guru on a popular podcast.”

Its breakfast time, Blake made French toast and burned it. The cook has the flu and the family is taking over. Cristal walks in, Fallon tells her there is plenty of French toast left. Anders wants them out of the kitchen.

Sam is with Kirby, she eats his cheese puffs. Ramy shoes up, Sam leaves with him. Fallon is in a meeting with Alexis, her assistant comes in and gives her some reviews. Alexis tells her that she wants to help her make this upcoming wedding good, and spend time with her beloved daughter. Fallon sees a podcast on the computer, she goes over to watch it and Alexis watches in. Employee reviews leaked online, Fallon is being called a horrible boss and the woman that she wants to design her wedding dress, Gigi, won’t do it because of the reviews. Fallon’s plan is to go on that podcast, change everyone’s mind and convince Gigi to make her dress.

Culhane and Vanessa are sitting at the table when Dominique shows up, she brings him a cupcake for his birthday. Vanessa tells him that he deserves a party. Dominique says she was thinking something sexy like a pajama party.

Cristal is with the new hospital Chaplain, Caleb Collins. They don’t have much time to talk, he tells her that he forgot about something and has to go. Meanwhile, Blake meets with Laura and the plan is that he is going to break up Liam and Fallon.

Cristal is again with the chaplain, he tells her that they are two adults that work well together. Steven wants to work with them.

Fallon is on the podcast with Sidney, she says she is there to clear her name and she is all about kindness. Sidney asks how it feels to have the whole internet against her. And, Gigi was too quick to believe what she heard. There is a visitor on the podcast, it is Alexis, Fallon looks like she is going to faint.

Sam hired Ramy to be Kirby’s assistant, she is upset, he tells her he is not asking.

Back to the podcast, Fallon tries to jump in and interrupt Cristal, but no luck. Sidney gets a caller for Alexis, a person wants advice.

Culhane is enjoying a coffee with Anders, he says he wants to have a party to use to make a business announcement. He tells him to keep an eye on Vanessa and try not to appear in any more sex tapes.

Fallon and Cristal are leaving, Cristal tells her she was trying to humanize her. Fallon is furious and tells her to stay out of her way.

Liam is with his mother, he says she has five minutes. She bribed him with his father’s watch for him to agree to have lunch with her. She wants to talk about the wedding, but he doesn’t want to discuss, he does leak out that Fallon wants Gigi to design her dress. Laura offers to introduce Fallon to Gigi, he says that would be a really nice surprise for her.

The chaplain, Cristal and Adam are at the house tasting food for the gala. Blake walks in and tells Adam that after he tastes the food, to get out.

Fallon is back at the office, she is upset about the podcast. People are tweeting, they love Alexis and her input on the show.

Kirby and Ramy are working together, they are butting heads. They both pitch their ideas for a party and Sam likes Ramy’s idea more.

Fallon goes to see Alexis, she apologizes for stealing her spotlight. Alexis says that since the podcast that she is being flooded with emails. Fallon is annoyed.

Vanessa goes to see Culhane and brings him his gift for his birthday.

Laura is in the mansion, Fallon walks in, Liam is there and tells her that Gigi is on her way there, he made the arrangements to get her to design her dress. Fallon doesn’t like it. Liam tells her off, she says she is going to Culhane’s part alone. Fallon goes upstairs, Liam follows. Blake walks out of his office and turns to Laura, says and she doubted him.

Time for Culhane’s party. Blake pays the security guard who is watching the camera coverage of the part so he can Laura can look in.

Sam and Kirby get into an argument over Ramy, she is upset that he didn’t tell her about the Rolex he stole.

Fallon gives a kiss to Culhane for his birthday, Liam walks in and sees it. Culhane wants to make an announcement, but Dominique makes one first about a song of Victoria that has been going well.

Liam is with Fallon, he tells her that she has been relying on her ex a little bit too much, he admits he saw the kiss. Fallon can’t believe it, she says if he doesn’t trust her then maybe they should hold off on the wedding.

Alexis is back on the podcast, Fallon calls in and says her name is Frankie. She says that her employees don’t like her and she wants to change things, but she doesn’t know-how. Alexis says she has to stop trying to be the perfect boss, just control what she does next. She says she is an amazing daughter and boss, and will always have her back.

At home, Blake, Fallon, and Liam are making peanut butter sandwiches and he tells them great performance tonight. The three of them are in on it. Blake asks if they can keep this breakup going long enough for him to do what he has to.

Sam finds his safe open, there is a bag of cheese puffs inside.

Fallon tells Alexis they are going to hold out on sending out the wedding invitations. Fallon wants to give Alexis her podcast, but Alexis says she has other offers. In the end, Alexis makes a deal.

Kirby comes into work, Sam is there and tells her that Ramy stole from the safe. She says she wants to keep the job, but she doesn’t think she wants to be friends again right now.

Anders shows Culhane a video of Vanessa in cahoots with her mother, they are playing him.

The chaplain is with Cristal, she wants him off the project because he is getting too intimate with her. He admits that he has feelings for her. He kisses her, she kisses him back. Adam is watching from the window.

Laura and Blake share a drink. She tells him she has good news, she is going to fire Carrington Atlantic CEO Dustin in the morning, so Colby’s blackmail plot against him won’t mean anything and the path will be clear for him. Great, he says he broke up Fallon and Liam for nothing. She says she knows exactly what she was doing. They kiss.