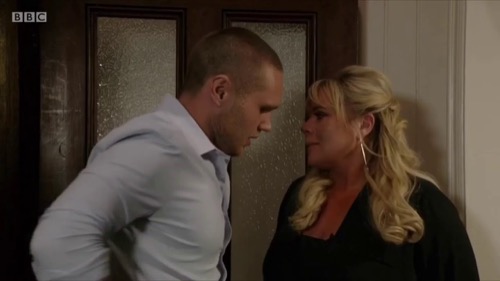 Eastenders spoilers reveal Sharon Mitchell (Letitia Dean) is acting like a desperate, victimized woman. Even though she made her own bed that she now lays in, in her mind she has been wronged. Now that Keanu Taylor (Danny Walters) is back, she thinks he can save her, especially when he offers for them to ride off in the sunset together. However, she would be his second choice and even if she’s willing, someone interferes.

Keanu Taylor’s Offer – When Keanu snuck back into Walford, he approached Sharon and gave her an offer that’s hard to refuse. He suggested that they run away together and raise their child somewhere far away. She is actually considering this even though technically she would be Keanu’s second choice. His first was Louise Mitchell (Tilly Keeper) and their daughter, but she isn’t around anymore.

Sharon Mitchell’s Desperation – Eastenders spoilers tease Sharon is actually desperate enough to consider Keanu’s offer and the two even kissed. It seems that Sharon really is playing the damsel in distress card.

Instead of leaning on a man, whether it’s Keanu, Phil Mitchell (Steve McFadden) or even Ian Beale (Adam Woodyatt), she needs to make her own way in life. Work as an independent woman and save money to get her own place. Make a solid, respectable life for herself as well as for her children no matter how pregnant she is.

Eastenders Spoilers: Phil Mitchell’s Revenge Reignited – It is suggested that Phil will be out for revenge and so will Ben. After all, Callum is in serious danger. Somehow, Phil, Ben and Keanu all end up on a boat, which is supposed to be the setting for a party. Someone is going to end up paying a very dear price.

Ben Mitchell Interferes – Eastenders spoilers tease that meanwhile, Sharon will make a plan to flee with Keanu. She plans on taking her older son until he tells someone else about the “move.” This will set off a chain of events that gets Ben involved that will interfere in Keanu and Sharon’s plans. Who will win this battle and more importantly, who ends up losing their life as a result?