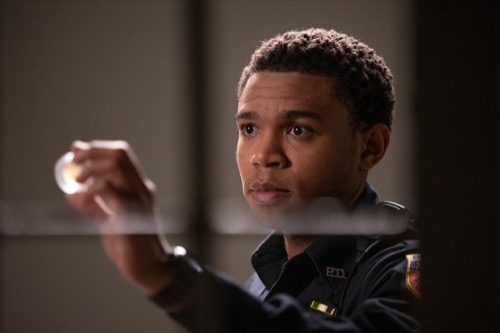 Meanwhile, Helen attempts to replicate Piper’s powers for herself, and Benny struggles to earn back Jo’s trust before it’s too late.”

Helen is having lunch with Emily. Helen says they are both innovators and mothers of the evolution, and they are going to help each other. Helen wants what Piper has. Emily says she can talk to chief Evans and maybe she will adopt her. Helen says that she wants Piper’s abilities, in fact, she wants her to expand on them. Emily says that sounds great, then she takes a butcher knife from the table and slashes Helen’s throat. Blood comes out of her neck, but then it heals immediately. Helen tells Emily that if she fails, the same knife will end up in her throat and she is sure she is more of a bleeder.

Jo walks into the kitchen, Ed and Mia are trying to get the bracelet off of Piper’s wrist. Piper says she feels different, fuzzy. Piper tells Jo that Benny can help, he is like her. Jo calls Brooks at the bureau, but someone else answers. Jo calls Chris and asks her to check something for her.

Jo arrives at the station, Brooks is missing. Jo goes into the cell to see Benny, she asks him how many of them there are, he says there could be thousands. Jo sits down and asks Benny what he does know. Helen is looking for a device, they stole it from a defense contract. It is a power source, like a powerful battery that Helen will use to upload data, and then they are all gone, including Piper. Benny tells her that she has to stop it, he was programmed to do this, including kidnapping Piper. He says he is not the person she thinks he his. She says he is not a person at all.

Chris tells Jo that the FBI is raiding Brooks’ apartment. Jo gets a call from an unknown number that tells her to go to the hospital, room 220, then hangs up.

At the hospital, Jo goes to see Dr. Abby, who tells her that they have Brooks and he came in as a John Doe. The two see the FBI in the corridor, Dr. Abby says she will stall them as long as she can. Jo helps Brooks out of the bed, Walter helps Jo get him down the hallway and out of the hospital before the FBI sees him.

At the station, Brooks tells Jo that he should be dead. Someone saved him, and he has an idea that he knows who did it. Brooks and Jo go to see Benny, Brooks tells him that he saw Helen there last night. Benny wants them to let him out of prison, he says that he is close to Helen, he can help.

Emily is working at her computer to try and replicate the code that she made for Piper.

The FBI just showed up at the station looking for Jo, she wants to hide him, he says no, he is not going to run from the FBI for the rest of his life. They are in a room alone, Brook kisses Jo, she kisses him back. She tells him that he is being really dramatic about the FBI. She tells him not to disappear again, then he leaves the room and goes with the two FBI guys.

Brooks is being interrogated, a man from the department of justice comes in and takes over. The guy tells him that the case is closed, he can go home. He got him a new gun, badge, and car – then he asks who is his friend. Brooks is surprised, he can’t believe he is free to go.

Outside, Brooks dumps the cell phone and keys in the garbage and hails a cab – he is being followed.

Jo is at home and she hears someone outside the house, it is Brooks, he tells her he can’t stay long, he is being followed. Ed comes downstairs and asks her what is going on, she says nothing. Brooks and Jo go into the garage to speak, he tells her that she could be in real trouble. Brooks asks her if she dumped a car in the ocean. She says yes and smiles. They kiss again. Jo says she thinks they should let them follow him.

Brooks is followed by Helen, or so they think it is Helen but is actually Larissa, the woman who made Helen. Jo and Brooks have a gun on her. Joe tells her that they want to know everything. Eighteen years ago they intercepted a transmission of unknown origin, the two top suspects where China or Russia. She says she works for the same government like them. They assumed that the information on the transmission was instructions on how to build a weapon, they were wrong.

It was instructions on how to build an AI. It was a success, up until the day it torched their lab, all the source code, and murdered her entire team, all because they found out that it was building its own AI. She has an offer for Brooks and Jo, she tells Brooks that she is the reason he was released from the FBI. She built a device and it can get rid of Helen, she is willing to share it with them, in exchange for the disk that she is assuming has Piper’s code.

Emily is still working on the code, she finds the power source. At the station, Chris says that his phone just came back online. In the cell, Benny is being lifted, it sees from gravity – it is the upload. Piper is also affected, she is at home, she tells Ed and Maya that it is starting.

Jo let Benny out of the prison cell, Jo tells Benny that Chris tracked his cell phone to an island and she thinks Helen is there.

Jo and Brooks meet up with Helen. Then Helen removes the chip from Justin’s neck.

Benny is back in jail. Piper is feeling better, just lying on the couch. She tells Alex that Jo is in trouble, they have to go help her.

Brooks and Jo find Helen, they try to shoot her and she turns into dust. Then, the dust collects and turns back into Helen. Brooks and jo run, they lock themselves into a room and think they

are safe from Helen, but then Jo heads a strange noise and the lights go out.