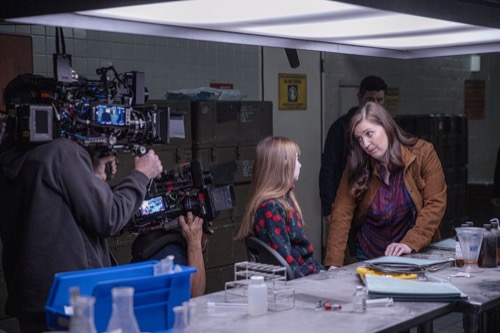 With Helen’s mysterious plan nearly realized, Piper recruits an unexpected team of allies to find them before it’s too late.”

Jo and Brooks were in danger. Helen was after them and she was more dangerous than before. It seems Helen got an upgrade from Emily. She can now break down her own human form into a swarm of nanobots and then put herself back together again. She was like the Terminator in a sense. Helen also wasn’t going to stop until she gets what she wants and so the kill shot might not even be enough to end her now. Jo and Brooks had no way of escaping Helen. They were still trying to figure out a way off of Plum Island when the unlikeliest group of saviors came to their aid.

Chris came. He brought along with him Alex, Benny, and Piper and they were all going to die. No one had a plan. They didn’t have weapons either and so it had looked like they were all vulnerable to Helen. The same Helen that was hunting them using her nanobots. Helen released her nanobots into the building and they were swarming the place. One of them had even gotten into Jo’s arm. It climbed its way from her arm to her neck and thankfully Brooks was able to cut it out before it could kill Jo.

The only place the nanobots couldn’t get into it was a test lab where this group of people chose to hide. The saviors didn’t know how to save the day and neither did Jo nor Brooks. They were all at a loss. They were hiding when Jo revealed the kill shot. She told everyone how it was supposed to stop Helen and that they needed to get close enough to deliver the kill shot directly into Helen. Jo couldn’t do it because she would die if she tried and so that left Benny. Benny begged for the chance to prove himself.

He said he’d deliver the kill shot. He promised to be on their side this time and he wanted Jo to hand him the kill shot, but she couldn’t do it. She couldn’t trust him. She was still weary after the last time he betrayed her and so she wasn’t going to put their best chance at survival in his hands. No sooner did she tell him no that Benny staged a diversion. He set fire to one part of the room and then escaped with the kill shot when no one was looking. Jo didn’t realize what had happened until afterward.

That’s when she left the safety of the room to go after Benny. Jo eventually found him trying to catch Helen’s attention and she demanded the kill shot back. Jo thought Benny was going to abuse it when he wasn’t. Benny explained how he was the only one that could get close enough to Helen to kill her and he also asked Jo to hide. She did. She then watched from the background as Helen came and Benny did as he promised. Benny used the kill shot on Helen. It just wasn’t enough to stop her and so Helen killed Benny.

Jo had tried to save him. She was doing everything possible to stem the bleed when Chris came and found her. Chris was the one that told her Benny was gone. He also reminded her that they needed to get out of there and so they went back to the rest of the people where they found Alex and Brooks had been attacked by Helen. Helen made herself appear like Jo and she got close to the guys in order to get her hands on the power source. And once she had it, she left them and went to go make herself even more powerful.

Only Piper went after Helen. She and later Jo was able to kill Helen by bringing her into direct contact with the power source. It killed her, but it was inadvertently broken by her as well. The power source was proving to be unstable and it would have created a blast that would have killed millions. Piper could see that. She also left their home earlier with no plans of ever coming back and so Piper sacrificed herself. Piper created a bubble around the power source and it protected everyone else even as it put herself at risk.

Piper stopped the power source from getting out. She sacrificed herself and everyone including Jo had thought that was the end of Piper, but Alex had an idea. They still had the disk with Piper on it and Helen’s body is more or less a shell. It could become anyone and that meant it could become Piper and so they used the disc. They uploaded Piper and she turned the shell in a replica of herself. She’s made up of nanobots now as well. She could become anyone she wanted and she and Mia were later going to play around with that until Jo put her foot down.

Jo told them that Piper isn’t allowed to change her appearance. Jo just wanted Piper to be herself. Piper was back to being a happy kid and she also said she thinks she knows how Helen was going to heal Ed. She still needed some time to think about it, though. Jo was also making moves. She wanted to pursue things with Brooks and at the same time she didn’t want to let go of Alex. Alex accepted the job offer. He even found a place to stay and it had room for Mia. And so the only way to get him to stay was if they were going to try again and unfortunately Jo wasn’t sure if she wanted that.

And while everyone thought Loretta and Michael Denman were in the past, those two still had a device connected to Helen and they pressed a button that was supposed to wake her up.

And miles away Piper opened her eyes.