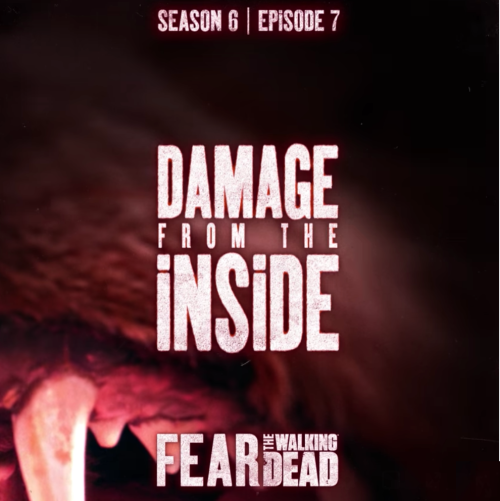 On AMC tonight Fear The Walking Dead (FTWD) airs with an all-new Sunday, November 22, 2020, episode and we have your Fear The Walking Dead Recap below! On tonight’s FTWD season 6 episode 7 fall finale called, “Damage From The Inside,” as per the AMC synopsis, “Strand sends Alicia and Charlie on a mission to look for Dakota.”

Ginny’s rangers are driving and on horseback. Strand and Dakota are in the truck alone, she tells him they could run away, now is the time to do something. They stop when they see a horse without a rider, it is Terry’s horse. Strand goes ahead, Strand calls Terry on the radio and he doesn’t answer. All of a sudden, six more horses come running down the road with no drivers. Strand continues on and finds that the riders are all dead and started to turn.

Alicia and Charlie assist in looking for Dakota. Alicia wants to find the people who continue to sabotage Ginny, and she thinks that Dakota might be able to tell her more about them. Alicia discovers a mutilated walker and a hunting lodge called Buck’s Landing. She tells Charlie that she is going inside and asks her to keep a lookout. It appears that the person who owned the lodge is a taxidermist, who has many corpses throughout the building. Alicia fiends a sort of Frankenstein room where a walker is strapped to a table. All of a sudden, Alicia is knocked out with a needle and taken prisoner by the taxidermist.

Now Alicia is strapped to the table, she manages to get loose, find a weapon and when she hears someone at the door, it is Dakota. The taxidermist comes into the room. Dakota says that he saved her, his name is Ed. He asks if either of them are chess players. Then we see him play chess with Dakota while Alicia watches, and they play music on the record player. He tells them that he used to come to the lodge with his wife and daughter, Emily. Alicia tells Dakota that they should be leaving, Dakota says she is not going anywhere. Alicia makes an excuse that she needs a blanket, she runs into Charlie who tells her that there is no way out.

Ed finds Alicia snooping, she tells Dakota that he has the whole place locked up, she says she doesn’t want to leave anyway. Alicia informs him that he has to let her go, she is Ginny’s sister and she will come looking for her. He says they can go, but it is better to leave in the daylight. Alicia tells Dakota that the walker he was working on was a ranger, they need to leave there. Dakota says when she found this place she was happy to be away from her sister and she can’t go back there. Alicia asks if Ginny killed her parents, Dakota says yes, but she doesn’t know why.

Alicia is now in a room alone, she finds some equipment and uses it to call Ginny. She answers, Alicia says she is with Dakota. She says she will bring Dakota to her, but she wants a fresh free start with Charlie. Ginny says they have a deal.

Ed plays music full-blast which brings in the walkers. Alicia asks what he is doing, he says bringing back his creations. Ed tells him that his father was a taxidermist and he couldn’t understand why his father did that, but he understands, it is preserving something in its perfect state. He goes on to say that Ginny and her rangers killed his wife and daughter, and he should have done more to protect them. He pulls out his gun and orders the girls to go upstairs.

Charlie manages to drug Ed and he is asleep, she has the keys. Alicia tells her they lower the music, wait until they clear out and they go. Ed catches them and tells Alicia you have to hit a vein. He says that Alicia is one of Ginny’s believers, she set the radio to their channel. There is a scuffle and Ed is knocked out. The walkers hear the commotion and try to get inside. Ed is awake but he is hurt, he tells the girls to go. He speaks to Alicia, he tells her that Ginny didn’t kill his family, he did, it was his fault. The door breaks and the walkers come in, Ed looks straight at them and welcomes them with a smile and open arms, they eat him.

The girls are upstairs watching the gruesome scene, some of the walkers are leaving. Alicia goes downstairs to kill some and Morgan arrives just in time to continue killing the rest and save the girls. Morgan hugs Alicia, he tells he came because he heard the music. He tells them that they should get on the road before Ginny finds this place. He found a place, Al and Dwight are there and pretty soon everyone will be there.

Morgan tells Alicia that he wants to get everyone back, in order to do that, he wants to trade them for Dakota. Alicia figures out that it was Morgan that attacked the convoy. She asked if he blew up Tank Town, he says no. Alicia is against Morgan trading Dakota for their people. Morgan tells Alicia he can’t let her walk out the door, he has done everyone he has done for them all to be together and he will do anything for that to happen. Then he tells Alicia that Dakota is welcome.

Strand arrives, he sees Dakota and tells Alicia that he knew he could count on her. Morgan comes out and tells Strand it is good to see him. Morgan tells him he has a safe place. Strand pulls his gun, Alicia tells him that Dakota is not going back. He puts down his gun and tells them that he won’t be able to protect them. Morgan, Alicia, Charlie, and Dakota leave.

Strand returns to Lawron, Ginny asks where is Dakota, is she safe. He tells her that Dakota is safe, but she is with Morgan, Alicia, and Charlie too, but he is on her side.

Ginny brings Strand into a room where he sees Grace, she is pregnant. He turns to Ginny and asks who does she want next. She says, everyone.