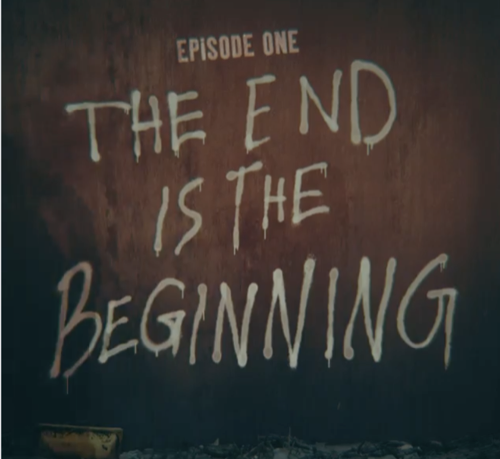 On AMC tonight Fear The Walking Dead (FTWD) airs with an all-new Sunday, October 11, 2020, episode and we have your Fear The Walking Dead Recap below! On tonight’s FTWD season 6 episode 1 premiere called, “The End Is The Beginning,” as per the AMC synopsis, “Morgan must decide whether to help a desperate stranger while a bounty hunter stalks him.”

Can you believe FTWD Season 5 finale is already here? Don’t forget to bookmark this spot and come back later for our Fear The Walking Dead recap between 9 PM – 10 PM ET.  While you wait for the recap, don’t forget to check out all our FWTD news, spoilers & more, right here!

The show opens up with someone spray-painting THE END. The mysterious head hunter, Emile, has a visitor to his camp, Walter, and it doesn’t take long for him to behead him. Virginia calls him and says she has a job, he puts the head in a “Walter” labeled box and tells her he has to deliver it to Gavelston. She goes on to say she is looking for Morgan Jones, she doesn’t know if he is dead or alive. Emile tells her she will know soon. Emile gets ready to leave and we see a box labeled, “Morgan Jones.”

We see Morgan, his eyes are bloodshot and he is held up in a car. Someone shoots and the bullet goes through the window of the car, Morgan ducks just in time. A group of four pass the car on horseback, Morgan goes unnoticed. Morgan gets out of the car and a walker comes right up to him and goes to pass by, Morgan tells him that he is right there and when he turns around, he kills him; but it takes a lot of strength for Morgan to do so, he is in bad shape. Morgan climbs up a water tower, goes inside where he has a sort of loft built.

Morgan heads out and is visibly in very bad shape, he is suffering from the gunshot wound from the shootout in Humbug’s Gulch. He goes to look into one of the town windows and slips, he falls to the ground and tries to grab a weapon when a man named, Isaac shows up and pulls Morgan away. But, little does Isaac know yet, the walkers don’t even pay Morgan any mind anymore. Isaac asks him how long he has been hurt, Morgan says six weeks, he lost track of time. Morgan tells him that the person who did this to him is still looking for him and he doesn’t want to be a part of that. Morgan tells him that he doesn’t want to get to know him. Isaac is worried that he smells gangrene. All of a sudden, the head hunter shows up and he shouts out for Mr. Jones, tells him he wants to have a little chat.

Isaac gives himself up to the head hunter who shows him a drawing of Morgan, Isaac claims to not know or have seen him. Emile is with a dog who is very intrigued with the door, he asks Isaac if someone is inside, he says no. The dog finds a blanket that belongs to Morgan. Isaac says the owner of the blanket is dead, taken by walkers. Emile starts to break up a chest with his ax, Emile tells him to stop because he is going to attract more walkers. Emile leaves. Afterward, Isaac fights his way out of the building through walkers and notices Morgan laying face down on the ground.

Isaac brings Morgan back to the water tower, he found the coordinates in his clothing. Morgan gives Isaac a gun, then tells him to leave. Morgan asks Isaac how he knew his name, he says he saw a tape he made. Isaac loads the gun and points it at Morgan, he tells him he is running out of time and doesn’t have many options left. All of a sudden the tower shakes and falls down. The head hunter found Morgan. Emile gets out of his truck and tells Isaac that he lied to him. Morgan pulls a gun on Emile, Isaac tells him to shoot him. When he does, the two make a run for it in his truck.

The two drive for a while and find some trees down. Morgan gets out of the truck and says he is going back, the tower is the only reason why he is still breathing. Morgan tells him that someone saved him and patched him up, left him a message, “you don’t know me, but I head your message – you need to do the same, you still have things left to do.” Isaac tells him that where he is going, where his wife is, it is safe. Morgan agrees to go with Isaac, they leave the truck and go on foot. Turns out, Isaac was one of Virginia’s rangers. They arrive at an empty water dam, Morgan goes straight through since the walkers don’t care about him. Isaac has to take a long way which is another few days.

It doesn’t take long for Morgan to collapse to the ground, a walk bends down to bite him and Isaac shoots it. Morgan is back up, he sees the walkers going towards Isaac and tells them he is right there, to get their attention off of Isaac. Morgan goes into fighting mode, draws some wild energy from deep down, and begins kills the walkers with Isaac. They kill all the walkers and are able to walk through the dam wall, on to the other side. They arrive at a makeshift house and Isaac’s wife, Rachel, she is very pregnant and her contractions are just a few minutes apart. Isaac tells Morgan that nobody will find them where they are, because on the map it is a lake, people don’t know that it dried up.

All of a sudden, they hear some noise. Morgan says he is going to go see who it is, it is probably the head hunter. Morgan tells Isaac to promise to find his people and bring them there where they can be safe. Emile calls out for Morgan, then he walks up to him. Morgan gives himself up and asks Emile not to touch Isaac or his wife; he says to consider it a deal. Morgan gets down on his knees, Emile tells him that he won’t even feel it. Isaac comes out of nowhere and attacks Emile, then Morgan does as well. Isaac shows Morgan that he was bitten, then Emile gets up and starts fighting again. As Emile goes to behead Morgan, he stabs him with his spear, then he beheads the head hunter. Isaac hears the baby cry, Morgan tells him to go meet his kid.

Emile’s dog is licking Morgan’s head, he wakes up to find that the bullet has been taken out of him. Rachel is there cuddling her baby, it is a girl, they named her Morgan, it was Isaac’s idea. She shows him Isaac’s grave, he tells her that he wouldn’t be there if it wasn’t for him. Morgan goes to find Emile’s head, which is still in a walker state, he finds a key on a chain, picks it up. Then he takes his spear but throws it to the side when he sees Emile’s ax. A walker comes up to Morgan, he kills it with the ax. All of a sudden, we see Virginia and her rangers, they stop at a blockade of walkers dead bodies and she comes out and smiles when she sees the box labeled Morgan Jones.

She looks inside and sees Emile’s head inside, she starts to laugh. She gets on the radio and says if you are there, listen and listen good, I thought you needed to be dead for this work – but you don’t, because they will think you are and if you try to convince them otherwise, I will add them to this pile of bodies one by one. Then Morgan comes on, says Morgan Jones is dead and she is dealing with someone else now. From afar, Morgan watches as Virginia and her rangers leave.

We see the guy spray painting again, he continues – the end is the beginning. There are two men there, the other one mentions the key, they are waiting for it.