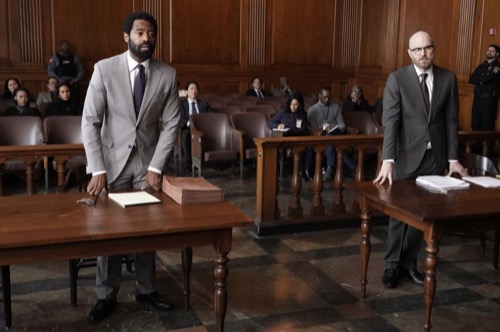 Tonight on ABC their new legal drama For Life inspired by the life of Isaac Wright Jr. airs with an all-new Tuesday, May 12, 2020, episode, and we have your All Life recap below.  On tonight’s For Life season 1 episode 13 finale “Fathers” as per the ABC synopsis, “When Maskins and Cyrus Hunt try to thwart Aaron’s attempt at a retrial, Aaron is forced to attempt a desperate move, risking the wrath of a powerful new adversary. The election comes to a head as Safiya tries to warn Aaron that he is now a marked man.”

Cyrus Hunt is the new warden. He also hates Aaron Wallace. He knows it was Aaron who ensured he lost his job the first time around and so now Hunt wants to sabotage Aaron. He wants Aaron to lose his chance at a retrial. Hunt has been monitoring what Aaron does and who he sees. He then passes on the information to District Attorney Maskins. He even gave Maskin’s a video of Aaron being involved in the riot. Hunt is willing to do anything to take down Hunt and unfortunately, he now has allies because he wishes to do so. He has Maskins in his corner as well as O’Reilly. He also has the Governor on his side because it was the governor that changed the judge on Aaron’s case. He went from a lenient judge to Judge Reginald Cummings.

Cummings has tried another case in which Aaron was involved. Aaron had made several mistakes back then and Cummings had taken him to the task. He accused Aaron of being unprofessional. He told Aaron that he shouldn’t be a lawyer and so seeing the judge again was the first time they’ve seen each other since that one case. Aaron, therefore, knew he had been screwed when he saw his new judge. He would have liked it if he could have waited for a new judge and yet he couldn’t do so in this case. He needed his retrial as fast as possible. He wanted his freedom and he couldn’t wait for justice to finally come.

Aaron had made enemies at the prison. It wasn’t just Hunt that hated him. Dawkins hated him too. Dawkins wanted to kill Aaron because he believed Aaron to be a rat and so he could still tell other people at the prison what he believed. It would ruin Aaron’s reputation. There would be a target on his back and Aaron wouldn’t be safe. Aaron was warned by Masry that he needed to transfer to a new prison. Aaron later put in the paperwork to do just that and he was applying for a transfer for Jamal. He knew what Jamal did for him. Jamal pretended to be working for Dawkins in order to get his hands on his shiv and he went on to use that shiv on Dawkins himself.

Jamal did it to protect his friend. Aaron wants to reward that loyalty by protecting him now and he managed to have a few words with Jamal. He told Jamal to claim he acted in defense of someone else. It was the truth and it would help Jamal beat the new charges. Jamal was going be charged for starting the riot. He made several enemies along the way and so Aaron was trying to protect him. He wanted them both to get transferred to a new prison. One in which they didn’t have to worry about the warden actively working against them and where they would finally be safe. Aaron was doing all of this as he was preparing for trial.

Aaron attempted to call his former clients as witnesses. He made his case to the judge and both the judge and O’Reilly shot him down. They said three cases didn’t show a pattern in the Bronx District Attorney’s office. The judge refused to let him call his initial witnesses and so Aaron came up with someone else. He was going to call the girl who overdosed at the club. His daughter Jasmin had dug up dirt on her and they were going to say it all in court. They were going to tell the world that this girl was using drugs long before she snuck into Aaron’s club. And so Aaron was going to ruin the young wife’s life, but right as he was about to, he had a change of a heart and he talked to her father.

Spencer Richardson is an important man. He was rich, he was influential, and he used his ties to get Aaron arrested. He blamed Aaron for his daughter overdosed. She did so at Aaron’s club and she was later dumped outside of a hospital because no one at the club had bothered to call 911. Richardson had called his friends in the District Attorney’s office when his daughter overdosed. He later said Maskins arrived an hour after the phone call and Maskins had promised to make everyone responsible for the overdose pay. Maskins upheld his promise. He put Aaron away because he said Aaron had been a drug pin and so Richardson rewarded Maskins for keeping his promise.

Richardson endorsed Maskins. He endorsed for District Attorney and Attorney General. He’s made several donations to his campaigns and his friends have all made donations. Richardson basically made Maskins’s career. Maskins owns everything he has to Richardson and so that’s why he went after Aaron. Aaron proved that in court and his evidence eventually granted him a retrial. He won his first step to freedom. This sadly caused his enemies to become even angrier. Richardson had heard what the judge said and it made him realize he might have cost a man his life. He then became so upset that he demanded this case go away. He asked Maskins to pull strings again and Maskins could do it because he won the election.

Maskins is now the Attorney General. He beat Masry’s wife and this caused some problems in Masry’s marriage. Her wife blamed her for losing the election. She said if Masry hasn’t tried to defend Aaron or wen through with her reforms then maybe she could have won. Except Masry’s marriage woes paled in comparison to Aaron’s troubles. Aaron was later visited by Maskins. Maskins threatened Aaron’s family. He threatened his friends. He told Aaron he either stops going after him or he was going to ruin his life. He also demanded that Aaron drop the retrial and Aaron couldn’t do it.

Aaron knew he was innocent. He now wants to prove it and unfortunately, Maskins followed through on his promise. Aaron’s transfer was delayed. He was now in prison with a bunch of people who hated him.

And so he could die at any moment.