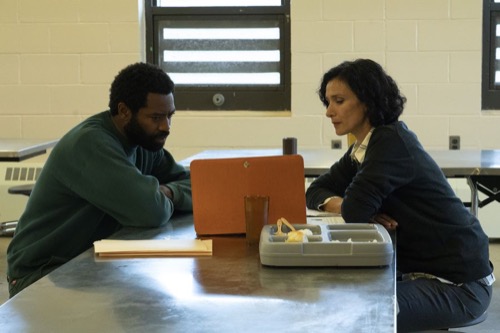 Tonight on ABC their new legal drama For Life inspired by the life of Isaac Wright Jr. premieres with an all new Tuesday, February 11, 2020, episode and we have your All Life recap below.  On tonight’s All Life season 1 episode 1 “Pilot,” as per the ABC synopsis, “The premiere of the series about Aaron Wallace, an incarcerated man who becomes a lawyer. In addition to litigating cases for other inmates, he fights to overturn his own wrongful conviction. His struggle and his complicated relationship with progressive female prison warden Safiya Masry explore the flaws in the penal and legal systems.”

Aaron Wallace was serving a life sentence for something he didn’t do. He once owned a club an he was accused of bringing drugs into it. Only he didn’t do that. He didn’t bring drugs into his club and he wasn’t distributing it. It was his supposed friends that were doing that. They did it behind his back and Aaron was still held responsible. He was offered a plea agreement in which he would have served twenty years and he had turned it down. Aaron had believed he could fight the charges in court, but unfortunately it didn’t matter to the authorities, he was still sentenced to life and now he was prisoner.

Aaron didn’t waste his time in prison. He found an online college and he gained a degree. He also received sponsorship from a notable person who helped him to get accredited. Aaron then passed the bar and now he’s a lawyer. He was representing prisoners. He wanted to use their cases to help bring down the ADA that sent him to prison. He believes that in turn will help his own case and so Aaron was eyeing his way to freedom. He wanted to return to his family. He hadn’t seen his daughter Jasmin in a while because she’s been staying at home and his wife had moved on.

His wife was now with Darius. His former best friend and his wife were in a relationship and were living together. Aaron wanted them both to be strict on his daughter. Jasmine’s grades have been slipping and she dropped one of her extracurriculars. Aaron told his ex wife to keep a closer eye on her. He asked if she couldn’t do it then Darius should. It started a whole thing with her. Marie reminded him that he could have gotten out if he had just taken the plea deal and she even said she would have waited for him.

Marie still loves him. Her daughter knows that and so does Darius. They both made their peace with it and they both know its not going anywhere. No one believes Aaron is getting out. He was the only one that thought it was possible and he worked on it by working on the other cases. His first case was defending a young man accused of statuary rape and drug dealing. The ADA said this young man had given his underage girlfriend drugs and that she OD on them. But the truth is that the girl purchased the drugs herself and that she tried to kill herself when her boyfriend broke up with her.

The girl had been threatening to do it. She kept calling her ex-boyfriend and demanding that he get her drugs. He kept coming up with excuses and so she got the drugs herself. She then lured him to her house with sex on offer. Which he took. He then fell asleep and when he woke up he found her unconscious. The guy called the police and the girl was saved. Her family on the other hand had wanted someone to blame and so they came to blame the ex-boyfriend. He was eighteen to the girl’s fifteen. It was already a crime there and so the ADA stacked on charges.

Its what the ADA does. He stacks charges against people who can’t afford a good attorney and who don’t have the power to push back. Its what happened to Aaron. Its what happened to his client and everywhere he turned Aaron kept hitting a roadblock. He had been very vocal against the District Attorney of Bronx. He said Glen Maskins had a hidden agenda. He accused the man of being corrupt and as it happens that same man was in the running for Attorney General. He was running against the Brooklyn DA who also happens to be the Warden’s wife.

The same warden who was warden of the prison Aaron was in. He was also the Prisoner’s Rep and so he actually has a relationship with the Warden. He reports what the guards are doing to her. He talks to her regularly and she told him how he shouldn’t have gone after Maskins. Maskins was going to make the connection between her prison and her wife’s career. The warden didn’t want that to hurt her wife. She also knew Maskins would be vindictive and he was. He got to the guards who made sure Aaron was late for court.

The DA also moved around witnesses which made it harder for Aaron to pursue his case. There were also witnesses that changed their story completely and so Aaron decided to fight back. He knew he wasn’t fighting a fair battle. He therefore used dirty methods like forging a suicide letter. He then had the letter sent to his client and so that opened up a pathway. He told the judge that he needed to question the girlfriend. Its been six years. She needed to tell the court what happened between her and Jose Rodriguez.

Aaron leaned on Molly. He used the fake letter to get her admit that there was a real letter and that parents destroyed on the day she went to the hospital. Her parents didn’t want to see her get arrested. They thought they were protecting and instead they sentenced an innocent kid to jail. Aaron go Molly to admit she lied about everything. He also got Jose off and so now the kid is free to live his life even as Aaron returned to prison. Aaron earned a rep. He received paperwork from other prisoners that wanted him to represent them and he also received a visit from the warden.

The warden wanted him to cool down. She told him that things would be worse if Maskins wins the election and so she wanted him to stay under the radar until the election was over. She said it would better for everyone, but really it put him back in his cage. Aaron later received a visit from his daughter Jazz and he was so happy to see her that at first he didn’t see that she was pregnant. Jazz has been hiding her pregnancy from him because she didn’t want him to be upset. And he assured her that he wasn’t upset with her.

Aaron loves his daughter and he told her as much. He found out he was going to be a grandfather and that pushed him into taking cases again. He wasn’t going to play the long game like the warden wanted him to. He wanted to return to his family and so he was going ahead in his fight against Maskins as well as the ADA that put him behind bars.