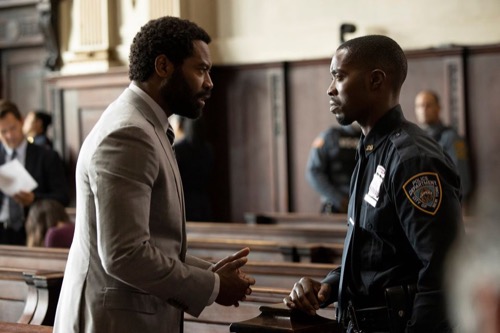 Tonight on ABC their new legal drama For Life inspired by the life of Isaac Wright Jr. airs with an all-new Tuesday, February 25, 2020, episode and we have your All Life recap below.  On tonight’s All Life season 1 episode 3 “Brother’s Keeper,” as per the ABC synopsis, “Determined to gain access to his police file, Aaron decides to represent an inmate from Safiya’s drug rehabilitation program whose brother is a cop.

Aaron Wallace has a new client. He was representing Hasan and he was helping him with more than simply his trial. He was there for the man as well. Hasan became a new man in prison. He got clean and he was now assisting his fellow prisoners with getting clean as well. Hasan getting clean is the reason why he was second-guessing his plea agreement. He was drugged out of his mind when he accepted it and it was much too long for someone like him. He wasn’t in the right state of mind when he agreed to take a plea deal. He didn’t know where he was or who was representing him and so Aaron has been helping him piece the events of that night back together.

Aaron also believed the best way to defend him was to argue his client’s mental state. He called upon Hasan’s brother to testify. The brother was a cop and he had first-hand knowledge of Hasan addiction. Hasan was once so high that he stole the dialysis machine from their dying mother. It had been the brother that later took her to the hospital and he was forced to bury their mother alone after Hasan was sent to prison. The brother didn’t really believe Hasan turned his life around. He doubted his brother’s sobriety and he even doubts Hasan’s conversion. Hasan converted to Islam when he got to prison.

His new faith helped him to get clean. He now believes in a higher power and he wants a chance at life. Only his brother didn’t really believe him. He was only testifying in Hasan’s defense now because he figured that’s what they mother would have wanted to do and so he spoke in open court about Hasan’s addiction. He said his brother was detoxing so bad he couldn’t tie his own shoes at the time of his arrest. Hasan’s mental state was impaired and so the judge took into considerations. Aaron also spoke to the brother alone. He knew the brother was a cop and he wanted the man to look into his files.

Aaron’s police file has been denied to him for the past nine years. The ADA said there was a new witness in the case they had to protect and Aaron knew it was a lie. He knew the ADA came up with it to keep him in prison. Aaron became so enthralled in his own case that he failed to properly represent Hasan. He only called the one witness and the witness was bias at that. He should have called upon a doctor and Hasan’s previous attorney. There were plenty of avenues he could have taken and he didn’t. He failed to represent Hasan to the best of his abilities. He was called out about it by the judge later on and Hasan’s motion failed.

Hasan is still in prison. He also suspected Aaron didn’t do his best for him and so he pushed Aaron away. He thought Aaron was only out for himself. He also noticed when Aaron spoke to his brother alone and so that changed how Hasan saw his attorney. He no longer trusted Aaron. He pushed him away and that only made Aaron fight for him harder. Aaron let go of his own case. He instead focused on his client and he tried to find a new angle to represent him. Aaron was doing this while his ex-wife Marie was being hauled into the District Attorney’s office. The DA wanted her to testify against Aaron in a forgery case.

They knew he forged a letter to get it into court. The District Attorney of Bronx wanted to tear him down any way they could and they were hoping Marie, but she gave them nothing. She still loved Aaron. He was her husband and the father of her child. She wasn’t going to be betraying him anytime soon. Not for the crooked DA or for her boyfriend or for her friend. She was going to protect Aaron and so the DA let her walk out. He didn’t really have a case anyway. Aaron was safe from him and his chief problem was probably the Warden. The Warden was informed about the forgery.

She was going to keep a closer eye on Aaron now. He just didn’t know it because she pretended like everything was normal and so he continued on with his case. He came up with a new strategy and he convinced Hasan to take another chance on him. Together the men came up with an ineffective counsel clause. They showed how Hasan’s previous lawyer failed to investigate the scene and that Hasan was overcharged. He stole copper wire from a building. The owner had died six days before the theft and technically that meant his dwelling was abandon which was what Hasan had assumed at the time.

There was no way he should have been given fifteen years in what should have been a three to five-year sentence. Aaron proved that to the best of his ability and Hasan got to speak to his brother one on one as they were waiting for the judge to come back with his ruling. It was the first time the brothers got to speak to each other in years. Hasan’s brother was proud of him for getting clean. The brothers talked and they were going to work on their relationship. It also sadly had no bearing on Hasan’s case. The judge again denied him his motion and so Hasan was going to stay in prison. There was nothing Aaron could do about it.

Aaron later heard from a friend what happened with District Attorney. He contacted Marie and she told him everything she faced. Marie was fine with it. She was just glad to know that Aaron still had his secret cell phone. Aaron was now aware of how bad things were and he thought about doing Warden a favor.

Aaron found out how drugs were getting into the prison and he went to the Warden to report it.

While he was there, the Warden confronted him on his forgery. She told him that there was a line he shouldn’t cross and he told him he had to cross that line to sometimes do good things. Hasan’s judge kept him in prison to prove a point to Aaron. Aaron mentioned that was the sort of thing he had to fight every day and so the Warden back down. She was also later grateful when Aaron shared with her knowledge about the drugs in prison. And so they were good again.

Aaron also got to see Marie and she brought his arrest file with her.

It turns out Hasan’s brother came through and so Aaron is one step closer to his freedom.