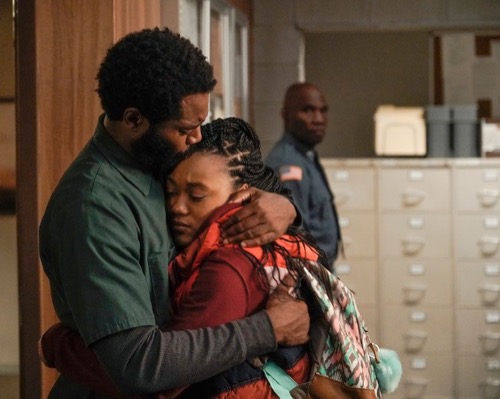 Tonight on ABC their new legal drama For Life inspired by the life of Isaac Wright Jr. airs with an all-new Tuesday, March 17, 2020, episode and we have your All Life recap below.  On tonight’s All Life season 1 episode 5 “Witness,” as per the ABC synopsis, “While litigating on behalf of an inmate locked up on a robbery charge, Aaron is torn between doing what’s right and what’s best for his case.

Aaron talks to a friend about how to prove that the authorities withheld witnesses from him in his case.

A correction officer named Smitty is questioned about drugs in the prison by the female warden. He is holding back until he feels threatened. He then shares that he only holds the drugs for prisoners who are afraid they will get caught.

Aaron talks to a fellow inmate about eyewitness testified and how unreliable it can be. The inmate shares how he was picked in a line-up. Aaron explains how the police manage to manipulate eyewitnesses. Aaron wants to help the man. But the inmate doubts he can, he couldn’t get their friend off. Aaron explains that it was a long shot. But this one is a slam dunk.

Marie talks to Jasmine about anyone who approaches her. She tells her not to talk to anyone unless she is there.

Several prosecutors talk about Aaron’s latest case. One of them will go up against him. The other tells him to be careful, Aaron has a lot of fight. Later, in court, Aaron makes a solid point against a lawyer, getting the judge to rule in his favor. The lawyer leaves upset and scared after Aaron announces he plans to sue him in civil court in regard to eyewitness testimony.

Aaron learns that his client Rafi is guilty of another inmate. Meanwhile, the lawyer up against Aaron and his coworkers want to prove it wasn’t them but the police.

Marie and Aaron talk. She helps him with some information he needs. Meanwhile, a drug dog is brought through the prison on the warden’s orders. She pulls in an inmate to question him. She can make him comfortable if he tells her what guards are bringing in the drugs.

He asks for some time to think about it. He leaves. Aaron meets with the warden. He is upset because the others think it is him and he is going to get killed.

Aaron returns to the general population. Rafi asks him if he is a snitch. Aaron tells him no, but he knows he is guilty. Aaron is called to see a visitor, his daughter. The warden watches him talk to her in a private room. He’s soft, sweet, loving and tells Jasmine she needs to focus on her and her son. Not him. She shouldn’t worry about what is happening with him.

Marie is waiting for Jasmine when she gets off the bus. Marie promises to tell her what is going on from now on.

Aaron arrives at court to discuss Rafi’s case. He points out that the NYPD placed Rafi in two line-ups, each time he was the only suspect to appear. This manipulated the eyewitness. Aaron also points out that the lawyer didn’t have the authority to accept a plea deal. He asks for a bathroom break. While he and his lawyer are gone, Aaron’s CO mentions he never knew that about the line-ups.

Aaron is given an offer for Rafi and he has to bring it to him directly or he will be disbarred. He shows pictures of the victim to Aaron who becomes torn since he was already told that Rafi was guilty.

Aaron delivers the news to Rafi who wants out now. He doesn’t want to take any kind of deal. Meanwhile, the lawyer on Rafi’s case is fired.

The warden addresses the COs, toning down her approach and her hunt for illegal contraband.

Marie and Aaron text later. He wonders if she is all right. She says she is fine, asking about his case.

The next day in the yard, Aaron watches Rafi leave. Aaron looks as if he questions what he did.