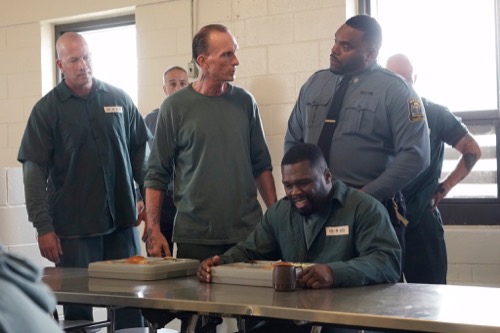 Tonight on ABC their new legal drama For Life inspired by the life of Isaac Wright Jr. airs with an all-new Tuesday, March 24, 2020, episode and we have your All Life recap below.  On tonight’s All Life season 1 episode 6 “Burner,” as per the ABC synopsis, “Aaron confronts O’Reilly in court, targeting the search warrant used in Aaron’s arrest and the DA’s failure to disclose a confidential informant.

Marie’s father comes to town, intent on encouraging her and Darius to solidify their relationship. Maskins arranges for a dangerous inmate, Cassius Dawkins, to be transferred to Bellmore in hopes that he’ll cause problems for Safiya and Aaron..”

Safiya watches the cameras in the prison, still looking to see who is mangling in the drugs. Aaron is in his cell looking for documents. He comes across proof that the cops had an informant. This person never took the stand in his case. Fos, A corrections officer, hands a paper bag in the yard to one of the prisoners. He tells him it’s clean.

Aaron text Marie. He tells her brought a break in his keys. She asks if they can talk.

Marie heads home to find her father at her house. He wants to know why she is still following Aaron and is involved since he’s behind bars.

Aaron is in court talking about how he is discovered there was an informant in his case. The file was sent to him via a whistleblower and that’s how he got his hands on it. Later, the prosecutor has to talk to his superior. He is nervous that Aaron has the file.

On his way back to jail from the court, the bus makes a stop. Aaron wonders why. The driver tells him they have to pick up a few people that appear to be well behaved. A man gets on the bus and it looks as if Aaron might know him.

Back at the prison, Safiya meets with the prisoner who appears to know Aaron. She is aware of his reputation and tells him to keep himself in line.

In the yard leader, Aaron meets the new prisoner name, Cassius. It looks as if he’s looking to run things and he has just arrived.

Darius is talking to Marie‘s father who gives him his late wife’s ring. He tells Darius he is the man for Marie and that he needs to get down on one knee. Darius reveals that Aaron is never signed the divorce papers.

At mealtime, Cassius speaks to Aaron, asking how he is allowed to leave to go to court. Aaron tells him he might want to move tables, the one he is at belongs to Wild Bill, a white nationalist. Just then Wild Bill shows. He tells him to move. Cassius starts to flex his muscles when the guard tells him to move.

Marie calls her father outside affairs he starts making problems, telling all of them they worry too much about Aaron who isn’t here anymore. He is sick of her still dealing with him. She tells him she isn’t turning her back on him ever.

Cassius finds Aaron. He wants to use his burner. Aaron plays dumb. Cassius just wants to make one call. Aaron tells him this one time. He calls in a hit on an inmate, making Aaron regretful.

An officer who Aaron knows is called in to testify. He swears under oath he didn’t give him the files. back at the prison, Aaron is threatened by the officer’s inmate brother. He is mad his brother had to perjure himself. He tells Aaron to stay out of his face.

Safiya talks with a political fight who is running. She is mad about Safiya’s suggested prison reforms and she won’t be able to run and win if Safiya doesn’t tone down.

Marie and the families say goodbye to her dad. He gets in the cab and asks to go to a prison upstate.

Cassius wants to use Aaron’s phone and he is willing to get Aaron in trouble if he doesn’t help him. After Aaron pushes back, he tells him he wants the phone altogether. Aaron’s friend pulls him aside after and tells him to give in. Cassius is crazy.

Marie’s father arrives to see Aaron. He has come along way to say something. He begs Aaron to sign the divorce papers. He is ruining her life and it is time for him to let go. Aaron tells him he can’t. Later, Aaron gives his phone to Cassius.

Fos, the CO, comes home to two men with guns in his house. They have his family tied up and a message from Cassius.