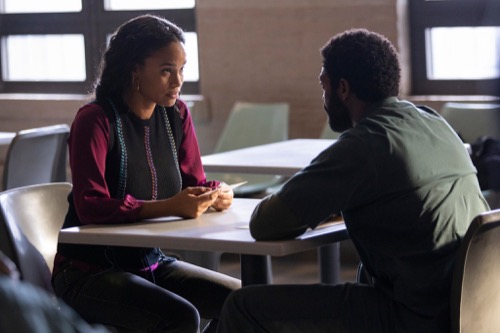 Tonight on ABC their new legal drama For Life inspired by the life of Isaac Wright Jr. airs with an all-new Tuesday, March 31, 2020, episode and we have your All Life recap below.  On tonight’s All Life season 1 episode 7 “Do Us Part,” as per the ABC synopsis, “Aaron struggles to balance the demands of his own case with the needs of an inmate who’s fighting for the right to marry his dying girlfriend. Safiya defies the prison board, effectively jeopardizing Anya’s campaign as well as their marriage.”

Aaron found a lead. He was pursuing the Angelo angle and he needed Darius’s help. Darius was still his friend. He was also the only one who visited the club a lot and so Aaron was hoping Darius could identify someone for him. He needed Darius to do it. He tried to use Marie and she reminded him that she wasn’t at the club that often. Therefore, Aaron’s only bet was Darius. He asked Marie to talk to Darius and he told her he didn’t have his burner anymore. He lost it. He also lost his phone privileges because he wouldn’t sit down to eat with Dawkins and unfortunately for him Dawkins had taken over the prison.

Dawkins controls everything now. Aaron couldn’t even talk to him because he was advised to let Dawkins calm down and so Aaron tried focusing on his case. He was minding his own business when Nathan approached him. Nathan was a fellow prisoner. He also wanted to marry his long-term girlfriend. She was dying from cancer and they didn’t have that much time together. They wanted to get married before she passed. Nathan put in the paperwork to marry her and the Warden approved of it. However, the Prison Board stepped in. They overruled the Warden and they denied him permission to marry Tricia.

Nathan needed help. His girlfriend Tricia has taken a turn and her doctor doesn’t believe she’ll survive a month. Nathan went to Aaron for help. He needed Aaron’s legal maneuvering to help get married and he was practically begging. Aaron told him there wasn’t much he could do. He hated to turn Nathan down, but he didn’t feel like he had any other choice. Aaron needed to wok on his own case first. He went over it with his friends. He practiced what he was going to do in court and Marie did her part as well. She talked to Darius for him. Darius also agreed to speak to a mutual friend named Michael.

Michael had taken a plea back in the day to testify against Aaron. Both Marie and Darius tried to tell him he owed Aaron and they were working on him as Aaron spoke with Roswell. He updated Roswell on the situation at the prison. He told him a new intimate was making a power move and that he just needed to ride out this week. Aaron also noticed Nathan while he was speaking to Roswell. He felt bad about turning the man and Roswell told him to take the case. Aaron didn’t believe he should because it might spread too thin. And so Roswell reminded him that pro bono means “for the good”.

Aaron went to go find Nathan after that. He found Nathan making tapes for his girlfriend and he interrupted him to tell him he pushed for a motion for Nathan. He had a hearing this week coming. He can finally tell the world what Tricia means to him and maybe they’ll be forgiving. Nathan was in jail because he was driving drunk from a party and on an expired license. Nathan deserved a second chance. He and Tricia deserved their second chance. Aaron agreed to help. He was going to do everything he could for Nathan and in the meantime, the Warden was handling her own issues. She tried to regain an endorsement for her wife.

Warden Masry failed to do so. Her actions and that of Aaron’s also ensured her wife lost another endorsement while they were at it. Masry didn’t know that Aaron was suing the Prison Board. He was doing it to get Nathan married and so the Warden later spoke with Aaron. She couldn’t be seen helping him. She told him as much and so he promised to make her look like she’s tough on him. Even if she didn’t mind Nathan and Tricia getting married. The hearing for that had forced Aaron to push his own case back. He didn’t mind because he set on helping Nathan. Nathan’s case was tricky. Aaron had to show that Nathan was discriminated against when his marriage was turned down.

Aaron put the Warden on the stand. He grilled her and they went over why Nathan’s request was denied. It was denied because he was considered violent. They thought he violent because of a fight that happened five years ago and that in which it was ruled he was acting in self-defense. Aaron also made sure the court heard how the Warden’s recommendation was usually all that was needed for weddings. The Prison Board never intervened before. They only did so now because it was Nathan and so what made Nathan so special? Aaron asked that in court. He laid his whole case out and it pointed to the unfairness that Nation was being treated differently.

The judges ruled. He believed Nathan deserved the right to get married and so the marriage was approved. Nathan and Tricia had thirteen years to get married. She never thought she would have to wait for him this long and she talked to Aaron about it while they waited for a verdict. If she could go back, Tricia wouldn’t have chosen to wait. She would have made other choices because the one she made with Nathan was just too unfair for her and so that made Aaron think. He thought about Marie. He questioned whether it was fair to keep her waiting for a divorce. Aaron was able to focus on his case as well as his life after he helped Nathan.

Aaron later went back into court for himself. He waited and waited and the defense said they couldn’t find Angelo. He had been available several days ago, but now it seems like he’s in the wind and there’s nothing Aaron could do about it.

Aaron was feeling down when Nathan asked him to be his best man and he agreed to do it.

The wedding had been beautiful.

& they got to spend the night as a married couple.

The Warden agreed to give that to them in spite of how it looks to the people endorsing her wife. But Aaron signed his divorce papers and he gave them back to Marie. He realized he couldn’t ask her to wait.