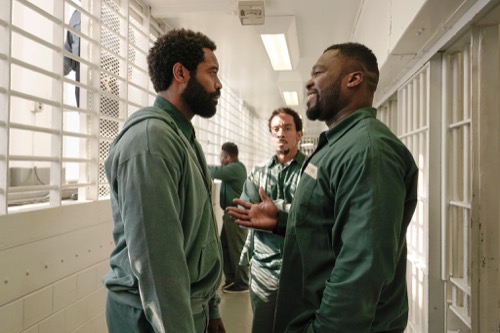 Tonight on ABC their new legal drama For Life inspired by the life of Isaac Wright Jr. airs with an all-new Tuesday, April 7, 2020, episode and we have your All Life recap below.  On tonight’s All Life season 1 episode 8 “Daylight,” as per the ABC synopsis, “Aaron defends Cassius Dawkins when he puts white supremacists in the hospital. Marie grapples with her feelings for Aaron.”

Aaron is finally going to sign the divorce papers. He needs to tell his daughter but he doesn’t have his phone. He is finally ready to let Marie go free. He meets with Henry, who notices Aaron’s mood. He tries to give him a pep talk and also tells him how he screwed up a case years back. He doesn’t want Aaron to do the same.

Henry meets with Safiya. He wants to have an inmate transferred to work with Aaron. She appears hesitant but agrees to try. Meanwhile, Cassius is cornered in the shower. He takes out the three men but ends up in trouble. He needs Aaron’s help for his trial.

Aaron speaks with Safiya, telling her he is taking Cassius’ case. Marie talks with a friend. Aaron is finally signing the papers but she isn’t so sure about this it seems.

An inmate in the jail is burned on the forearm by an inmate. It seems it is all Cassius’ doing. Safiya knows this and demands he has communication with his crew cut off. He is sent to solitary. Aaron comes to see him. Aaron tells him after this latest stunt, his best defense is to testify. He doesn’t want to be a snitch. Aaron tells him it’s his only choice.

Aaron finally talks to his daughter and tells her that he is letting her mother go. His daughter is very upset. Aaron visits Safiya after to plead his case for Cassius in solitary. She fights him but it looks like she is going to give in.

At lunch, Jasmine confronts her mom about her dad when Darius gets up to take a call. Jasmine tells her she cannot divorce Aaron, he hasn’t even had his retrial yet. She begs her mom to admit she doesn’t love him. Marie sits silent.

Henry goes to visit an old friend to get the name of a cop. Meanwhile, Marie buys more time with Darius by telling him Jasmine is upset and needs more time.

Aaron arrives to see Cassius for his trial. Cassius tells him he was nothing on the outside, but inside he has power. Aaron just wants out to see Marie and Jasmine.

At Cassius’ trial, Aaron cross-examines each of the men Cassius says attacked him in the shower. Safiya shows up for the hearing. After Cassius looks bad when he speaks, he tells Aaron they need more time. They agree to give them a day. After, Safiya gives her COs a talking to. It sounds like Cassius has been dominating the phones with his men. She expects her men to report this to her.

Cassius tells Aaron he needs to talk to the CO, push him a bit. He’ll agree to perjure himself. Aaron isn’t comfortable with any of this.

Henry finds his retired cop. He pretends to recognize him by chance at a bar. Just when it seems he might get some of the information he is looking for, the cop tells him to go.

Marie tells Darius she has to work late. It seems like he is avoiding him. He asks Jasmine about dinner, mentioning how much he loves Marie.

Aaron confronts the CO, giving him a message from Cassius. The CO cries telling Aaron how Cassius’s men held his family at gunpoint.

At the hearing the next day, the CO speaks on Cassius’ behalf and shares that it was the other men who premeditated the incident. He also found a weapon but it fell into the toiled. He was embarrassed he lost the weapon. He made a mistake. Safiya is angry with this turnaround and comments to Aaron after that he sold his soul.

Cassius gives Aaron his phone back, telling him he is valuable to him. Meanwhile, Henry visits the home of the man he has been looking for. He finds out that the man died years ago. His wife gives him a box of files and asks him to do the right thing so her husband can rest easier.

Darius packs his things and leaves a card and a ring box on Marie’s bed.