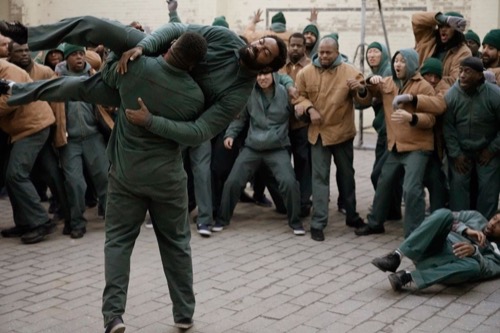 Tonight on ABC their new legal drama For Life inspired by the life of Isaac Wright Jr. airs with an all-new Tuesday, April 28, 2020, episode, and we have your All Life recap below.  On tonight’s For Life season 1 episode 11 “Character and Fitness” as per the ABC synopsis, “Aaron bolsters his case with newfound information from Marie but finds himself torn between two worlds when Cassius suspects Aaron is a snitch and seeks retribution.

Foster struggles to lay low during his last two weeks before retirement, but Safiya turns up the heat, confiscating religious texts to stop the drug trade.”

It appears there has been a riot. Aaron is down on the ground trying to help his best friend Jamal as he bleeds.

Earlier, Aaron talks to his best friend about his case. Meanwhile, Foster comes into work. All of his fellow officers have thrown him a party with a cake. They can’t believe that he is done after 32 years.

Safiya tells Aaron about Foster retiring. She wishes during Cassius’ case he would’ve left but he waited two weeks. Aaron tells her that he has filed an appeal in his trial and that’s all he’s focused on. She thinks that something bad is going to happen in the prison but he reminds her prisoner’s prison and there’s always going to be corruption.

Out in the yard on break, Aaron tries to focus on his trial but other inmates are bothering him because they to want to know about foster and Cassius.

Marie and Henry pay Aaron a visit. Marie has figured out that the girl who supposedly overdosed back at the club was actually 18 at the time but for some reason the cops never had her testify. They also have discovered that her dad is a hedge fund billionaire.

Marie believes that it was a political favor. Aaron is so grateful to Marie. Henry steps away for a minute to give them a second. She tells him that Darius has moved out. She wasn’t ready to give him what he was looking for.

Back at home, Darius comes to get his things. Marie doesn’t really want him to leave but he tells her they can figure it out later after Aaron’s re-trial.

Aaron is on the phone about his case when he gets word that Jamal was jumped in the kitchen. Aaron gets so angry but Jamal tells him to stay away. If they stay away from each other then Cassius won’t try to attack either one of them. Frankie lay in the prison hospital after overdosing. They have found fentanyl under his tongue.

Safiya talks with Aaron about what’s going on. She’s going to take everybody’s religious books. She’s put it together that that is how drugs and other paraphernalia are getting into prison. He thinks that’s a bad idea. She reminds him that he needs to help her since he represents all the prisoners.

Cassius finds Jamal at lunch and threatens him. He talks to Foster after. The two make a deal and by the sounds of it, Aaron is going to be framed as a rat.

The guards collect their religious books. Some of the prisoners are angry at Aaron, he is the prison rep. Safiya comes to tell him she hasn’t found anything yet and needs more time. Aaron is annoyed.

Darius visits one of his and Aaron’s old friends, a partner from the club. Darius asks straight up if he had anything to do with the club. He admits it wasn’t Aaron at all. Darius cannot believe he would let him rot in jail.

Jamal and Cassius reach an agreement. Later, Jamal meets with an old love during visitation. They are still in love but Jamal had to cut him off. They hold hands. The other inmates stare. Jamal tears up a bit before telling him to forget about him. He gets up and leaves.

Foster talks with a fellow guard. They meet up in the bathroom. Foster leaves and is seen on camera with a bible. Safiya and the other guards are watching.

Jamal gets ready for war in his cell. He duct tapes a magazine around his abdomen. Meanwhile, Darius has arrived to see Aaron who takes off fast to go to the gym after seeing a note in his cell. Before Jamal gets outside he is frisked by Foster who lets him go. Aaron arrives shortly after and sees Jamal strike and cut Cassius. The two fight. Aaron intervenes as Jamal loses the fight. Cassius gets into a fight with some others. Aaron stays with Jamal screaming for a medic when he is hit in the head with a weight. Wild Bill’s men jump all over Cassius.

Darius calls Marie concerned. He has no idea what is going on. Aaron is bleeding. The prison goes into lockdown. Later that night, Darius checks back with Marie and Jazz. There have been fatalities but they won’t say who. Darius finally tells her that he knows Aaron is innocent. He came to make things right with him.

The guards clean up the scene. Wild Bill is dead as well as a guard. Jamal is transported in the. ambulance. Aaron lay on a gurney, unconscious, and bleeding.