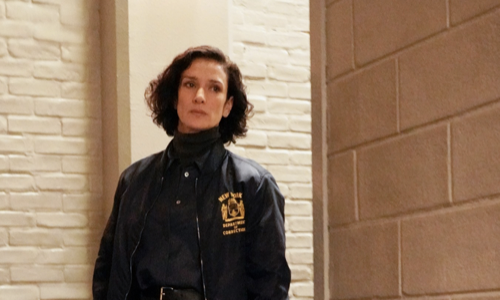 Tonight on ABC their new legal drama For Life inspired by the life of Isaac Wright Jr. airs with an all-new Tuesday, May 5, 2020, episode, and we have your All Life recap below.  On tonight’s For Life season 1 episode 12 “Closing Statements” as per the ABC synopsis, “Aaron finally gets a chance to argue his retrial in court but it’s thwarted by the return of prison warden Cyrus Hunt; Safiya deals with the aftermath of the prison riot and attempts to salvage her reforms.”

Somehow this is all going to get blamed on the Warden. Prison Warden Safiya Masry dealt with her first-ever riot and she had tried to get it under control. She tried to go through the procedures. She did everything right and still, people died. Three prisoners and one correction officer died. They all died because of the riot and the riot happened because of Officer Foster. Foster frisked down Jamal Bishop. He made Vasquez step aside as he did and he “missed the shiv”. Jamal had had a shiv on him. He later used that shiv to go after Cassius Dawkins and it was this one action that kicked off the riot.

Foster was questioned about his involvement in the riot afterward. He was asked why he ordered Vasquez to stand down and why frisked Jamal himself. Foster was grilled. He was asked about everything and he couldn’t come up with a plausible lie. Foster was later arrested for his involvement. He was marched out of his own prison in cuffs and not even his own people stood up for him. Masry had been happy to finally take down the dirty officer, but his corruption case came with repercussions for Masry because she was being blamed for missing the problem and so she was going to have her own hearing. Masry was going to have to explain herself to the board.

Masry also had to step down as Warden in the meantime. Her job was given back to Cyrus Hunt and he has his own way of doing things. Hunt wasn’t going to allow Aaron to go to court. He wasn’t going to allow of Masry’s programs to go ahead and so it was a return to the old days. The prisoners were no longer safe. Their rights were going to be ignored and everyone involved in the riot was going to be thrown into solitary. Hunt’s way of doing things wasn’t going to help anyone. It was actually going to do more harm and so Masry found ways to work around him. She put in a transfer order for Aaron.

He was transferred to Rikers. Which was closer to the courthouse and it would allow him to go through with court. Aaron was almost stopped at the gate, but there were some guards that liked him and they even liked Masry and so they snuck him out. Aaron went to Rikers. He got out from under Hunt’s thumb and he was one of the lucky ones. Hunt used his newfound authority to bury evidence against the guards. He took control over the prison and he made the guards loyal to him. Hunt was clearly thinking of the future. He assumed like everyone that Masry was going to be blamed for everything and that he would become a permanent fixture at the prison.

Only Masry still had a few friends. She spoke to some of the prisoners before she left and she found out the real story. She found out Dawkins had approved Jamal having a shiv. He had wanted Jamal to attack Aaron and Jamal played him. Jamal didn’t go after Aaron. He instead went straight for Dawkins and that how he was able to get close enough to seriously injure the other man. Masry had found out the whole story and there was nothing she could do about it. Masry wasn’t in power anymore. She had to clear out and she ran into the press while she was leaving. They all demanded to know what will happen to her now that her plans have blown back in her face.

They didn’t exactly phrase it that way, but that’s what they thought and that’s what Maskins’s people were implying. Maskins and the press were using this incident at the prison to take down Masry as well as her wife. They were trying to sink everyone’s careers. They also used this to take down Aaron and Hunt had found out he had been moved to a different prison. He hadn’t liked that. Hunt still hates Aaron after all. He knows that Aaron was the one that got him removed from the prison the first time around and so Hunt wanted revenge. He had Aaron transferred back to the prison. He then held Aaron in solitary and this cut him off of the rest of the world.

This only means Aaron couldn’t go to court. He was now stuck at the prison and this came at the worst possible time. Aaron had already reopened his case. He was going to prove that people lied about his involvement in the drug trade and he had hoped to take down the District Attorney that put him in prison. Aaron thought he was finally going to get his day in court and unfortunately Hunt was now going to ruin that for him. Hunt was in charge. Masry wasn’t and yet that didn’t stop Masry from investigating. Masry wanted to know how Dawkins came to her prison. Dawkins was trouble from the start and she believed he was planted in her prison to take her down.

But Masry was considered damaged goods and so there’s no way she’s getting her job back.