General Hospital Spoilers: Ava About to Win Prenup Infidelity Award – How Long Before Nikolas and Britt Hit the Sheets? 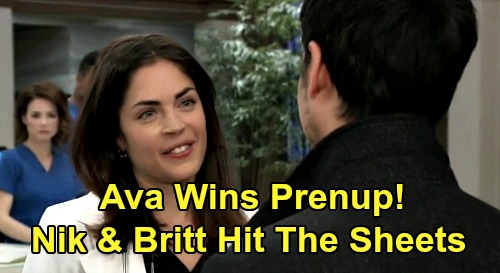 General Hospital (GH) spoilers suggest that Ava Jerome (Maura West) just may be about to win in the horrible push-and-pull game she and her husband Nikolas Cassadine (Marcus Coloma) have been playing. As many viewers know, Ava and Nikolas have a prenuptial agreement where the two came to an understanding that if there were any marital infidelity, the innocent party would walk away with everything.

Now, GH viewers may agree that Ava might have had an “Aha!” moment when she recently saw an interaction between former lovers, Nikolas and Britt Westbourne (Kelly Thiebaud)!

GH fans know that over the course of the past few months, Ava and Nikolas have seemed to push one another toward others in an attempt to ruin the loveless marriage they share.

On multiple occasions, GH viewers have seen Ava watch Nikolas’s interactions with other women like a hawk. Whenever she’s seen Nikolas talk to others, the look on Ava’s face hasn’t only been one of contemplation, it’s actually been one of eagerness.

After all, even though Ava and Nikolas were close at one time, their friendship has since descended into a dark place. (There have been hints recently that this might change, but it hasn’t transformed yet.)

If Nikolas would just sleep with somebody outside the marriage, Ava will be free! In any event, recently Nikolas has been getting his talk on with more than a few of his former ladyloves. Take Elizabeth Webber (Rebecca Herbst), for example. While Nikolas certainly had a relationship with Elizabeth, she was actually more than just a lover. He’s known her since they were teens!

The wheels of Ava’s mind have had to be turning. Right? Of course, GH fans may feel that Ava might not have to push Nikolas too hard when it comes to Elizabeth.

However, Elizabeth is married to Franco Baldwin (Roger Howarth) and is thus technically unavailable, she’s also super angry at Nikolas for a variety of reasons. She would make a hard target then, from Ava’s point of view. This may not actually be the case with Britt!

General Hospital Spoilers – Britt Could Be a Better Bet

Now, GH viewers saw Britt completely go off on Nikolas in recent episodes over the Good Cassadine’s treatment of his son, Spencer Cassadine (Nicolas Bechtel). In fact, Britt got physical and slapped Nikolas’s face quite hard. Obviously, her emotions got the better of her.

GH viewers who have watched the show for a long time know that this is actually an issue that Britt and Elizabeth agree upon despite their disdain for each other. (Both care for Spencer a great deal.)

In any case, Ava was right there during the altercation between Britt and Nikolas. Both Ava and Nikolas were obviously surprised to see Britt back in town. However, now that she is, Ava’s calculations might just see Britt as a better option. Nikolas may never have gotten over Britt. (It can be argued that Nikolas may have wanted Britt more than she actually wanted him.)

The only real question is how hard it would be to get Britt interested in Nikolas once more. Judging by the raw emotions on display during Britt and Nikolas’s altercation, the two still have chemistry and a clear sexual tension between them.

It could be that Ava pushes Britt and Nikolas together in the very near future. Then again, if Britt and Nikolas’s past is any indication, Ava may not need to push at all. CDL will have other exciting General Hospital spoilers, news and updates to pass along.