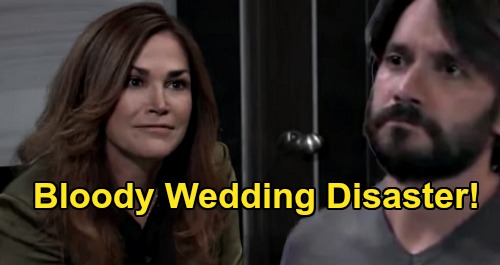 General Hospital (GH) spoilers reveal that two seemingly unrelated returns could actually be on a collision course! Let’s consider some big comebacks and how they could cross paths for a dangerous disaster. There are some crucial puzzle pieces that just might fit together down the road.

For starters, we’ve got Hamilton Finn (Michael Easton) and Anna Devane’s (Finola Hughes) wedding, which is clearly going to set the stage for calamity. Peter August (Wes Ramsey) will be there – and that means Dante Falconeri (Dominic Zamprogna) may be lurking.

Since the subject of Dante’s mission is Peter, you can bet he won’t be letting Peter out of his sight very often.

Dante has been conditioned to “complete the mission” – and it seems he’s triggered by the simple click of a pen. If that doesn’t spell trouble, we don’t know what does!

Bottom line, we’ll be surprised if shots aren’t fired at Finn and Anna’s nuptials. It seems like the prime place for some exploding chaos. That brings us to another return, which could fit in with all this drama.

Kim Delaney may be new to the role of Jackie Templeton, but she’s actually a recast since Demi Moore last played the part from 1982-1984.

Jackie is Finn’s stepmother and Harrison Chase’s (Josh Swickard) mom, so she’s bound to wind up attending Finn and Anna’s ceremony. Finn will inevitably cave to Chase and Anna’s pressure, even if this isn’t what he really has in mind.

That could put Jackie in the wrong place at the wrong time if Dante and Peter’s battle erupts in gunfire.

Could Jackie get hit by a stray bullet at the wedding? Dr. Kirk (Christopher Cousins) warned that innocent victims could get caught up in this Peter destruction plot. That’s not what Dr. Kirk wants, but he knows it’s a possibility.

Dante is a wildcard when he’s in this conditioned state. He’s a loaded cannon, so it makes sense for General Hospital to let someone innocent take a hit – just as they foreshadowed.

That someone could easily be Jackie! Just imagine Finn rushing to save the life of the stepmom he hates. This could bring a major crisis at GH, where Finn could become Jackie’s hero.

Is this how GH will help Jackie and Finn move beyond the past? Will Finn have to save Jackie after a bloody wedding disaster? We’ll offer updates as other news rolls in.