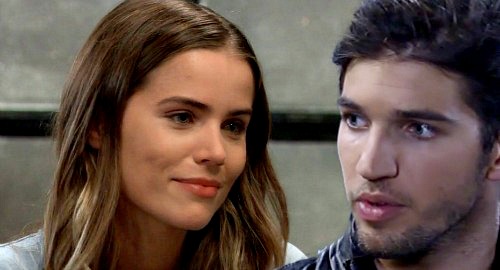 General Hospital (GH) spoilers tease that the ABC soap could soon have a romantic dilemma that could be solved by Bryan Craig’s return as Morgan Corinthos. GH fans know Harrison Chase (Josh Swickard) is currently paired up with Willow Tait (Katelyn MacMullen). Sadly, “Chillow” seems poised for a split. The writing’s on the wall for Willow to get together with Michael Corinthos (Chad Duell), so where does that leave Chase and Sasha Gilmore (Sofia Mattsson)?

Surprisingly, it may not leave Sasha and Chase as a couple. General Hospital hasn’t really given any indication that these two might become an item. It seems like it’d be the natural route to take, but that doesn’t appear to be what GH has in mind so far.

Michael and Willow have been bonding like crazy – and will have another reason to do so down the road. After the truth about “Wiley Cooper-Jones” (Erik and Theo Olson) comes out, Willow’s going to be crushed. Michael will be angry over Willow’s pain as well as his own, but one thing’s for sure: he’s not going to leave Willow out of “Wiley’s” life.

After “Wiley” is revealed as Jonah Corinthos, Michael won’t just cut off contact. He’ll undoubtedly make sure Willow still feels connected to “Wiley” – or Jonah depending on whether Michael switches the name back. Willow can still play Mommy to “Wiley” and grow closer to Michael in the process.

General Hospital fans can see all that coming from a mile away, but Chase and Sasha just don’t seem to be on the same romantic path. Brook Lynn Ashton (Amanda Setton) appears to have a fling with Julian Jerome (William deVry) coming up, but what about after that? GH may have laid some groundwork for a Brook Lynn and Chase pairing recently.

Brook Lynn was taken into custody after bashing Chase in the head at The Floating Rib. The exploding tension between them was comical, fun and exactly the kind of thing that could set up a romance later. If Chase ends up being paired with Brook Lynn, that leaves Sasha to battle heartbreak on her own.

General Hospital could just write Sasha out, but what happens if she sticks around? Should GH bring back a popular character for Sasha? There’s one option that’d definitely be interesting and that’s letting Morgan Corinthos (Bryan Craig) return from the dead.

It’d be the perfect opportunity to reestablish a brother battle between Morgan and Michael. It could rev up if Michael drifted back toward Sasha. GH could recast or possibly convince Craig to make a comeback for the right deal. It’d be great to see Morgan rejoin the Corinthos clan and perhaps find love with Sasha soon after.